Please ensure Javascript is enabled for purposes of website accessibility
Log In Help Join The Motley Fool
Free Article Join Over 1 Million Premium Members And Get More In-Depth Stock Guidance and Research
By Dave Kovaleski - Mar 19, 2021 at 7:02AM

In one key metric, it's off the charts.

There is a lot to like about Visa (V 3.13%), the world's largest payment processor. It has been an earnings machine, as earnings per share have increased nearly 20% per year over the last 10 years. Investors have seen the stock price increase 28% per year on an annualized basis over the past decade through 2020.

If you've missed out on Visa's fantastic run over the past 10 years, don't dwell on it -- there are a few good reasons why Visa will probably generate double-digit returns over the next decade, too. It enjoys a virtual duopoly in the credit processing space, along with Mastercard. Also, it has a major tailwind in the growth of e-commerce. In 2023, about 22% of global purchases will be made online, according to projections, and by 2040 that's expected to spike to about 95%.

As the world gradually moves away from cash, Visa stands to benefit as much as any company. But there is one metric that really speaks to why Visa has been able to maintain its leadership position and change with the times. If you haven't bought Visa yet, consider this. 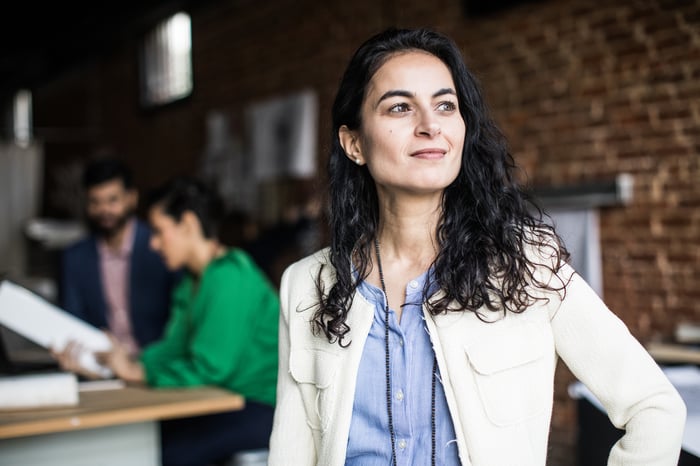 A company's operating margin is a great indicator of how well-run and efficient it is. It measures how much profit a company makes on a dollar of sales after expenses for that sale -- including production costs, salaries, equipment, materials, marketing, and more. The higher the margin, the better, as that means it is making more profit off that sale.

Some sectors are more profitable than others, but for the most part, an operating margin of 15% is considered good -- anything higher than that is very good to great. Then there's Visa. Its operating margin is off the charts at 65%. That means for every dollar it makes, before interest and taxes, it earns $0.65 profit. You won't find many margins higher than that no matter where you look.

Better than its competitors

Because payment processors earn a fee every time someone makes a purchase on their network, there is very little overhead compared to other industries. But still, even within the credit card and payments space, Visa's operating margin is extremely high. Its main competitor, Mastercard, has a margin of 53% -- which is great but obviously a step below. Discover Financial Services and American Express have operating margins of 26% and 14%, respectively (although they offer other services that cost more to operate), while payment provider PayPal is at 16%.

It shows us that Visa has been able to maximize profits with its low-cost business model. But beyond that, it's a sign of stability. With such consistently high margins, investors can feel confident that the company can remain profitable even during the worst economic periods.

In addition, a high operating margin means that the company is generating a lot of free cash flow, which is the cash left over after all capital and operating expenses are paid. That cash can be used to pay off debt; invest in new technology, equipment, or acquisitions; or give back to investors in the form of dividends.

The company's operational efficiencies, combined with its status in the industry and expected growth of the market, make Visa a stock to consider.