Align Technology provides a luxury product that consumers are willing to pay up for.

As the coronavirus pandemic took hold, I for one became more and more worried about previously commonplace activities -- such as going to the dentist. And as the financials of Align Technology (ALGN -0.48%), the parent company behind Invisalign clear dental aligners, will show, I'm not the only one.

Logic might suggest that Align would have taken a hit in the throes of COVID-19, because using Invisalign requires a doctor's note -- something it was previously the norm to get at an in-person checkup. But according to the data, it was actually remarkably resilient. As a locked-down economy opens up, management may find themselves in a backlog!

Data from the company's EDGAR filings show that it was able to successfully transition more doctors to a digital interface than had used that interface the year before. This has implications for its future productivity, as well as its current success. 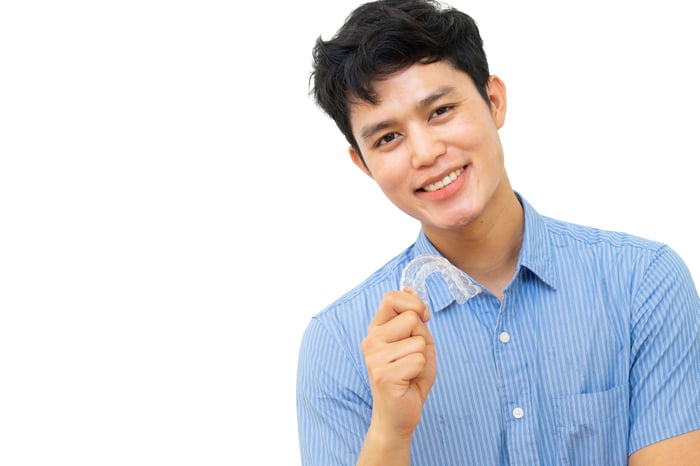 Here's a look at some key metrics for Align over the past few years.

As you can see from the table above, Align posted record highs for revenue and net income in fiscal 2020. There is one caveat -- the income number was inflated by a one-time gain from the recognition of a deferred tax asset. However, we can see that gross profit in 2020 was still higher than in 2019. Lower income from operations last year was the result of increased hiring throughout 2020, including stock compensation and other costs related to that 21% hiring binge during the year. Additionally, 2019's income was slightly inflated as well due to a one-time $51 million litigation settlement in Align's favor.

The bottom line is, after accounting for these items, Align still looks very attractive given its dominant positioning -- the company had captured 29% of the clear aligner market as of 2019.

Thriving in the space between

Invisalign falls into one of those "in-between" categories of healthcare, a procedure that's generally not medically necessary but that consumers are willing to pay up for, similar to high-end cosmetic surgery. I expect dentistry in general to be one of the first areas to snap back after lockdowns.

As the trailing 12-month numbers show, even through COVID, Align's growth looked great on both the top and bottom lines. The stock trades at a price-to-sales multiple of 17 right now, which may sound lofty, but is actually lower than 76% of companies in the medical devices industry. What's more, the increase in revenues is supported by unit sales growth, buoyed by a strong performance from international transactions and emerging business in Asia.

Who else is out there?

That all sounds great, but what about the competition? After all, businesses with a 70% gross margin don't grow on trees -- and they're unlikely to exist in perpetuity, as competition should theoretically drive margins down to zero.

While pressure from upstarts such as SmileDirectClub (SDC -6.25%) does present very real challenges for Align, it's heavily mitigated by two things: Align's superior capital position and profitability (SmileDirectClub is still generating losses), and the "alignment" between Align and the doctors who facilitate its use. (SmileDirectClub does not mandate that a doctor's note be obtained in order to use its products, but Align does.)

While SmileDirectClub's products are cheaper, I believe these two companies serve two distinct bodies of consumers. Align's customers are looking for less cost-efficient but more aesthetically pleasing results, and they're willing to pay up for that potential outcome, whereas SmileDirectClub users are more value-oriented. Happily, the market for these products is so large -- with so much untapped growth potential, particularly internationally -- that there is more than enough room for both companies to prosper.

Let's take a look at Align's market penetration in the U.S. versus the rest of the world. Currently, the company's roughly 6 million U.S. customers make up 2% of the country's population. If we say the rest of the world's population is 6 billion (conservatively) and assume Align could just get to 0.5% penetration -- 75% less than it's achieved in the U.S. -- that would mean an additional 30 million potential international customers to target.

Invisalign management estimates that there are 500 million smiles, globally, in need of their products, and a back-of-the-envelope calculation of 20% of the U.S. population suggests that it contains 67 million unique grins without an ideal bite. All of this is to say that there is a long runway for growth domestically as well.

Align yourself with profits

Align is providing a service customers are willing to pay up for, and its remarkable success during the pandemic points toward even further growth once lockdowns are lifted. There are other potentially attractive companies in the space, but for healthcare investors seeking red-hot growth on a solid foundation, Align looks like a clear winner.

Is Align Technology a Buy?