Please ensure Javascript is enabled for purposes of website accessibility
Log In Help Join The Motley Fool
Free Article Join Over 1 Million Premium Members And Get More In-Depth Stock Guidance and Research
By Adria Cimino - Mar 20, 2021 at 6:00AM

Each is a key to future profit growth.

Even through the worst of the pandemic, Disney (DIS -1.11%) never truly lost its magic. Sure, the entertainment giant temporarily closed its theme parks and swung to an annual loss, but investors never stopped believing in Disney's future. The stock climbed 25% last year and is up more than 7% so far this year.

Those who were bullish on Disney were right. But it's not too late to scoop up shares of this much loved name. (Disney-themed parks make up the four most visited in the world, according to Statista.) Here are three reasons Disney shares are a buy. 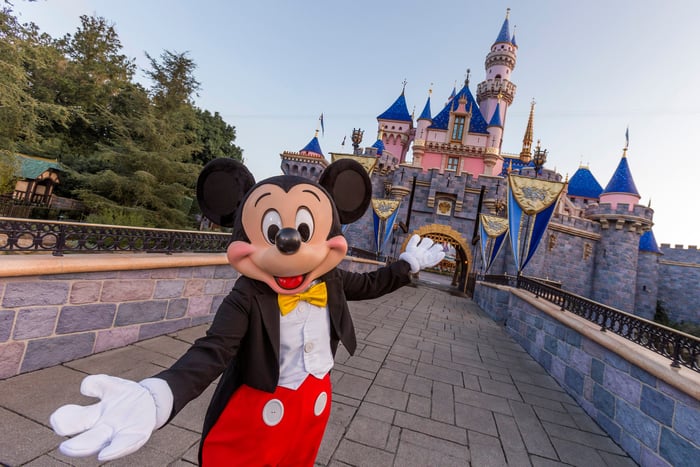 1. The magic is returning to California

The company recently said Disneyland and Disney's California Adventure will reopen on April 30. The parks have been closed for more than a year due to the pandemic. At first, they'll only be open at 15% capacity, Disney CEO Bob Chapek told CNBC. But this is an important first step to getting revenue back on track.

The parks, experiences, and products segment generally contributes the most to Disney's sales. In 2019, the segment accounted for nearly 40% of annual revenue. The company also generates sales from its films, streaming services, and cable networks. Disney reopened its Florida theme parks last July.

Those parks and Shanghai Disney were open during the most recent quarter. The Paris and Hong Kong parks were open for parts of the quarter. Disney said that even at reduced capacity, sales surpassed the cost of opening at all locations. So it's reasonable to expect the same in California.

Pent-up demand could result in guests flocking to the California parks this spring. Declining coronavirus cases and an increase in vaccinations also might encourage Disney fans to return.

2. The popularity of Disney+

Last month, my colleague Danny Vena wrote about how streaming service Disney+ may step ahead of Netflix by 2026. Digital TV Research predicted Disney's subscribers will total 294 million by that time. That's compared to an estimate of 286 million for Netflix.

I agree that Disney+ is on track to meet or beat Netflix. Disney+ recently reached more than 100 million global subscribers -- that's after only 16 months of operation. Chapek recently called the direct-to-consumer business -- which includes Disney+ -- the company's "top priority." He also said the company's goal is to launch more than 100 new titles per year across the streaming service.

In the most recent quarter, the direct-to-consumer business posted a 73% increase in revenue year over year. Investment to expand Disney+ has weighed on earnings, though. The segment reported a $466 million operating loss in the quarter.

Still, that was down from a $1.1 billion loss a year earlier. I expect big investment now to result in big profit down the road for this segment.

3. A focus on e-commerce

Disney recently said it will close at least 60 physical stores in North America this year -- and turn its focus to e-commerce. This is a smart move considering growth in online shopping.

Online shopping saw a major surge last year due to the pandemic. Even as the crisis eases, consumers still may favor this way of buying essentials and discretionary items. McKinsey & Co. research shows that consumers intend to continue shopping on the internet post-pandemic. Online shopping rose 21.9% last year and may increase between 18% and 23% this year, according to the National Retail Federation.

Disney will benefit by meeting fans where they're most likely to shop now and in the coming years -- in the comfort of their own homes.

Investors will have to be patient to see the fruit of these three efforts reflected in Disney's earnings reports. It's going to take a while to restore revenue and profit levels. But Disney has the tools needed to get there. And that's why right now is the time to invest in Disney's future success.