Please ensure Javascript is enabled for purposes of website accessibility
Log In Help Join The Motley Fool
Free Article Join Over 1 Million Premium Members And Get More In-Depth Stock Guidance and Research
By Zhiyuan Sun - Mar 20, 2021 at 7:55AM

This healthcare tech company has helped consumers save a cumulative $25 billion on prescription drugs. But that doesn't necessarily make its stock a buy.

GoodRx (GDRX 6.49%) has proved to be a rather disappointing IPO. From its September debut till now, its shares have fallen by about 27%, while the S&P 500 gained 21% over the same period. In the past three years, GoodRx was consistently one of the most downloaded medical apps, with an average score of 4.8 out of 5 from over 700,000 reviews on Google Play. Given these spectacular results, many investors are wondering: What gives?

As it turns out, the company faces significant risks in the near future. Investors should know that as exciting as GoodRx is, its stock is far from having million-maker potential. 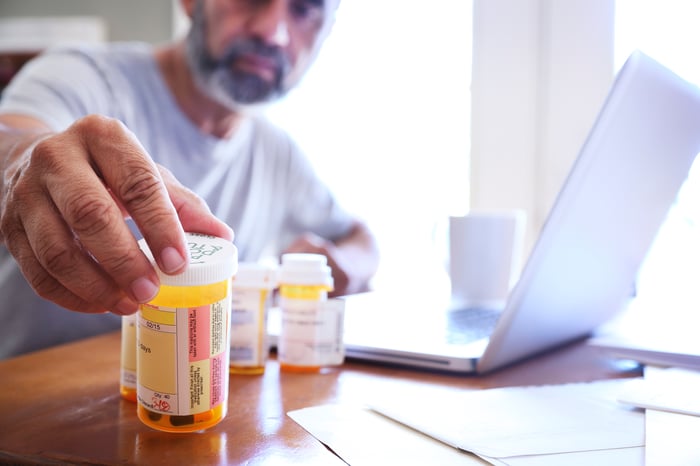 A great business, but...

The company helps Americans fill their prescriptions at reasonable prices -- serving both those without health insurance and those who are insured but may not be able to afford their co-pays. Its website gets as many as 18 million visitors per month, and the company partners with more than 70,000 pharmacies across the nation. More than 80% of purchases on the platform are from repeat customers.

The best part of GoodRx is that it offers up to 70% discounts on drugs via just its free version. The company takes a 15% commission from the cost of prescriptions as it refers customers to local pharmacies. In addition, the company offers monthly (Gold tier) and annual (Kroger Rx Savings Club) subscriptions. The Gold version gives patients access to more than 1,000 prescriptions for less than $10. Meanwhile, the Kroger version enables patients to access over 100 generic medications for $6 or less (some are free) at the supermarket chain's pharmacies, and provides discounts on over 1,000 more.

The healthcare tech firm is also expanding its middleman business model into telemedicine. It compares prices among virtual consultations from multiple providers and offers the lowest ones available to its customers. GoodRx now brokers more than 1,000 telehealth visits per day.

In 2020, GoodRx's revenue increased by 54% to $551 million while its operating income less non-cash expenses (EBITDA) rose 61% to $203 million. This year, the company projects to grow its sales to $755 million and anticipates its EBITDA margin will exceed 32%.

The main problem is that e-commerce giant Amazon (AMZN 4.11%) is also making a move in the Rx sector with the launch of Amazon Pharmacy. The service allows Amazon Prime members to save up to 80% off generic drugs and 40% off branded medications without insurance.

The e-commerce giant is also partnering with over 50,000 pharmacies across the nation to allow its members to save over 80% off the list price of drugs there. In addition, Amazon is also offering free two-day delivery of the said drugs. Given its track record of disrupting middle-men services and brick-and-mortar retailers, the company could easily crush GoodRx's revenue growth.

Moreover, Amazon's stock is only trading at 3.2 times revenue, compared to GoodRx's 19.5. The Seattle-based online retail giant also has entire business segments outside of pharmaceuticals, making it is well diversified. Overall, this makes Amazon stock a better buy over GoodRx in almost every aspect.

If that wasn't bad enough, pretty soon GoodRx could become severely restricted in terms of growth since its business model is valid only in the United States, which remains the sole developed nation in the world that does not provide universal healthcare for its citizens. Everywhere else, regulatory agencies set the prices of new or generic drugs based on a cost-benefit analysis. If pharmaceutical giants refuse to sell their drugs at those prices, government negotiators can simply walk away, depriving the companies of entire nations of potential customers.

Paying 20 times revenue for a company with limited growth potential is not something I can recommend. I don't doubt that GoodRx's services are immensely useful and life-saving in the U.S. However, until the company can show that it has a place in international markets, I would avoid this stock.