Please ensure Javascript is enabled for purposes of website accessibility
Log In Help Join The Motley Fool
Free Article Join Over 1 Million Premium Members And Get More In-Depth Stock Guidance and Research
By Alex Carchidi - Mar 21, 2021 at 7:33AM

Innovation is risky, and these companies are all in.

Medical diagnostics is not the buzziest sector around. Even as increasingly advanced technologies pave the way for earlier and more effective identification of diseases, much of the industry's progress is hidden away from the public, locked in the back rooms of hospital laboratories and clinics. But investors don't need to stay on the sidelines if they're willing to learn about what's up-and-coming.

The three companies I'll discuss today are making highly innovative products that are significantly different from the competition, in terms of either their cost or their features. While there's no guarantee that they'll succeed in the long run, they've each gained some critical traction that portends favorably for their future. If you're looking for stocks to aggressively drive your portfolio's growth, any one of them could be a great choice. 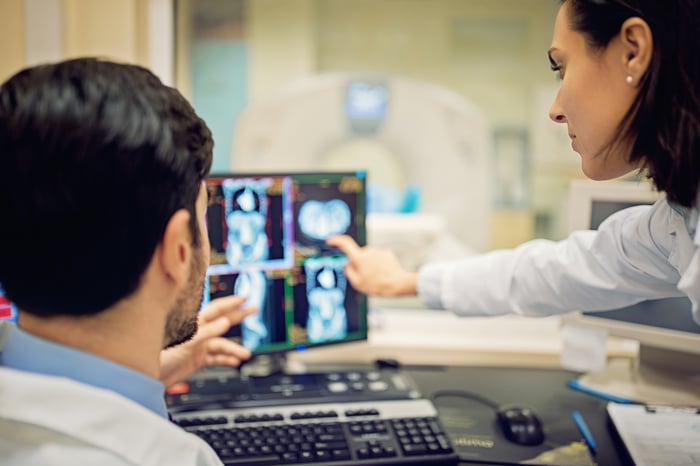 Microeconomics holds that as the cost of a product or service drops, demand for it tends to increase, and that's exactly what Nano-X Imaging (NNOX 3.59%) is banking on with its cheap X-ray machines. Whereas normal X-ray devices require high up-front costs and significant ongoing maintenance expenses, Nano-X's product works on a subscription model. Healthcare providers pay on a per-scan basis, keeping capital expenditures low and scaling the profitability of their services to the same level regardless of fluctuations in demand.

This means that hospitals in the developing world will flock to the company's machines, as they won't need to accumulate a big chunk of change before contracting with Nano-X and installing the X-ray imagers. It also means that Nano-X is positioned to sell new imaging devices to its customers using the same business plan, which could drive long-term recurring revenue. Finally, the company will have a competitive advantage over traditional X-ray manufacturers that can't deploy their products as cheaply or as (financially) flexibly in comparison.

So, what makes the stock especially worth considering in 2021? Late last year, the company passed a critical proof of concept when it demonstrated its X-ray device in a live presentation. Before that, it wasn't clear whether its technology could provide comparable results to standard machines -- but now, there aren't any more obstacles to adoption.

Diagnostic medical procedures are often invasive and uncomfortable, but companies like Guardant Health (GH -2.09%) are looking to change that. Guardant is developing a liquid biopsy for cancer diagnosis called the Guardant360 CDx. This product will allow patients to be screened for multiple pathologies at once, and in relative comfort compared to surgical biopsies. Guardant's process also detects cancers earlier than other screens, meaning that it provides a significant advantage to patients.

It isn't the only company pursuing a multi-biopsy technology, but Guardant might be the only one whose product scans for the presence of different cancers while additionally profiling the genetic mutations of the tumors that it detects. That's especially important in the context of increasingly sophisticated personalized medicine, wherein advanced technology enables patients to get treatments that are specifically calibrated to the unique attributes of their disease. Investors will also be pleased to hear that the Guardant360 CDx biopsy already has regulatory approval, so there isn't as much research and development (R&D) risk as there might be with other stocks.

In summary, Guardant's product is likely to be a winner, and the company's primary focus in the next few years will be to increase its penetration of the market for cancer diagnostics. As long as things continue as they have, with a 28% increase in year-over-year test volume between Q3 2019 and the same quarter in 2020, it'll be in good shape moving forward -- despite the market's underwhelming reaction to its latest earnings report.

Fluidigm Corporation (FLDM -13.85%) is a little-known but highly innovative company that makes diagnostic tests as well as specialized analysis hardware for use in immunology laboratories. Until recently, its diagnostic business didn't exist, so it's a new competitor in the space. During 2020, the company quickly pivoted to take advantage of high demand for diagnostic products, selling more than 2 million coronavirus tests over the year after obtaining regulatory approval. Management plans to continue this new strategy through 2025, thereby making Fluidigm relevant for clinical practice whereas before it was overwhelmingly oriented toward the biomedical research tools market.

The good news is that its analyzer devices are projected to deliver growth, too. While sales took a significant hit during 2020, from 2014 to 2019 its CyTOF analyzers posted favorable growth year over year. Though some of the buzz surrounding the technology has faded since its initial launch, it's likely that the pandemic will boost the need for its capabilities once again. In the long run, Fluidigm might have another hardware boom in the works, but in the meantime, it'll have plenty to offer for shareholders as a result of ongoing need for its coronavirus diagnostics.