Please ensure Javascript is enabled for purposes of website accessibility
Log In Help Join The Motley Fool
Free Article Join Over 1 Million Premium Members And Get More In-Depth Stock Guidance and Research
By Travis Hoium - Mar 22, 2021 at 5:59AM

Sometimes the sticker price on a stock should give investors pause.

The stock market is near all-time highs, and there have been some incredible performances by some of the most high-profile growth stocks available today. But the market's run could leave some companies way overvalued when compared to their underlying fundamentals.

Trying to determine which stocks are overvalued can mean going against the grain of investor sentiment, but understanding the case against a stock can be valuable as well. With that in mind, here's why I think Tesla (TSLA -6.92%), Zoom Video Communications (ZM 5.61%), and Blink Charging (BLNK -5.40%) are all overvalued today. 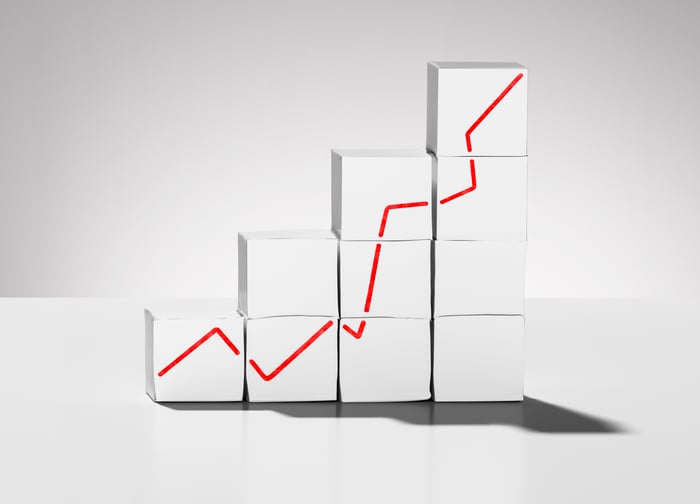 A skeptic's view of Tesla

There's no questioning how disruptive Tesla has been to the auto industry. The company has almost single-handedly forced nearly every automaker to begin to transition their fleets to electric powertrains years ahead of when it might otherwise have happened. But that doesn't mean Tesla's stock isn't incredibly expensive.

First, we need to acknowledge that despite being profitable as a whole, Tesla generates more profit from selling regulatory credits than it does from building cars. In 2020, the company reported net income of $721 million, but without regulatory credits, it would have lost $859 million. Put another way, the $1.58 billion in revenue from regulatory credits means Tesla generated $2,635 in regulatory credits from every vehicle delivered last year. I point this out because Volkswagen (VWAGY -2.47%), General Motors (GM -2.19%), Rivian, and many others are increasing their supply of electric vehicles (EVs) over the next few years, which means the demand for regulatory credits will likely go down just as the supply of credits is going up. What you have left is Tesla generating less revenue per vehicle at lower margins -- and overall, a company that's losing money.

Tesla also has a challenge in autonomous driving coming its way. The company has has begun selling its "full self driving" service for $10,000 for new vehicles, but that could be a short-lived revenue stream. Companies like Cruise (majority owned by GM) and Waymo (owned by Alphabet) already have fully autonomous cars on the road today. In fact, according to Navigant Research, Tesla is behind almost every major automaker and technology company in autonomous driving technology. It's just that companies like Waymo, Cruise, Ford (F -3.20%), Baidu, VW, Zoox (owned by Amazon), and others haven't released products to the broader public as Tesla has. When they do, Tesla's autonomy technology may appear well behind the pack. 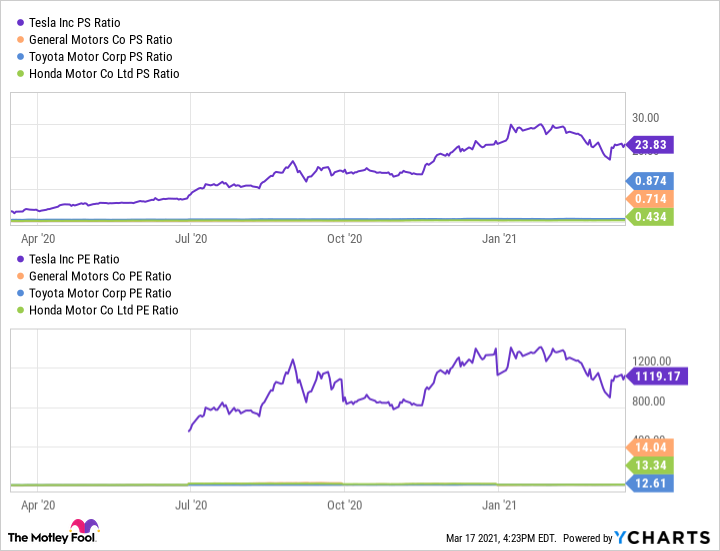 By any measure, Tesla's stock is extremely highly valued versus competitors' shares. When you add in the fact that Tesla is going to face dozens of new competitors in the EV market in the next few years, along with new autonomous driving options, this is a stock that I think is too highly valued right now. Of course, Tesla and CEO Elon Musk have proved doubters wrong before.

Is Zoom really the future?

Zoom was the surprise winner of the pandemic after tens of millions of people suddenly needed to learn how to work remotely. Zoom filled that market need and the company's revenue and share price have both gone through the roof. But has Zoom's stock gone too far, too fast?

Judging the videoconferencing specialist by traditional valuation metrics is tough right now, because a price-to-sales ratio of 38 seems high, as does a price-to-earnings ratio of 150, but a 300%-plus growth rate is almost unfathomable for a company like Zoom. 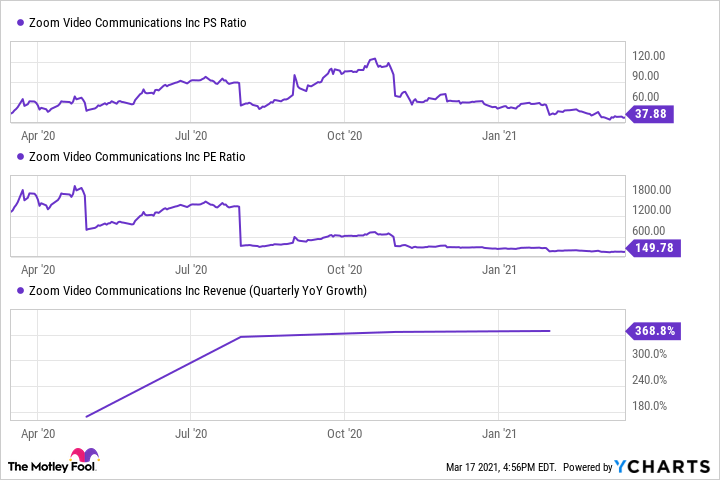 The current growth numbers are mind-bending, but what I think we need to start considering now is whether revenue actually goes backward late in 2021. Companies that have been on Zoom for a year now are starting to make plans to go back into the physical office, making Zoom less of a necessity and more of a luxury for millions of users. The people who I know that have gone remote and work with other people in a large office setting spend 6-8 hours every single day on Zoom, and that number is likely to drop 80% to 90% when they go back to the office. That data is anecdotal, but a post-pandemic world likely means far fewer virtual meetings, and that could be bad for Zoom's top line and its highly valued stock.

One of the craziest stocks on the market today is Blink Charging. The company sells EV chargers and owns a network of charging stations as well. That could be a growth business in the long term, but is it worth 236 times revenue? I don't think so. 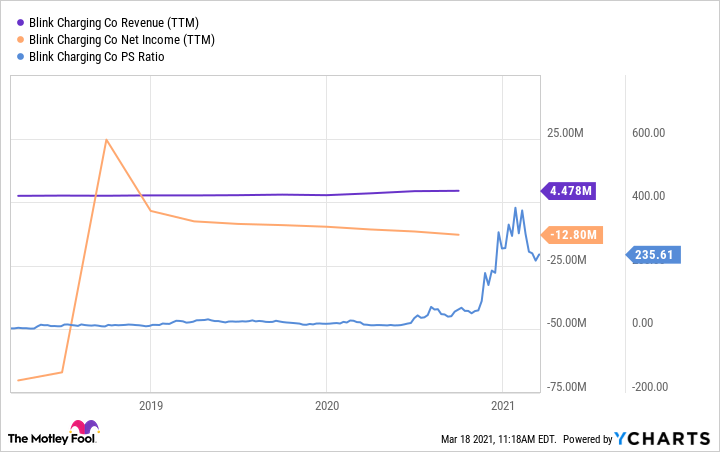 There are multiple challenges Blink Charging will have to surmount to live up to its current valuation. One is that the charging business is effectively a commodity business today. The other is that there's a lot of competition from other charging networks and even at-home charging. Long-term, I don't see how one network differentiates itself from another.

I don't question that EV sales are growing rapidly and more chargers will be needed. But with just $4.5 million in sales last year, I don't think this is a company that should have a $1.6 billion market cap today.

A high price for high growth

What each of these companies has in common is high growth. But sometimes the premium being paid for growth can be too high, and that's what I'm seeing here. Tesla, Zoom, and Blink Charging could all be great businesses long-term, I just think they're too richly valued at their current stock prices.