Please ensure Javascript is enabled for purposes of website accessibility
Log In Help Join The Motley Fool
Free Article Join Over 1 Million Premium Members And Get More In-Depth Stock Guidance and Research
By Keith Noonan - Mar 23, 2021 at 5:55AM

These companies pay big dividends, too.

The third round of direct stimulus checks is on its way, and the latest payments could trigger another surge of activity among retail investors. You shouldn't even think about investing any of your stimulus check if you might need that money to pay bills or if you don't already have an emergency fund established. But taking a buy-and-hold approach with high-quality stocks can be a great way to build wealth if you have your other financial bases covered.

With growth stocks under pressure recently, the market appears to be on the verge of rediscovering its love for companies that trade at lower earnings multiples and pay big dividends. Read on for a look at two value stocks that seem primed to thrive through volatility while delivering strong performance for shareholders. 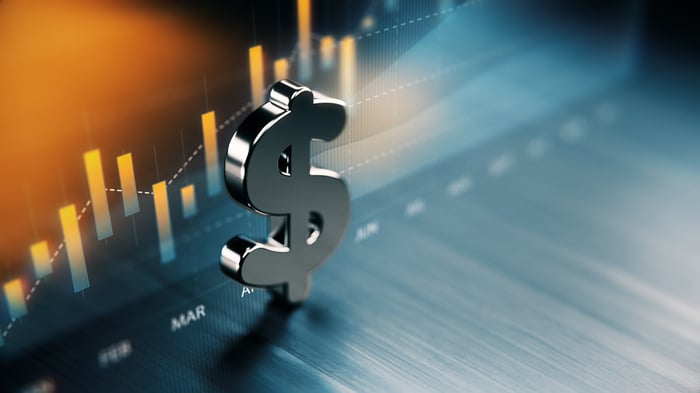 AT&T's (T 0.94%) share price has slipped roughly 22% over the last five years despite the tech-heavy Nasdaq Composite index rising about 176% across the same stretch. There are good reasons why the telecom giant's shares have underperformed in recent years. But the stock trades at just 9.5 times this year's expected earnings and pays a dividend yielding a hefty 7%, and the business has turnaround potential.

AT&T's stock woes over the last half-decade are closely tied its $67 billion acquisition of DIRECTV in 2015. Cord-cutting trends were already accelerating at the time of the merger, and bundles combining the satellite television package with the company's mobile wireless never became a big enough draw in the increasingly competitive mobile service market.

The company's $100 billion acquisition (including debt) of Time Warner has also taken longer than expected to generate big sales, with the pandemic hurting the company's film and television businesses. Complicating matters further, the HBO Max streaming service that AT&T is positioning as a competitor to Netflix and Disney got off to a slower-than-expected start.

AT&T now expects that HBO Max will have between 120 million and 150 million subscribers by the end of 2025. That's a big increase from the target of 50 million subscribers that the company first laid out in 2019, and it looks like it is seeing some more-favorable engagement data following the platform's launch last May. Warner has a strong catalog of content it can use to support HBO Max, and it's still in the early stages of bringing original content to the service.

While AT&T isn't going to transform overnight, the company's core mobile-wireless segment continues to look solid heading into the accelerating 5G upgrade cycle. And investors may be underestimating the growth potential in entertainment content and services.

With tech stocks posting such incredible performance over the last year, Hanesbrands (HBI -0.51%) has been a far cry from the most-exciting stock on the market. The company's fast-growing Champion brand has rightfully attracted some attention in recent years and has a promising outlook, but low-growth businesses like socks, underwear, and T-shirts and waning performance for some of the company's brands have understandably tamped down enthusiasm on the stock.

The business proved to be relatively versatile amid challenges created by the pandemic, managing to generate substantial revenue from switching to the production of protective masks. But the stock is still down nearly 30% over the last five years, and retail closures related to the pandemic -- combined with indications that some brands' performance is weakening -- have created some substantial headwinds recently.

Challenges aside, Hanesbrands still looks cheap trading at roughly 13 times this year's expected earnings, and its shares have a 2.9% dividend yield at current prices. The company's Champion brand has seen an impressive resurgence over the last half-decade, and it looks to have real staying power. As long as that's the case, there's a good chance that the current share price will come to look quite cheap with the benefit of five years of hindsight.

Under new CEO Steve Bratspies, there are promising signs that the company will reemerge as a leaner, more effective business built for long-term growth. The company will likely de-emphasize some underperforming brands and pursue continued cost-savings initiatives, but it's also going to make bigger advertising and omnichannel retail pushes for brands that are better positioned to drive results.

Hanesbrands is still reasonably valued and offers a strong income component. The business' turnaround initiatives could exceed expectations, and its shares offer an attractive combination of value and growth potential.