Financial technology and lending platform Upstart Holdings (UPST -9.11%) is one of the hottest stocks on the market right now. Shares are up 325% since its public debut in December 2020 and were up over 100% last week after the company reported its fourth-quarter and full-year 2020 earnings. It also announced it was acquiring Prodigy Software as it moves into the auto loan market.

What has investors so excited about Upstart? Let's take a look.

Upstart is trying to disrupt the traditional consumer lending process. This means disrupting credit scores and the other legacy options financial institutions use to evaluate whether an individual is worthy of lending to, and at what interest rate. With its large datasets and artificial intelligence (AI) platform, the company works with banks and other financial institutions to loan money in a quick and easy way with potentially lower interest rates than what someone else might offer.

Upstart has served over 698,000 customers as of the end of 2020. The majority of loans are made through its website, but increasingly the company has moved to add the technology to its bank partner websites themselves. The loan process is the same, with Upstart being the middle man between the consumer and lending institution, but the move will allow the company's technology to reach a wider audience.

Along with the year-end results, Upstart announced it was acquiring Prodigy Software, a platform that helps other companies sell online. The acquisition will help Upstart as it starts to move into the auto loan market. Its first loan was originated in September of last year, and the acquisition is supposed to be a big growth driver for the company going forward. 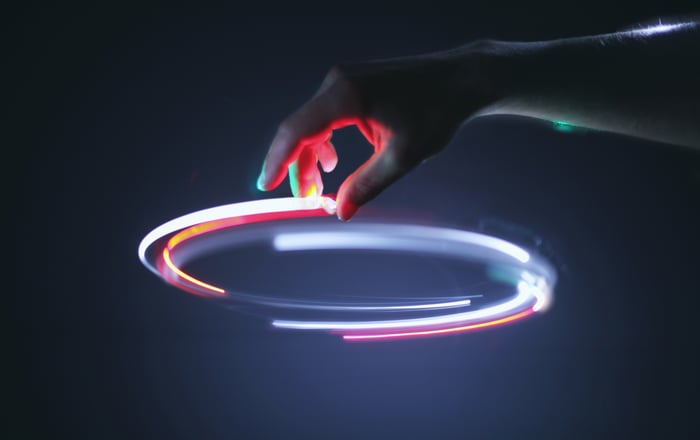 Let's go over how Upstart makes money. As the middleman between lenders and consumers, Upstart gets a fee every time a lending institution prices a loan with its technology. The loans don't sit on Upstart's balance sheet, which means it isn't assuming any credit risk when a loan is made. This means Upstart can generate high-margin revenue while running an asset-light balance sheet.

Last year, Upstart had $233 million in sales and $11.8 million in operating income. Sales grew 42% in 2020 even with COVID-19 disrupting many business operations, which is a good sign that Upstart's product is working well for its lending partners and consumers. The company is still in growth mode, so don't look at the small amount of operating income and think it will struggle to generate future profits. It spent almost $100 million on marketing in 2020 and $45 million on general and administrative expenses. These costs should become a smaller percentage of revenue as Upstart grows, indicating the company will have fat profit margins at scale.

At a current market cap of $9.22 billion, Upstart trades at a price-to-sales ratio (P/S) of around 40, which is way above the market average and its financial technology and software peers. Management did guide for $500 million in 2021 revenue, which would bring its P/S below 20, but that would still leave Upstart trading at an above-market valuation.

You also shouldn't look at Upstart's AI or machine learning claims through rose-colored glasses. Unless it has datasets that other companies can't get (which is unlikely), the core technology of lending without a credit score seems fairly imitable. Yes, Upstart may do the best job and seems to have locked in relationships with many financial institutions, but it is tough to identify where any long-term competitive advantages can come from.

Upstart looks to be well on its way to disrupting the consumer lending space. As the layer between consumers and lending institutions, it has a fantastic business model that can add value to both parties, all while retaining a high-margin piece of the pie. However, at a P/S of 40, investors need to understand that a lot of future growth is already priced in, and be cautious when looking at investing in Upstart stock after it has gone up over 100% in such a short time period.

Upstart Is Down 93% After Its Post-Earnings Crash -- Is the Stock a Buy?

2 Growth Stocks With Monster Upside of up to 190%, According to Wall Street