Shares of vaccine producer and Pfizer (NYSE: PFE) partner BioNTech (BNTX 5.63%) tumbled 6% Wednesday after it was reported that the companies' local vaccine distributor, Chinese pharmaceutical firm Fosun, is suspending distribution of the companies' vaccine because of "defective bottle lids." Pfizer stock ended the day roughly where it began it.

In other news, Pfizer announced yesterday that in the future, Pfizer intends to go solo on projects to expand its development of new kinds of mRNA-based vaccines on its own.

As multiple news sites were reporting today, Fosun says it found unspecified defects in the lids that close the bottles of a single batch of the companies' COVID-19 vaccine, batch number 210102. Out of an abundance of caution, China is not permitting the vaccines to be administered in either Hong Kong or Macao (their destinations) -- either from batch number 210102 or from a separate batch with number 210102.

With the BioNTech/Pfizer vaccine now suspended, residents of Hong Kong and Macao can only receive China's own Sinovac vaccine as it is the only other vaccine authorized for inoculation in the area. 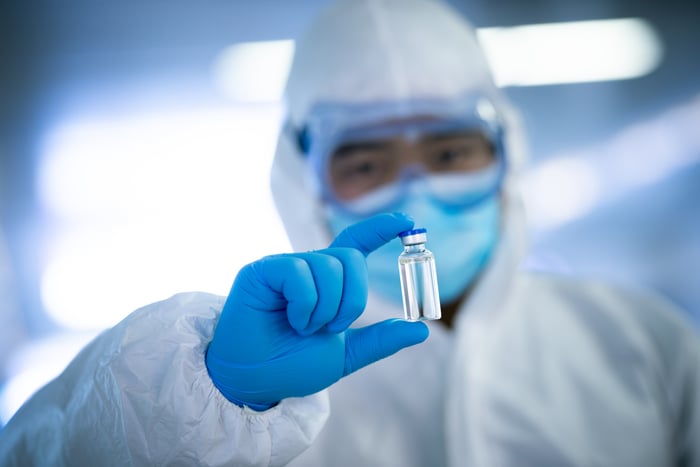 It's worth mentioning that China has already made it easier for foreigners to enter the country if they can show they have been inoculated with COVID-19 vaccines produced in China, i.e., not BioNTech or Pfizer's vaccine.  Perhaps today's suspension of vaccinations is part of a Chinese effort to favor its own vaccine over foreign-invented variants. (China has been known to suspend product import rights in the past out of political motives.) Whether that's what's happening here, just the allegation of manufacturing defects might be enough to make consumers elsewhere incrementally less inclined to take the BioNTech/Pfizer vaccine, and perhaps prefer Chinese-made vaccines instead.

In combination with the news of Pfizer's future business plans, this latest China news seems to be enough to make BioNTech investors nervous today.