Please ensure Javascript is enabled for purposes of website accessibility
Log In Help Join The Motley Fool
Free Article Join Over 1 Million Premium Members And Get More In-Depth Stock Guidance and Research
By Will Healy - Mar 24, 2021 at 9:07AM

A constant threat looms over the action-sports camera maker's stock.

GoPro (GPRO 2.76%) stock benefited significantly from the 2020 stock rally. Since falling into penny-stock status one year ago, the maker of compact cameras for extreme adventurers has rallied more than 410% over the last 12 months. Nonetheless, while GoPro could survive as a company, an eroding competitive advantage likely dooms this consumer discretionary stock.

The nature of GoPro's competitive advantage

GoPro manufactures action cameras, mobile apps, and video editing software. From a certain point of view, it looks like a high-growth business. Grand View Research forecasts a compound annual growth rate (CAGR) of 17% through 2025. To date, it has sold over 26 million action cameras.

These cameras offer high-resolution and time-lapse photography. They can also shoot photos and videos under extreme conditions, such as during rapid movement or underwater. 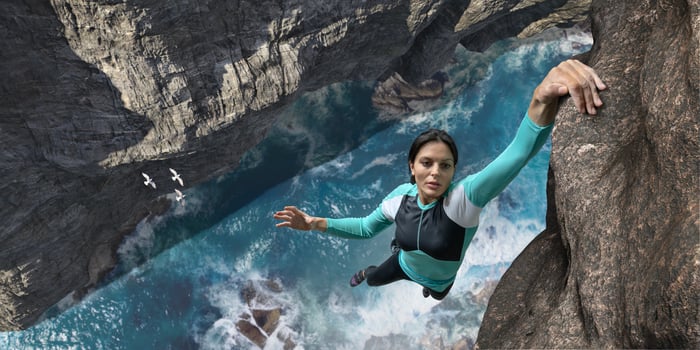 This provides an advantage over many smartphone cameras like the ones offered by Apple or Samsung. The GoPro Hero9 offers 14.7 MP frame grabs, the resolution at which it can capture individual still images from a video. This compares to the 12MP on Apple's latest release, the iPhone 12. The improved resolution gives GoPro a competitive advantage for professionals and enthusiasts who want to shoot photos or videos under such conditions.

Nonetheless, smartphones remain a competitive threat as their cameras continue to improve. In this sense, the company's positioning compares well to that of Garmin (GRMN 3.24%), which led the market in GPS units until smartphones co-opted that function. Like GoPro, Garmin switched to the specialty market. Like GoPro, it sells products designed for sports or outdoor recreation.

However, investors cannot forget that Apple and Samsung operate exponentially larger ecosystems than GoPro. Moreover, thanks to the Apple Watch, Apple now builds a product that can function under unstable conditions. While that does not bring Apple directly into GoPro's action camera business, the Apple Watch's durability means Apple can compete with some of the portable data-collection functions found on GoPro's newest devices.

The pandemic worsened the effect of GoPro's challenges, and the financials reflected that outcome. For 2020, overall revenue fell by 25% year over year, to $892 million. GAAP losses nearly quadrupled to about $67 million during the same period. This occurred as research and development (R&D) costs fell by less than 10%, and general and administrative expenses (G&A) rose by more than 2% from 2019 levels.

Management did not explain why these changes occurred. However, on the Q4 2020 earnings call, CFO Brian McGee said the company expects increased R&D spending and a reduction in G&A expenses in 2021.

Other financials offered a mixed picture. GoPro turned to debt during the pandemic, which rose by nearly $70 million to $218 million. However, receivables -- amounts that customers owe to the business -- fell by $93 million during 2020. At the same time, the company took its cash position from $150 million to $326 million in that period, probably to boost liquidity and bolster confidence in the company's finances during the contagion.

Between its cash position and its $89 million in free cash flow during 2020, GoPro easily covered its $20 million interest expense. Still, the fact that it ran an operating loss of $37 million in 2020 means that it must burn cash to survive. Also, with the company worth just $216 million after subtracting liabilities from assets, the liability of a $218 million long-term debt load constitutes a significant burden.

This financial position did not stop GoPro stock from benefiting from the 2020 stock rally. GoPro has risen from the $2-per-share range one year ago to about $13 per share today. Also, GoPro shares jumped in recent weeks due to attention from Reddit's WallStreetBets. However, such talk involves traders buying to cover short positions, rather than improvements related to GoPro's core business. This type of speculation tends to make a stock unpredictable instead of investable.

Even after this rally, GoPro remains cheap, trading for roughly 2.1 times sales. While that is a massive increase from the 0.3 price-to-sales (P/S) ratio it sported one year ago, it compares well to Garmin's 5.8 sales multiple and to the S&P 500 P/S ratio of about 2.9.

Should I buy GoPro?

Admittedly, the projected growth in the action camera market bodes well for GoPro stock. Also, its financials do not point to any immediate dangers.

Unfortunately, GoPro faces the constant danger that smartphones will co-opt an increasing number of its product features. Moreover, with Apple and Samsung producing more products that are better designed for extreme activities, GoPro's competitive advantage faces a constant threat. Despite the low sales multiple, this ongoing concern makes GoPro stock too dangerous to touch.