Please ensure Javascript is enabled for purposes of website accessibility
Log In Help Join The Motley Fool
Free Article Join Over 1 Million Premium Members And Get More In-Depth Stock Guidance and Research
By Reuben Gregg Brewer - Updated Mar 25, 2021 at 10:54AM

This net lease REIT proved its mettle during the pandemic -- is that enough to earn it a spot in your portfolio?

There are good dividend stocks and there are great dividend stocks. Sometimes the differences between the two are small, but they're crucial. So if you're an income investor wondering if STORE Capital (STOR 2.06%) can achieve long-term greatness, it's important to compare it to a pair of real estate investment trusts (REITs) that have clearly earned that status.

STORE Capital is a net lease real estate investment trust, which means it owns single-tenant properties for which the lessees are responsible for most of the property-level operating costs. It is generally considered a low-risk investment approach in the REIT arena. But it isn't the only company doing this, with industry giant Realty Income (O 1.88%) and longtime participant W.P. Carey (WPC 1.79%) both considered leading net lease businesses. 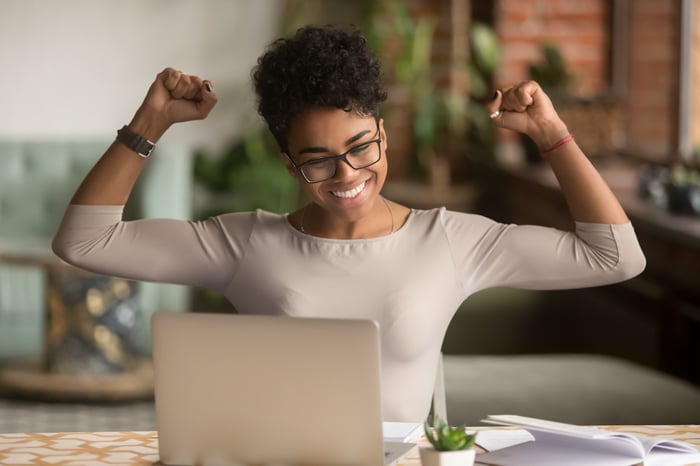 STORE Capital's portfolio of roughly 2,600 properties is less than half the size of Realty Income's nearly 6,600, but notably larger than W.P. Carey's nearly 1,250 buildings. The comparison between Realty Income and STORE is much cleaner, since they both focus more on retail assets.

W.P. Carey's portfolio is far more diversified and tilts toward industrial properties, so the smaller portfolio actually makes sense. Only 18% of W.P. Carey's portfolio is in the retail sector. Going by market capitalization, STORE weighs in at around $8.6 billion, with W.P. Carey at $12 billion, and Realty Income sitting on a huge $23.4 billion market cap. All in all, STORE is relatively small, which isn't shocking given that it is still a fairly young REIT.

Small isn't bad, per se, since it means growth can be easier to achieve. Indeed, a smaller number of acquisitions will have a bigger effect on the top and bottom lines than the same number at Realty Income would. And, frankly, STORE has enough scale at this point to compete with just about anyone, so size shouldn't be an impediment. That said, it is worth keeping the company's size in mind because it leads to other questions.

STORE was founded in 2011 and went public in 2014. That's not trivial -- the fact that it was effectively created after the deep 2007-2009 recession meant that, until 2020, it had grown its business only during good times.

When the coronavirus pandemic hit last year, there was simply no history to help investors determine how STORE's management might react. Meanwhile, with roughly 50 years of operating results under their belts, Realty Income and W.P. Carey were better-known commodities, given that they had both survived numerous downturns without skipping a beat (more on this in a second).

That said, STORE did just fine. Rent collocation rates fell dramatically in the early days of the pandemic, but they have since picked back up nicely. The REIT is currently collecting around 93% of what it is owed, around Realty Income's levels but a few percentage points below W.P. Carey.

So STORE has proven out its business model, at least once. That doesn't match up to Realty Income's or W.P. Carey's track records, but it does give at least some idea of what to expect during the next downturn.

Real estate investment trusts are specifically designed to pass income on to shareholders via dividends. Realty Income has 28 years of annual dividend increases under its belt, W.P. Carey is at 24 (one for every year it has been public), and STORE is at six. Given STORE's young age, that's not exactly a fair comparison.

However, there are two things here to think about. First, STORE's ability to get through 2020 was punctuated by the dividend increase it made in the third quarter of the year. The pandemic was clearly under way and the choice to hike the payout was a statement of strength. That said, Realty Income and W.P. Carey increased their dividends each quarter. You can read into that whatever you like, but it's pretty clear that the old hands here sailed through as usual.

In terms of cash payouts, W.P. Carey is at the top of this trio, offering investors a generous 6.1% dividend yield. Realty Income's yield is around 4.5% and STORE's is 4.4%. Once again, W.P. Carey's more industrial focus is at play, but it is interesting that STORE's yield is actually lower than that of Realty Income, given the similarities between their portfolios. The premium being afforded STORE is probably because its relatively smaller size will likely make growth easier to achieve. 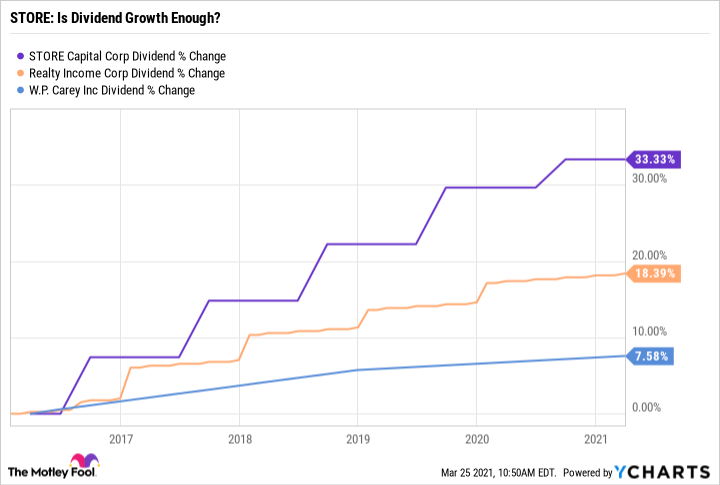 In fact, dividend growth is the one area in which STORE really differentiates itself. Since 2016, its dividend has increased a huge 33%, much more than either Realty Income or W.P. Carey. And that might lure in investors who favor dividend growth stocks.

When you pull back and look at STORE compared to some of the net lease industry's oldest and most respected players, it actually comes out looking pretty good. But good isn't great. STORE simply doesn't have the history yet to put it into the great category.

That, however, doesn't mean it would be a terrible investment, because for a dividend growth investor, STORE would probably be a better choice than Realty Income or W.P. Carey. You just have to go in knowing that it has only survived one stress test while continuing to reward investors with dividend hikes, unlike the other two net lease REITs here that have achieved that feat many times over in their long and successful histories.

Here's Why This REIT Is One of My Largest Investments

Here's Why I Never Plan to Sell This Dividend Stock

3 Stocks to Watch If the Market Crashes

Warren Buffett Loves This High-Yield Dividend Stock. Is it a Buy?