Please ensure Javascript is enabled for purposes of website accessibility
Log In Help Join The Motley Fool
Free Article Join Over 1 Million Premium Members And Get More In-Depth Stock Guidance and Research
By Reuben Gregg Brewer - Mar 25, 2021 at 11:51AM

The market giveth and the market taketh away, especially when it comes to volatile commodities like oil.

Shares of Centennial Resource Development (CDEV 5.27%) fell as much as 8% in early trading Thursday. The energy sector stock is fairly volatile, so a move like this isn't too shocking. However, the decline came just one day after the stock rose sharply in early trading, and the reasons for both moves are important to understand.

On Tuesday, a massive container ship got lodged, sideways, in the Suez Canal. Basically, nothing can get through this vital waterway until the ship is moved out of the way. By some estimates, around 12% of global trade flows through the canal, which connects the Red Sea (and thus, the Indian Ocean) to the Mediterranean Sea (and, thus, easy access to Europe). This is a very big deal. Investors were quick to note that the Middle East produces a lot of oil, and that a lot of the tankers that move it travel via that route.

As such, investors bid up the price of energy due to expectations of supply disruptions. Centennial Resource Development's stock went along for the ride. 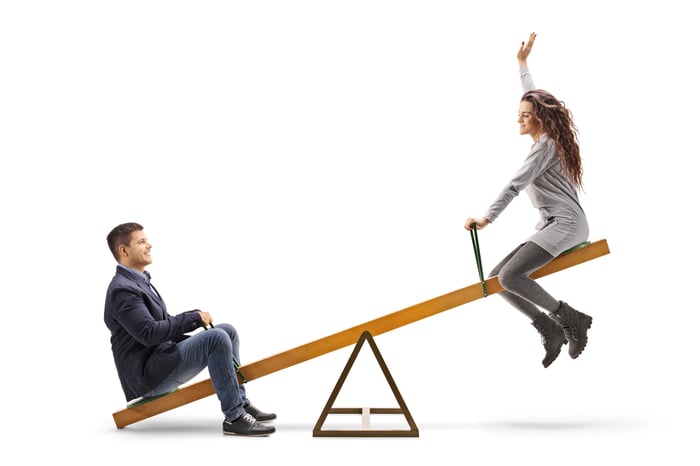 But that was Wednesday. By Thursday morning, Wall Street was taking a totally different view of things, with demand concerns becoming more prominent than the Suez Canal's blockage. Indeed, with coronavirus cases rising again in parts of Europe and the United States, governments in some areas are pulling back on their reopening plans or even implementing renewed restrictions. Not to mention that there is still excess oil supply around the world that should soften any impact from what is likely to be a temporary closure of the Suez Canal (though there is no clarity yet on when it might reopen).

So oil prices fell back and, once again, Centennial's stock went along for the ride.

The important story here is not about oil, the ship in the canal, nor even Centennial Resource Development's stock price. It's about investor psychology and how quickly sentiment can shift in a commodity market. Sometimes it feels like you are on the financial version of a playground seesaw. This week has been an excellent illustration of why most investors should avoid trying to market-time the short-term price moves in the highly volatile energy sector.