Please ensure Javascript is enabled for purposes of website accessibility
Log In Help Join The Motley Fool
Free Article Join Over 1 Million Premium Members And Get More In-Depth Stock Guidance and Research
By David Jagielski - Mar 25, 2021 at 10:00AM

Is it all just hype, or is this a biotech stock you should consider buying?

On Dec. 1, 2020, Ocugen (OCGN -1.79%) had a market cap of just over $55 million. It was a minnow in the biotech world that few investors would have been paying attention to. Today, it's worth more than $1.5 billion and has been soaring in popularity. The company is often found on the popular WallStreetBets Reddit forum.

What's gotten investors so excited about a company that makes next to no revenue? Below, I'll look at what's behind the company's soaring popularity and whether you should hop on the bandwagon. 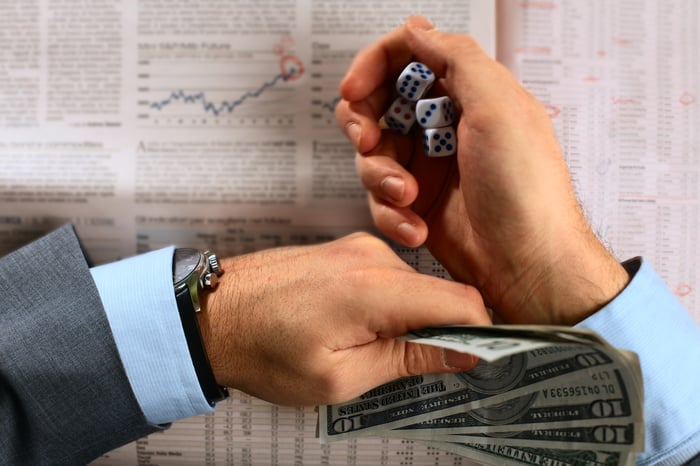 The company is codeveloping a COVID-19 vaccine

On Dec. 22, 2020, Ocugen announced that it would be working with Indian-based Bharat Biotech to develop Covaxin, a COVID-19 vaccine candidate, for the U.S. market. At the time, the drug was in the early stages of a 26,000-person phase 3 clinical trial. It was perfect timing because the news came not long after vaccines from Pfizer and Moderna received emergency use authorization (EUA) from the Food and Drug Administration (FDA). Vaccines were in the spotlight, and that triggered a surge in trading of the healthcare stock. 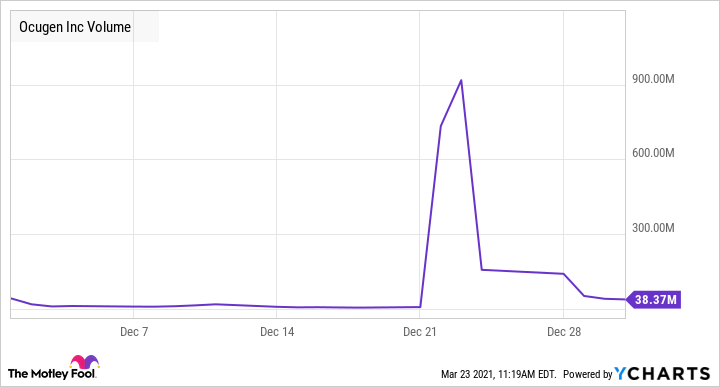 The stock is volatile, and while its 30-day average volume is currently around 70 million, there have been spikes where it soars in activity, and hundreds of millions of its shares change hands. And it all goes back to the vaccine.

The hype continued on Jan. 3 when India approved Bharat's vaccine for emergency use even though the trials were not yet complete. But with India only behind Brazil and the U.S. in the number of COVID-19 cases (it has close to 12 million as of right now), there's plenty of motivation to get vaccines out as quickly as possible.

For the stock, it meant another surge. On the first trading day of the year, Jan. 4, shares of Ocugen jumped 68%, and the trading volume was just shy of 170 million. (The previous trading day, it was less than 39 million.)

On March 3, the company released interim results from its clinical trials, which showed that the vaccine was 81% effective against COVID-19. What likely got investors even more bullish was news that it also showed "significant immunogenicity against the rapidly emerging variants."

The vaccine showed a higher rate of effectiveness than the COVID-19 vaccine from Johnson & Johnson, which has received an EUA and is just 66% effective (both Moderna and Pfizer have efficacy rates of more than 90%). And again, Ocugen's stock rose as much as 46% during the day, while a trading volume of 181 million soared to more than 10 times the previous day's levels.

In February, Bharat secured a deal to supply the Brazilian Health Ministry with 20 million doses of its vaccine, worth approximately $290 million. That averages out to a price of $14.50 per dose. If Bharat can produce 700 million doses of the vaccine by the end of the year, that could generate more than $10 billion in sales -- if it sells all of them at that average price.

But where those vaccines are sold is key, as under its partnership with Bharat, Ocugen would retain 45% of the profits from the U.S. market. Currently, Ocugen is trying to sell 100 million doses of the vaccine to the U.S. and will seek an EUA from the FDA in April.

Should you invest in Ocugen?

Shares of Ocugen are up an eye-popping 2,500% over the past year, eclipsing the S&P 500's gains of 71% during that period. The stock is a gamble, no doubt about it. The company's pipeline is light, with the highlight being OCU400, a gene-therapy product that treats multiple retinal diseases. It's only entering phase 1/2a trials this year.

That means it all comes down to the COVID-19 vaccine, at least for now. And while it did demonstrate positive results, it won't matter much for Ocugen until the FDA gives the vaccine the green light for the U.S. market. President Joe Biden says that by the end of May, there will already be enough vaccines in the country for all adults. The need for yet another vaccine may not be there, and investors shouldn't assume that a high rate of efficacy will guarantee millions of dollars worth of vaccine sales in the U.S.

With not much to look forward to beyond this vaccine, Ocugen isn't an investable company right now. Sales were just $43,000 in 2020, while the business incurred a loss of $21.8 million. Speculators are rolling the dice on the COVID-19 vaccine, and there's no guarantee that an EUA will come. There are better growth investments out there if you're looking to make a good return. Ocugen just isn't worth the risk.