Please ensure Javascript is enabled for purposes of website accessibility
Log In Help Join The Motley Fool
Free Article Join Over 1 Million Premium Members And Get More In-Depth Stock Guidance and Research
By Leo Sun - Mar 26, 2021 at 11:00AM

Which chipmaker is a better play on the semiconductor boom?

Skyworks, which generated over half of its revenue from Apple (NASDAQ: AAPL) last year, produces wireless and radio frequency chips for a wide range of markets. Intel is the world's largest manufacturer of x86 central processing units (CPUs) for PCs and data centers. 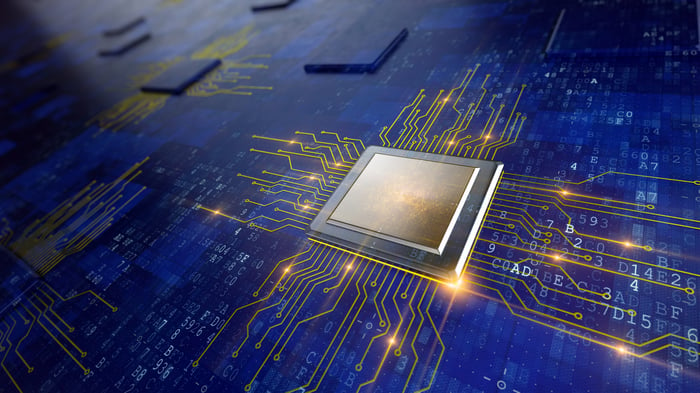 Skyworks' stock nearly doubled over the past 12 months as rising sales of 5G devices -- including Apple's iPhone 12 -- boosted demand for its chips. Intel's stock advanced less than 20% during the same period due to ongoing concerns about its R&D and manufacturing issues. But will Skyworks keep generating bigger returns than Intel throughout the rest of the year?

Intel grew its revenue at a much faster rate than Skyworks over the past three years.

Skyworks' revenue declined in 2019 as sales of smartphones decelerated worldwide. That slowdown, which was caused by the market's commoditization and longer upgrade cycles, was exacerbated by trade sanctions against its major customer Huawei.

Skyworks seemed poised for a recovery in 2020, but the pandemic disrupted its top-end markets in the first half of the year. It finally returned to growth in the fourth quarter as the disruptions ended and orders for its Sky5 5G chips accelerated.

Skyworks expects its content share gains in 5G devices, especially the new iPhone, and the recovering auto and industrial markets to boost its sales this year. Skyworks' revenue surged 69% year over year in the first quarter of 2021, and analysts expect its revenue to increase 47% for the full year. 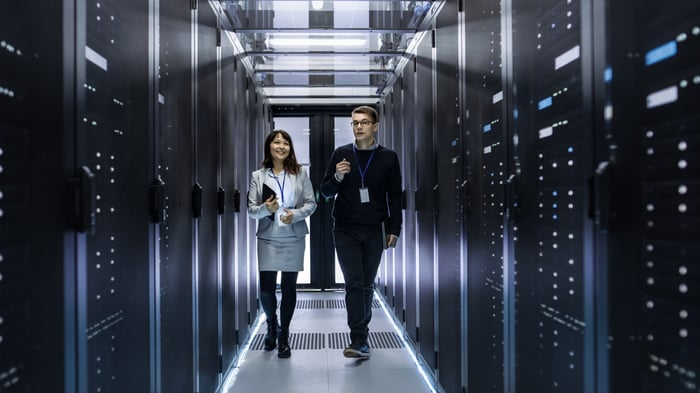 Intel's core PC and data center businesses initially seemed stable, but its sales of data center chips declined year over year in the second half of the year due to slower enterprise spending throughout the pandemic. The decline partly offset its stronger sales of PC CPUs for remote workers.

Intel's ongoing chip shortage, which was caused by R&D and manufacturing issues at its internal foundry, also resulted in market share losses to AMD (AMD 3.23%), which outsourced its chip production to Taiwan Semiconductor Manufacturing Company (TSMC) (TSM 1.17%) instead of manufacturing them internally.

Intel recently hired Pat Gelsinger, a veteran Intel engineer who previously led VMware (NYSE: VMW), as its new CEO to navigate the crisis. Intel is outsourcing some of its production to TSMC to stabilize its chip production, but it doesn't expect to launch its newest 7nm chips until 2023. As a result, analysts expect Intel's revenue to slide 7% this year.

The profits, dividends, and valuations

Skyworks' earnings tumbled with its revenues in 2019 and 2020. Meanwhile, Intel maintained fairly stable earnings growth partly due to its more aggressive use of buybacks to boost its earnings per share.

Skyworks' earnings doubled year over year in the first quarter thanks to surging orders of its 5G chips. Analysts expect its earnings to grow 67% this year. That's an incredible growth rate for a stock that trades at just 16 times forward earnings.

Wall Street expects Intel's earnings to decline 13% this year as it increases its capital expenditures (capex) to resolve its manufacturing issues and address the worsening chip shortages worldwide.

Gelsinger recently warned that it could take a "couple of years" to resolve those shortages since it can't resolve its internal issues overnight, and top foundries like TSMC are already overloaded with orders. That's why Intel's stock, which trades at just 13 times forward earnings, still doesn't seem particularly cheap.

Skyworks isn't struggling with any chip shortages because it manufactures its chips internally instead of relying on third-party foundries.

Skyworks pays a forward dividend yield of 1.1%, which is lower than Intel's forward yield of 2.2%. However, Skyworks' other strengths arguably offset its lower yield, which simply declined as its stock rallied over the past year.

Intel's low valuation and yield should limit its downside potential, but it could continue to struggle with chip shortages and market share losses for the foreseeable future.

Skyworks' revenue and earnings are rising; it isn't struggling with any production bottlenecks, and its stock remains cheap relative to its growth. Therefore, I believe Skyworks will continue to outperform Intel this year and remain one of the best all-around plays on the booming semiconductor sector.