Please ensure Javascript is enabled for purposes of website accessibility
Log In Help Join The Motley Fool
Free Article Join Over 1 Million Premium Members And Get More In-Depth Stock Guidance and Research
By Keith Speights - Mar 26, 2021 at 6:00AM

The company missed earnings expectations and hinted at slowing growth in 2021.

No one expected Co-Diagnostics (CODX 1.22%) to follow up its fantastic gain of nearly 940% in 2020 with anything close to that level this year. However, the molecular-diagnostics stock got off to a great start. The momentum is losing steam now, though.

Co-Diagnostics announced its fourth-quarter and full-year 2020 results after the market close on Thursday. The healthcare stock sank 8% in after-hours trading. Here are the highlights from the company's Q4 update. 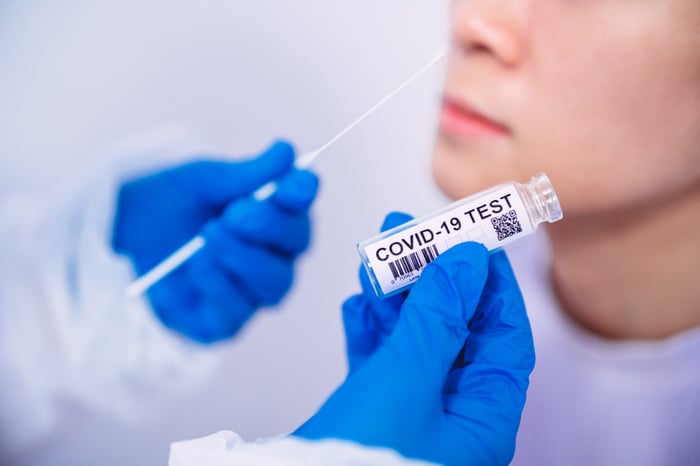 Co-Diagnostics reported revenue in the fourth quarter of $27.1 million, up 24% quarter over quarter. This result topped the average analyst revenue estimate of nearly $25 million.

One product generated most of Co-Diagnostics' revenue growth in Q4: The Logix Smart COVID-19 Test. The company received Emergency Use Authorization (EUA) for the test in April 2020. It's been a fun ride for Co-Diagnostics, for the most part, since then.

What will 2021 look like for Co-Diagnostics? CEO Dwight Egan tried to manage expectations saying that, "COVID-19 test sales may not be as robust as in 2020." However, the company thinks that demand will continue for its COVID-19 tests and other products over the long run.

The company hopes to win an additional EUA for its Logix Smart direct saliva test. It also could benefit if new coronavirus variants spread, boosting demand for COVID-19 testing.