Lucid Motors might have what it needs to beat the electric vehicle luxury leader at its own game.

Tesla (TSLA -5.88%) has achieved a significant first-mover advantage in electric vehicles -- but as the demand for EVs grows, so does competition. One EV rival that deserves closer analysis is Lucid Motors, currently planning to go public via a merger with the SPAC Churchill Capital IV (CCIV). Lucid's performance and price superiority over Tesla could reward early investors with multibagger returns over the next decade. 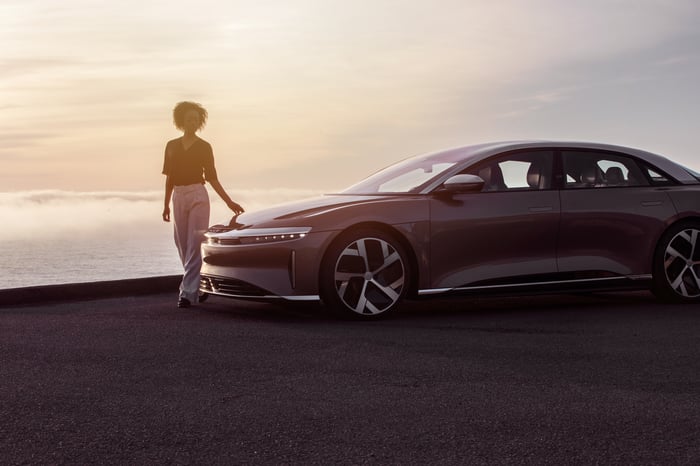 Head-to-head with the big dogs

Lucid Motors aims to redefine the luxury EV market, starting by directly competing with the Tesla Model S. And when you compare the newcomer with the current leader, Lucid's metrics are impressive. The table below shows the specs of the two cars.

As seen above, the Lucid Air wins in five out of the six categories; it drives farther, more efficiently, with faster charging. The technology driving that outperformance -- protected by 403 filed patents, 80% of which have already been granted -- could allow Lucid to gain market share on the lesser-performing Model S.

Lucid Motors seems to be mimicking Tesla's early phase deployment strategy by coming to market pre-production, with one model and a plan to expand. Lucid still has some ground to make up on production, compared to the 500,000 cars Tesla produced in 2020. Lucid Motors is expected to start production in Spring 2021, with a facility capable of eventually turning out 365,000 cars annually at full capacity.

In addition to its apparent performance and cost superiority, Lucid Motors currently has eight executives who used to work at Tesla. Most importantly, this includes CEO Peter Rawlinson, who was Vice President of Vehicle Engineering and Chief Engineer of the Model S during his time at Tesla, which ended in 2013. That provides advantageous insight into the other team's playbook and how it operates.

Comparing all of those numbers with the staggering market cap Tesla has accomplished, it would be reasonable to estimate that at an approximately $50 billion market cap, Lucid Motors has plenty of opportunity to claim some market share away from Tesla.

A bumpy journey with a luxury destination

These numbers paint an alluring picture, but there are some items to keep in mind. Lucid Motors maintains a high market valuation because it has yet to commercially produce any vehicles to date.

The CCIV SPAC dropped roughly 50% recently as part of a much larger technology stock pullback, with the Nasdaq as a whole dropping double digits. That sell-off likely brought the combined future company's valuation closer to reality. But even with the recent price reduction, Lucid Motors currently has no vehicle production revenue, which makes valuation difficult.

Aside from the vehicle pre-production, Lucid hasn't ruled out other potential growth markets, such as providing energy storage systems, or selling in-house technology for military, agricultural, and heavy machinery purposes. This offers a form of potential optionality in the stock to grow further in the EV market. There might be a limited market for EVs currently, but as environmental policy expands, so will potential market share with global implications.

Lucid Motors' valuation is based solely on potential, but it is worth a starter position if you can handle volatility. Lucid may never become the $635 billion company Tesla is, but that doesn't detract from its potential to be a market-beating multibagger. Even with stiff competition in an increasingly crowded market, Lucid has the opportunity to disrupt the future of EVs through a combination of both luxury and performance over the next decade for investors willing to go along for the ride.