Please ensure Javascript is enabled for purposes of website accessibility
Log In Help Join The Motley Fool
Free Article Join Over 1 Million Premium Members And Get More In-Depth Stock Guidance and Research
By Cory Renauer - Mar 27, 2021 at 6:57AM

It looks like the proprietary technology that led to the first COVID-19 vaccines isn't very difficult to replicate.

BioNTech (BNTX -5.34%) recently received a public break-up message from its favorite collaboration partner that reverberated with Moderna (MRNA -4.04%) and every other biotech with similar technology. Pfizer (PFE 1.00%) has decided it can make vaccines based on messenger-RNA (mRNA) for other diseases without help from BioNTech or anyone else.

While boasting to The Wall Street Journal about all the lessons learned during the company's first experience working with BioNTech, Pfizer's CEO Albert Bourla said, "We have our own expertise developed." Here's why these six words could spell out trouble for BioNTech, Moderna, and a slew of biotech start-ups developing similar drugs. 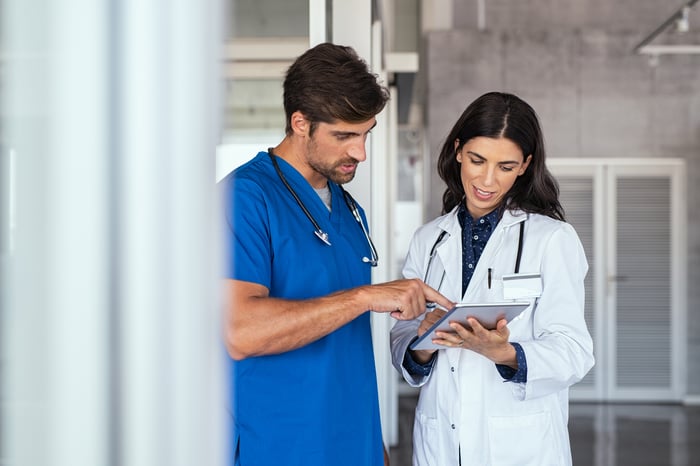 Using strands of mRNA to turn human cells into mini vaccine factories looks like a great way to protect against viruses, but this technology still has a lot of limitations. Until somebody makes a major breakthrough, mRNA-based drugs will remain limited to single-use applications. This is because viruses have been using RNA to hijack cellular machinery since life began, and our immune systems still go berserk when they encounter mRNA strands that are supposed to be therapeutic.

Outside of the vaccine arena, there aren't many applications mRNA can safely treat, and there are only so many scary pathogens people need protection from. That means Pfizer will end up butting heads with nearly every company that relies on mRNA technology.

Moderna's pipeline relies entirely on mRNA, so it will almost certainly encounter Pfizer's forthcoming mRNA platform. BioNTech's pipeline is geared heavily toward mRNA-based drugs, but not entirely. The company has two antibodies and one small-molecule drug in early-stage clinical trials as potential new cancer treatments.

Since the FDA has already started winding down from pandemic mode, it's unlikely we'll see Pfizer carry another vaccine candidate from concept to commercialization in less than a year. That said, we can probably count on Pfizer outrunning its less established peers like Moderna and BioNTech.

Pfizer is ready to lean into mRNA vaccine development with the same gusto it applied to the COVID-19 vaccine race. To get an occasional jump-start, Bourla said the company would start manufacturing some experimental products at risk before they have a chance to earn approval.

Races to approval aren't the only challenge Pfizer could throw in front of Moderna and BioNTech. Before the novel coronavirus ever reared its ugly head, Pfizer was already a champion vaccine marketer. The company's pneumonia-preventing vaccination for older adults, Prevnar-13, was the world's top-selling vaccine in 2019 with $5.8 billion in sales worldwide.

Pfizer's decision to work on new mRNA-based vaccines is bad news for just about every clinical-stage mRNA-focused company. If other big pharma companies follow Pfizer's lead and develop mRNA-based drugs in-house, clinical-stage biotechs relying on this technology are going to be in deep trouble.

It's impossible to overstate the role that collaboration plays in today's biopharmaceutical industry. Since each step along the drug development pathway is exponentially more expensive than the previous step, clinical-stage companies need deep-pocketed partners to accept some financial risk and lend an experienced hand.

If independent biotechs can jump through all the hoops necessary to earn approval for a new drug, they still need to hire a salesforce to run the commercial-stage gauntlet.

Pfizer's entry into the mRNA arena isn't a reason to dump your shares of BioNTech or Moderna, but you'll want to keep an eye on the big pharma's progress.

While Pfizer's entry into the mRNA arena is disastrous news for clinical-stage companies developing mRNA-based drugs, BioNTech and Moderna will get plenty of chances to expand their horizons. In 2021, Pfizer expects COVID-19 vaccine revenue to reach about $15 billion based on existing contracts. BioNTech is entitled to half the profits the vaccine generates.

This year Moderna expects $18.4 billion in COVID-19 vaccine sales. The amount expected to reach the company's bottom line this year isn't quite clear, but it will be enough to race forward with a potential new vaccine for cytomegalovirus (CMV) currently in late-stage clinical trials.