Please ensure Javascript is enabled for purposes of website accessibility
Log In Help Join The Motley Fool
Free Article Join Over 1 Million Premium Members And Get More In-Depth Stock Guidance and Research
By Zhiyuan Sun - Mar 28, 2021 at 6:12AM

Buying shares of dispensary chains isn't the only way to get rich off marijuana stocks.

By 2025, the U.S. marijuana market could be worth as much as $25 billion a year in terms of annual sales. That is a massive increase over the $19 billion market opportunity today, making marijuana one of the fastest-growing industries the nation has ever witnessed. As a result, many investors have turned their attention to marijuana stocks in anticipation of this Wild West-like opportunity.

When we think of marijuana stocks, we tend to think of growers, the companies that sell their pot directly to consumers or for business wholesale. But that's only a part of how the industry's money is made. In fact, three less straightforward cannabis companies -- Village Farms International (VFF -0.64%), GrowGeneration (GRWG 7.51%), and Innovative Industrial Properties (IIPR 2.37%) -- have all seen their stock prices rise between 186% and 1,330% over the past 12 months. Let's see how they can add weight to your portfolio. 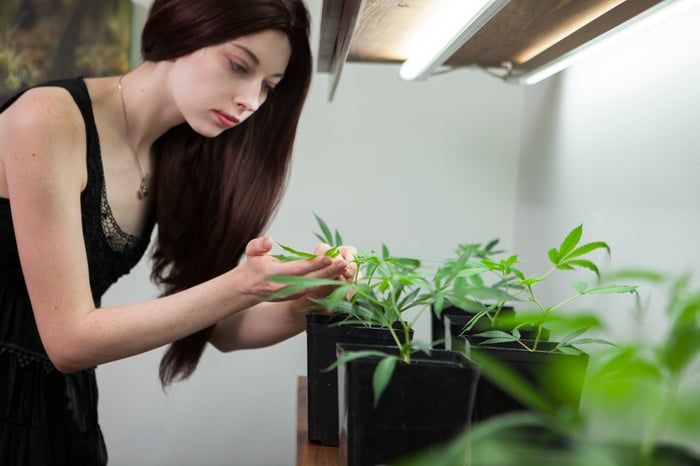 Through its subsidiary Pure Sunfarms, Village Farms International sells the No. 1 dried flower brand in Ontario, Canada's most populous province. Pure Sunfarms also launched its newly developed vapes, bottled oils, and gummies in the most recent quarter. It is a profitable business that generates north of $60 million per year in annual revenue.

Despite all this, though, Village Farms remains an agriculture business at its core. Specifically, it has three decades of operation growing tomatoes, cucumbers, and peppers in greenhouses. If that sounds boring, you'd be surprised at what a tasty business it is: Last year, the company's produce generated $157.3 million in sales and $11.5 million in net income. Both are respectable increases over the $145.6 million in revenue and $11.45 million in net loss it brought in during 2019 for the same segment.

The best part about Village Farms stock is that you can buy it for just 4 times forward revenue, a substantial discount over what its competitors are trading for. Hence, I'd highly recommend marijuana investors add this dynamic pot stock to their watchlists.

It's not just plants in pots; to grow marijuana on a large scale, producers need to purchase the proper tools, equipment, fertilizers, and lighting. That's where GrowGeneration comes into play. The company currently operates the largest chain of hydroponic centers in the U.S., with 39 locations across 11 states.

Because of so much demand from marijuana giants, it predicts its sales will skyrocket to $350 million this year. In comparison, the company only brought in $192 million in revenue in 2019.

GrowGeneration opened 14 locations last year alone and now sees as many as 152,000 unique visitors per month among all of its sites. Overall, paying 9 times revenue isn't that bad for a company projected to grow its sales by 82% this year. If you're interested in marijuana companies that can make money off the rising industry without even coming into contact with the plant itself, GrowGeneration is a great bet.

At 21 times revenue, Innovative Industrial stock is the most expensive on this list. However, it is also the company with the most unique business model. The company acts as a mega-pot landlord, purchasing dispensaries, cultivation plants, and production facilities from marijuana companies and then renting them right back to the seller, providing a much-needed cash infusion for companies that are thus happy to pay the rent. Its notable tenants include Green Thumb Industries (GTBIF -2.46%), Cresco Labs (CRLBF -2.35%), and Trulieve (TCNNF -1.01%).

Since its inception in 2016, the company has invested $1.42 billion in various properties. If we annualize its fourth-quarter 2020 revenue, the company is on track to generate $148.4 million in sales each year, representing a whopping increase over the $44.7 million in revenue it brought in during 2019.

Moreover, Innovative Industrial Properties has an astonishing 100% rent collection rate and a 0% vacancy rate, and its average lease length is approximately 17 years. Not only does Innovative Industrial have steady rent checks coming in, but it's also able to expand at an above-average growth rate due to the explosive state of the marijuana industry.

It managed to triple its profits last year from $22.1 million in 2019. In addition, the company is nearly debt-free and pays out a handsome dividend of 2.6% per year. For those looking for marijuana stocks that can provide steady income via dividends, Innovative Industrial is arguably the top -- perhaps only -- buy right now.