Please ensure Javascript is enabled for purposes of website accessibility
Log In Help Join The Motley Fool
Free Article Join Over 1 Million Premium Members And Get More In-Depth Stock Guidance and Research
By Robin Hartill, CFP® - Mar 29, 2021 at 11:04AM

Both ETFs have delivered eye-popping returns in the past decade. Which is the better buy in 2021?

Both funds performed well during that time span. But one of the most important rules of investing is that past results don't necessarily indicate future performance.

So which of these ETFs is the better buy in 2021? Let's dive right in and see if we can answer that question. 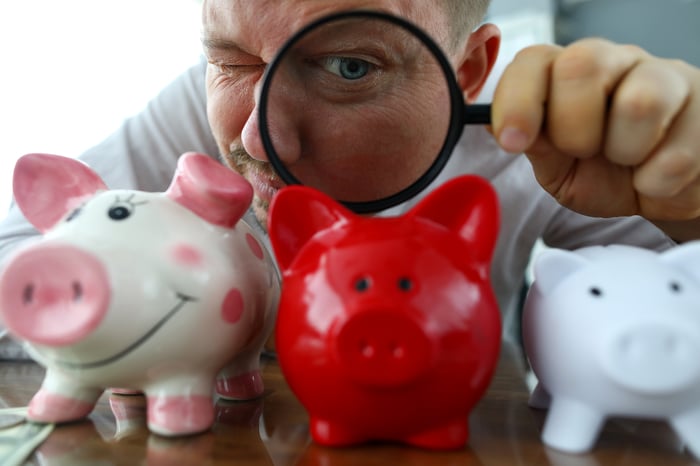 What is the QQQ ETF?

The QQQ tracks the Nasdaq 100, an index of the 100 largest non-financial stocks on the Nasdaq index. Like its benchmark index, the QQQ puts heavy emphasis on tech stocks, with 47.9% of its holdings in the information technology sector. Its next largest sector concentrations are communications (19.1%) and consumer discretionary (18.6%).

The fund's heavy tech weighting is the reason it's delivered those astounding 10-year returns of 506% as of March 25. Tech stocks have surged over the past decade. But they've been especially hot over the last year as the pandemic has driven rapid shifts to working from home and shopping online.

The fund's top five holdings are Apple, Microsoft, Amazon, Tesla, and Facebook. Those five stocks alone make up about 37% of its portfolio. The top 10 account for just over half of its allocation. The fund has an expense ratio of 0.2%, which is the percentage of the fund's assets used for administrative and other operating fees.

The QQQ still has the potential to deliver outstanding returns over time. But it's much more suited for investors with a high risk tolerance. Given that it's nearly 50% weighted in the tech sector and that 10 stocks account for more than half of the fund's investments, it's not exactly a diversified portfolio.

Also, tech stocks have been pulling back a bit, which isn't surprising given the stellar year they had in 2020. If you're buying the QQQ in hopes of replicating last year's performance, you'll probably be in for disappointment.

What is the VOO ETF?

The VOO is also an ETF, but its benchmark is the S&P 500 index. The index tracks the performance of 500 large-cap U.S. stocks, representing more than 80% of the U.S. stock market. The VOO's 0.03% expense ratio makes it one of the cheapest S&P 500 index funds available.

There's significant overlap between the largest holdings of the VOO and the QQQ. The VOO's five most heavily weighted stocks are Apple, Microsoft, Amazon, Facebook, and Google parent company Alphabet. These five stocks account for just under 20% of its portfolio; the top 10 make up about 26%.

When you invest in the VOO, you invest across all 11 stock market sectors. But tech stocks are still heavily represented on the S&P 500 and make up about 27% of the VOO's weighting, more than any other sector. The next-most represented sectors are healthcare (13.1%) and consumer discretionary (12.4%).

The VOO's returns over the past decade may pale compared to QQQ's, though it's less volatile. Still, the VOO would have tripled your money in the last 10 years, which is nothing to sneeze at. The truth is that the stock market, in general, has had an exceptional decade, and the past year has delivered unusually strong returns. So if you're thinking about investing in the VOO, keep in mind that performance could simmer in the near term. 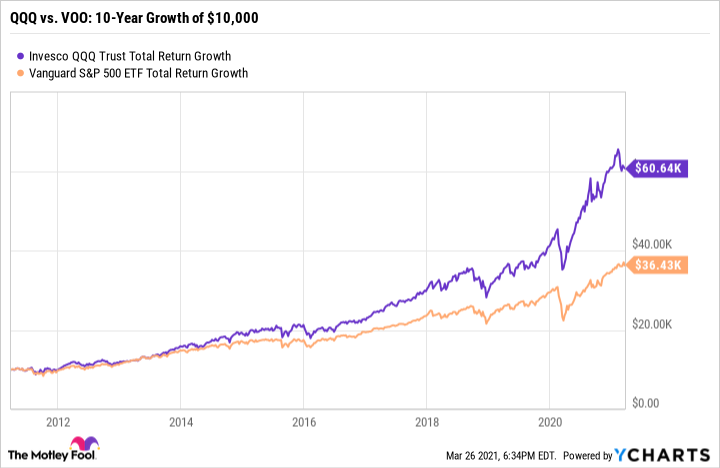 Which ETF is the better buy?

There's no hard-and-fast answer to determining whether one investment is better than the other. The answer usually depends a lot on your specific circumstances.

That said, the QQQ could be the better buy for you if:

The VOO is likely the better buy if:

3 Reasons to Consider the Invesco QQQ ETF for Your Portfolio, and 1 Reason Not to