These three companies have been on the rise even in a choppy market.

The crypto revolution has taken Wall Street by storm, and as you'd expect with cutting edge technology, many of the companies looking to innovate in the crypto space are among those you'll find within the Nasdaq Composite (^IXIC 1.19%). In particular, non-fungible tokens (NFTs) have become a red-hot item in recent weeks, with auctions of artwork tied to NFTs bringing in tens of millions of dollars.

Investors always want to find ways to take advantage of big trends, and while investing directly in NFTs is always an option, another way is to find the companies that are helping to make the NFT craze a reality. One Nasdaq stock, Hall of Fame Resort & Entertainment (HOFV -1.52%), is getting a huge boost on Monday even as the Nasdaq Composite itself was down, and it's in position to keep doing well as long as demand for NFTs remains high. Meanwhile, two other stocks -- Funko (FNKO 0.08%) and Jiayin Group (JFIN -0.84%) -- took a pause on Monday, but some hope that they'll also be able to make a big splash in the NFT world in time.

A Hall of Fame performance

Shares of Hall of Fame Resort & Entertainment moved higher by 17%. The company's recent partnership with Dolphin Entertainment to produce football-themed NFTs got noticed again as Wall Street analysts had favorable views of the partnership.

In particular, analysts at Maxim talked up the deal in boosting its price target on Dolphin's stock. Maxim sees the partnership and strategic move into NFTs as being potentially transformative for Dolphin, but investors could say many of the same things about Hall of Fame's business. As the enterprise associated with the Pro Football Hall of Fame in Ohio, Hall of Fame Resort & Entertainment sales have been minimal at best, and losses have been extensive. 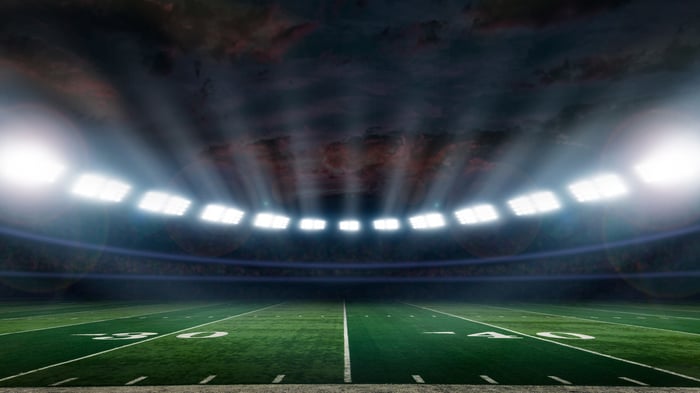 What's unclear is just how valuable NFTs produced using Hall of Fame's content will be. The National Football League (NFL) maintains extensive property rights over its content, and many expect the NFL to make its own deals for NFT production if the market proves itself. That could pose a long-term threat to Hall of Fame's prospects even if it's successful in generating interest among football fans. Nevertheless, the company is seeing a lot of upside Monday, and there could be more ahead depending on how the deal pans out.

Other avenues to NFTs

Hall of Fame certainly isn't the only way to play the NFT trend. Other companies are looking to do much the same thing with their own businesses.

For instance, Funko has a long history of making collectible toys, including action figures, plush dolls, and other pop culture products. By tying limited-run toys to NFTs, Funko hopes to cash in on both trends and find a new audience for its product lines. Its stock remained close to flat on Monday.

However, speculation about possible future NFT involvement is creating volatility in other stocks. For instance, Jiayin fell 6% Monday as investors didn't see the follow-through they'd hoped for regarding suggestions that the Chinese fintech company could start moving into non-fungible tokens.

As with any other hot trend, there's a lot of uncertainty in the NFT space right now. Rumors are flying, and not all of them will pan out. Moreover, the NFT field itself is only getting started, and a flood of supply could crush the market before it really gets off the ground.

Investors should nevertheless be aware of stocks looking to get into the NFT industry. As long as crypto remains popular, non-fungible tokens will likely be one angle that traders seek to play in search of profits.