Please ensure Javascript is enabled for purposes of website accessibility
Log In Help Join The Motley Fool
Free Article Join Over 1 Million Premium Members And Get More In-Depth Stock Guidance and Research
By Rachel Warren - Mar 29, 2021 at 6:41AM

No need to worry about the fallout of another market downturn with these two eggs in your basket of stocks.

Whether or not a market downturn is afoot is anyone's guess, but the increased volatility of recent months has investors speculating that another correction or crash could be imminent. As a long-term investor, it's more important than ever to stay focused on your investment strategy, shut out the voices of panic, and effectively manage the level of risk in your portfolio to ensure you're prepared for whatever direction the market moves.

If you want to better fortify your basket of stocks for another market crash, here are two bulletproof value stocks that can add greater equilibrium to your portfolio and generate consistent growth over the coming decades. 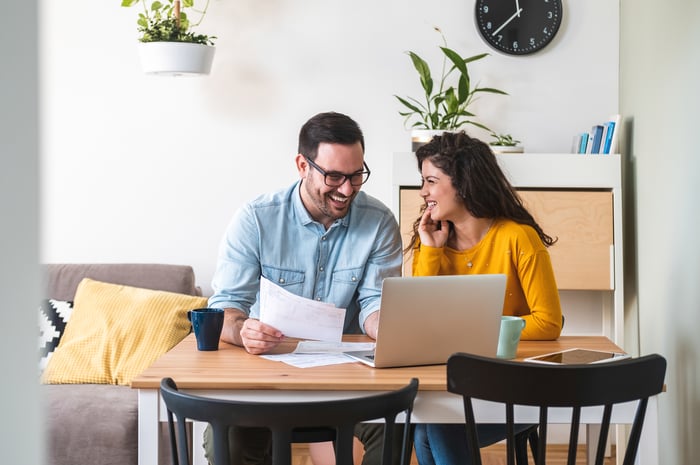 Johnson & Johnson (JNJ 1.75%) is one of the top blue-chip value stocks for investors to buy in today's market climate for a few different reasons. The company has been in business for nearly 140 years and is a leading developer of a broad range of consumer products, medical devices, and pharmaceutical drugs and therapies.

The company's impressive range of products also continues to fuel consistent balance-sheet growth. Despite the economic hardships of last year, Johnson & Johnson reported 1.2% sales growth on an operational basis, propelled by 8% year-over-year sales growth in the final three months of 2020.

The company's consumer health and pharmaceutical segments also saw respective sales increases of 3.1% and 8.4% during the 12-month period, which helped to offset a nearly 11% decline in medical devices sales due to delayed surgical procedures last year.

Another reason Johnson & Johnson has drawn increased investor interest lately is its COVID-19 vaccine, produced by the company's Belgian subsidiary Janssen Pharmaceutical Companies. The U.S. Food and Drug Administration authorized the single-shot vaccine for emergency use on Feb. 27.

This milestone event occurred after Johnson & Johnson announced on Jan. 29 that phase 3 trial data showed the vaccine demonstrated 85% efficacy in protecting patients from severe illness with COVID-19, and provided 100% protection against hospitalization and death 28 days following immunization. The vaccine was also authorized for emergency use in Canada on March 5, while the European Commission granted the vaccine a conditional marketing authorization on March 11.

Johnson & Johnson is currently working toward its goal of distributing 100 million doses to the U.S. by the middle of this year. The company has stated that it will not be making a profit from the doses distributed under the emergency use authorization, but that doesn't mean Johnson & Johnson won't see any financial benefit from its vaccine over the long term.

At the moment, the company's vaccine isn't a reason to jump on buying this stock. On the flip side, Johnson & Johnson's compelling dividend, solid financials, strong track record of growth, diverse and profitable product lineup, and impressive foothold in the healthcare industry are all excellent reasons to snatch up shares.

Tech giant Microsoft (MSFT -0.23%) is an oldie but a goodie in the world of value stocks. While the company pays a relatively modest dividend that yields just under 1% at the time of this writing, it does have a reliable history of raising its dividend. Last September, for example, the company announced a 10% quarterly dividend increase.

However, it's Microsoft's exceptional pattern of growth and resilience in all market conditions that should really get investors excited. In the company's fiscal 2020 (ended June 30), revenues and operating income grew by respective rates of 14% and 23%, while net income was up 13% on a year-over-year basis.

And during the first and second quarters of Microsoft's fiscal 2021 (ended Sept. 30 and Dec. 31), it reported top-line growth of 12% and 17%, respectively. Microsoft's bottom line also saw remarkable growth of 30% and 33% during these quarters.

Microsoft's flourishing cloud business is a key part of its ongoing growth story. The company's commercial cloud revenue grew 34% in the second quarter alone, swelling to nearly $17 billion. Microsoft is also achieving strong growth in other business areas, such as its Productivity and Business Processes segment, which saw 13% in second-quarter revenue growth.

Microsoft is in a solid position in terms of its cash-to-debt ratio, another key indicator of balance sheet strength. The company holds roughly $132 billion in total cash, cash equivalents, and short-term investments as opposed to about $67.5 billion in current liabilities due within the next year. With plenty of cash to cover near-term debt and its dividend, investors can rest assured that the tech stalwart's continued growth won't overshadow its ability to satisfy its obligations to both investors and creditors.

The mega-cap company currently trades at a reasonable valuation of about 35 times trailing earnings, and its price has remained steadily on the upswing over the past year despite the market's volatility. Investors searching for a recession-resistant tech stock with an unbeatable combination of growth and value should look no further than Microsoft.