Please ensure Javascript is enabled for purposes of website accessibility
Log In Help Join The Motley Fool
Free Article Join Over 1 Million Premium Members And Get More In-Depth Stock Guidance and Research
By Leo Sun - Mar 29, 2021 at 7:30AM

The market leader in creating "digital twins" of real-world spaces could generate explosive growth after it goes public.

Matterport, a developer of 3D spatial mapping tools, agreed to go public through a merger with Gores Holdings VI (GHVI), a special purpose acquisition company (or SPAC), in February. Gores stock initially jumped after the announcement but subsequently surrendered most of its gains as rising bond yields sparked a sell-off in growth stocks and more speculative investments like SPACs.

Gores expects to close the deal later this year, and the combined entity will take on the Matterport name, trading on the NASDAQ under the ticker symbol "MTTR". This represents a fascinating growth opportunity in the 3D-mapping space. Let's see what Matterport does, how fast it's growing, and whether or not its stock can generate big returns over the next five years. 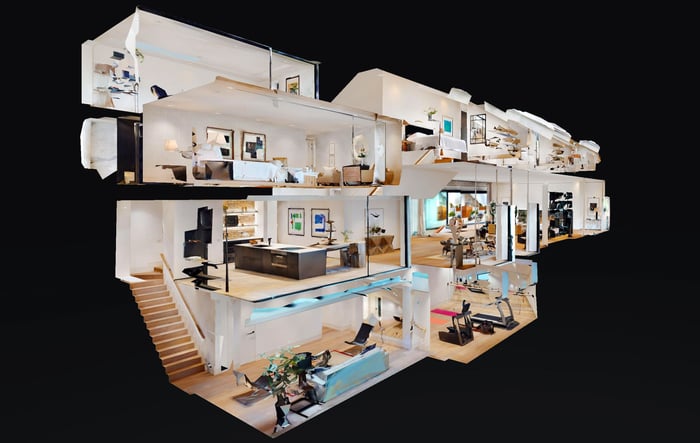 A first-mover's advantage in a disruptive space

This new app, which eliminates the need for high-end professional cameras, has plenty of potential applications. Realtors can offer more immersive virtual tours, retailers can create virtual shopping experiences, insurers can ask their customers to remotely document their losses in 3D to process claims faster, and AR and VR app developers can quickly create "digital twins" of real-world environments.

Its total revenue, which mainly comes from cloud-based subscriptions for hosting its clients' virtual tours on its own servers, surged 87% to an estimated $86 million last year. It attributed some of that acceleration to the pandemic, which caused more home buyers to take virtual tours of properties.

Where will Matterport be in five years?

Matterport will debut with a pro forma enterprise value of $2.3 billion, which would value it at about 27 times last year's sales. That valuation puts it in the same league as some of the market's hottest growth stocks, but Matterport's outlook might justify that premium valuation. 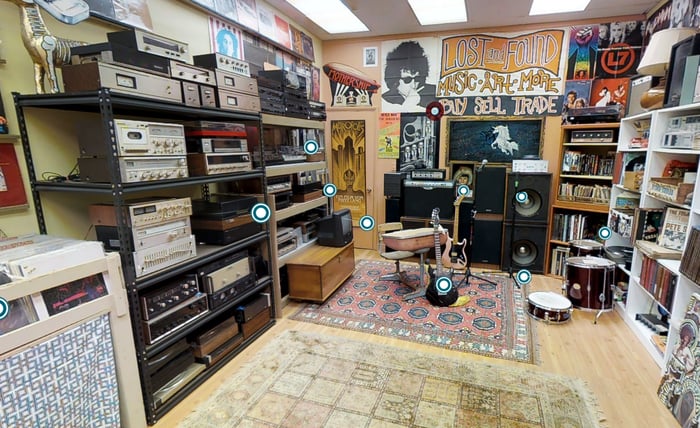 Its number of managed spaces rose from 1.4 million in 2018 to 2.3 million in 2019 before jumping to 4.4 million in 2020. Matterport claims there are about four billion buildings with 20 billion spaces worldwide, and they represent a total addressable market of more than $240 billion.

At an average monthly rate of $1 per space per month, Matterport could generate billions of dollars in annual revenue by capturing just a sliver of the market.  Based on that opportunity, the company believes its market cap could surpass $100 billion long term.

During its latest investor day, Matterport offered an impressive projection for $747 million of annual revenue by 2025, which would represent a whopping compound annual growth rate (CAGR) of 59% between 2019 and 2025. It also believes its gross margin can expand from 48% to 73% in that same period.

Those are bold claims, but Matterport enjoys a first-mover's advantage in its space, and its high net retention rate (112% in the fourth quarter of 2020) indicates its customers are loyal to its platform.

Matterport's growth potential is exciting, but investors should be aware of the long-term threats as well. Matterport's service is pricier and more complicated than those of other platforms, such as Zillow's 3D Home Tour and Cupix 3D Tour.

It could face even more competition over the next five years as 3D-sensing cameras and LiDAR scanners become standard in most phones. Its cloud service, which requires clients to host their tours on its servers, could also be disrupted by competitors if they offer free hosting.

Will Matterport be worth buying?

Matterport's growth rates are impressive, its subscriptions are sticky, and demand for its services will likely rise as it becomes more common to scan physical spaces or mix them with VR or AR environments.

However, the stock will also debut with a frothy price-to-sales ratio, and it could be bludgeoned by high bond yields as the rotation from growth to value continues. It could also face tougher year-over-year comparisons going forward after the pandemic passes.

Therefore, Matterport might be worth nibbling on, but I'd like to see how it fares in its first few quarters in a post-pandemic world before calling it a viable long-term investment.