Please ensure Javascript is enabled for purposes of website accessibility
Log In Help Join The Motley Fool
Free Article Join Over 1 Million Premium Members And Get More In-Depth Stock Guidance and Research
By Will Healy - Mar 30, 2021 at 11:41AM

In many respects, Square has only begun to tap its potential.

Traders may hesitate to think of Square (SQ -4.25%) as a company "just getting started." Its market cap takes the company deep into large-cap territory, and its valuation has made it far more expensive than fintech companies such as PayPal or Visa. Nonetheless, three factors strongly indicate that the Square growth story may have just begun in three critical respects. 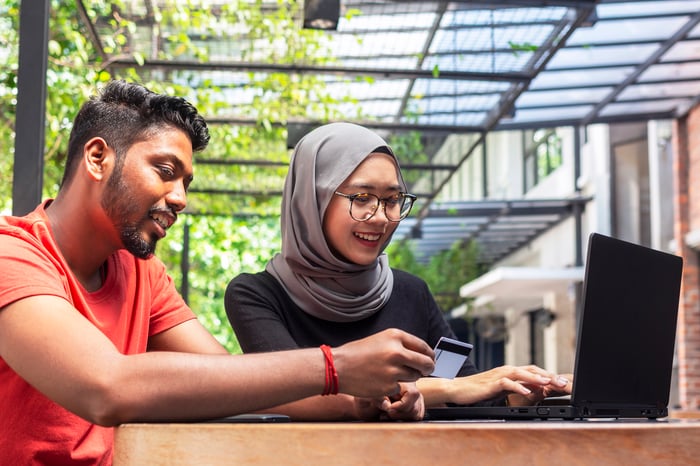 Square only provides its payment systems and services in a comparatively limited area for now. Other prominent fintech stocks like PayPal and Visa serve over 200 countries.

In comparison, Square only operates in Australia, Canada, Japan, the U.K., and the U.S. This leaves large swaths of the developed world unserved by Square.

The most notable market where Square does not offer its services is the European Union. However, its purchase of Spain-based Verse in 2020, which for now continues to operate as an independent business, indicates that could soon change. Going into countries that use the euro would instantly add 19 counties to its footprint, not including overseas territories and principalities that have adopted that currency. This also does not include places like Switzerland, Singapore, or the massive markets it could eventually serve in the developing world.

Some critics may charge that its footprint makes it a developed world company, unable to adapt to developing nations. Indeed, such challenges spawned companies like MercadoLibre's MercadoPago and StoneCo, which came about to address such challenges. However, Square has added functionality since its inception, and could add features to address cash customers should it enter developing nations.

Many might wonder what Square's banking charter means for investors. For now, probably little; the company said that the Square Bank would not have a material impact on the 2021 numbers.

Nonetheless, since it now operates a bank, Square stock could gain as the company begins to carry out functions associated with traditional finance. The bank allows Square to make loans without involving a third party, for example. Such a move fosters a competitive advantage by combining banking with a fully developed fintech ecosystem (more on that in the next section). This may also help its Cash App, its peer-to-peer payments platform, in unexpected ways.

Square has recently faced complaints about money disappearing from Cash App. Security firms such as Chargeback Gurus point out that users cannot reverse Cash App transactions, and that fraud rates rise by three to four times when an individual cash transfer does not require authentication or the verification of one's identity. Stories have also circulated in the media highlighting such fraud.

However, neither states nor the federal government license fintechs as they do banks. With Square becoming a bank, it will face more direct regulatory scrutiny. This could bring more direct oversight to Cash App at a time when it appears to need such rules.

Square prides itself on building "easy tools to empower and enrich people." The company began by providing the Square Reader, an add-on that made credit card transactions possible for consumers and sole proprietors through a smartphone.

At first, this made Square comparable to the finance industry of the past, where different companies performed separate functions such as banking, brokerage, payroll, credit card transactions, and technology. However, over time, it continued to add additional services through Square Payroll and Square Register.

Much of the added functionality also comes through Cash App. In addition to the basic collection and spending functions, Cash App also allows for stock trading and the purchase of Bitcoin.

Linking these functions increasingly makes Square a one-stop-shop for finance. If consumers adopt Square, this would allow for traditional checking, brokerage, and loan functions through its Bank and Cash App. For those starting a business, Square could provide loans as well as the needed card readers, cash registers, financial software, and payroll needs.

This reduces the need for payroll companies such as ADP -- and also for traditional banks. Although Square would likely not "take over finance," such a perception would probably bolster the reputation of Square stock.

Square supports a $95 billion market cap. Also, a P/E ratio above 525 looks pricey compared to PayPal's 65 earnings multiple and Visa's P/E of around 45.

Nonetheless, Square will probably move into more countries and perform more traditional banking functions over time. The expansion into new markets and the tie of traditional finance could make Square an all-in-one finance conglomerate. Given this potential, investors should consider getting into this fintech stock before the real expansion begins.