Even after the company lost billions last year, management pocketed millions in bonuses.

Executive bonuses are generally tied to performance. For example, a CEO may be paid according to the company hitting certain profit targets, or awarded stock options that can be exercised if the stock rises to a certain price.

So it was a bit odd when AMC Entertainment's (AMC 5.45%) board awarded $8.3 million in executive bonuses a month ago, following a year that can only be described as catastrophic. Due to the impact of the COVID-19 pandemic, revenue at the world's largest movie theater operator plunged 77.3% to $1.24 billion in 2020, and the company finished the year with a net loss of $4.6 billion. On a free cash flow basis, it lost $1.3 billion.

Management did succeed in staving off bankruptcy, but it didn't do so without diluting investors by a factor of more than four, growing shares outstanding from 104 million at the end of 2019 to 450 million as of March 3 of this year. Additionally, the company's debt burden rose from $4.7 billion to $5.7 billion, with the new debt carrying interest rates as high as 15%.

In a proxy statement filed in early March, AMC's board of directors explained its justification for the bonuses, saying they were in recognition of "extraordinary actions" that management took "to secure the company's survival and preserve stockholder value." The board also argued that the bonuses helped to "retain management and key employees to enable the company to emerge from the impact of the COVID-19 pandemic."

Was it the right decision?

While management deserves credit for staving off bankruptcy, diluting shareholders by another $17.5 million at a time when the company is desperate to preserve cash seems like a slap in the face to shareholders and shows that management's interests aren't really aligned with shareholders.

It's true that the stock has done well recently, but that's more due to dumb luck, as AMC has become one the meme stocks propelled by traders on Reddit boards like WallStreetBets. There's little connection between the business' fundamentals and the machinations of traders on such platforms who regularly send the stock up and down by double digits on no news.

It's also worth remembering that AMC management's pre-pandemic performance wasn't exactly stellar. The chart below shows how the entertainment stock did in the five years leading up to the pandemic. 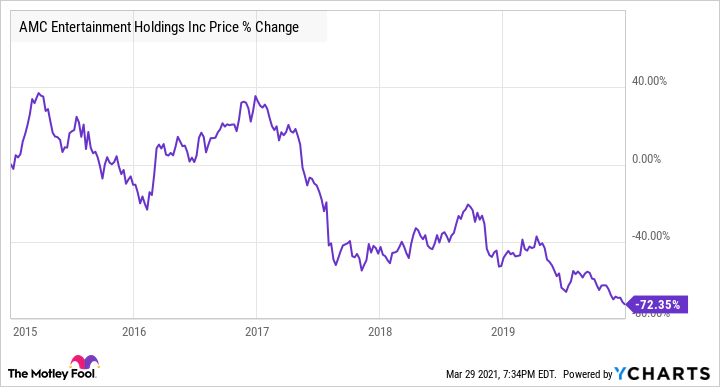 In early 2020, before the pandemic had become a reality, the company was also forced to make an 85% cut to its dividend, which had previously paid a double-digit yield.

In other words, Aron's track record is far from sterling, yet he's been compensated as if he's been the movie theater operator's savior. In addition to the special incentive bonuses, Aron was awarded $14.8 million in stock and paid $1.2 million in salary last year, meaning he was effectively paid $21 million last year with the special bonuses, which is money the company could have used to invest in sprucing up theaters after months of closures.

AMC's business will certainly be in a better position once the pandemic ends, but shareholders face exorbitant dilution and a crushing debt burden. Ultimately, whether the company can survive over the long term won't be determined by Aron's compensation package. But awarding generous bonuses at a time when the company is cutting nearly every other line item doesn't speak well of AMC's corporate governance, and that's one more reason to avoid the stock.

AMC Entertainment Lights Up With a Marquee Performance