Please ensure Javascript is enabled for purposes of website accessibility
Log In Help Join The Motley Fool
Free Article Join Over 1 Million Premium Members And Get More In-Depth Stock Guidance and Research
By Sushree Mohanty - Mar 31, 2021 at 6:42AM

These cannabis stocks are performing well in their home states' markets.

The evolving marijuana industry offers investors huge room for growth. The U.S. legal cannabis market, in particular, is set to boom. It could grow at a compound annual growth rate (CAGR) of 21% to be worth $41 billion by 2025, according to a report from New Frontier Data.

Two among a growing field of pot stocks are my favorite -- Illinois-based Green Thumb Industries (GTBIF -3.88%) and Florida-based Trulieve Cannabis (TCNNF -2.23%). Both companies are profitable -- a rare trait among marijuana companies. And both their stocks have soared over the past 12 months. Green Thumb's stock has gained 308% while Trulieve has surged 387%, outpacing the industry benchmark, the Horizons Marijuana Life Sciences ETF's gain of 80%. As state-by-state legalization ramps up in the U.S., these two stocks are in an excellent position to thrive -- and maybe even double your money. 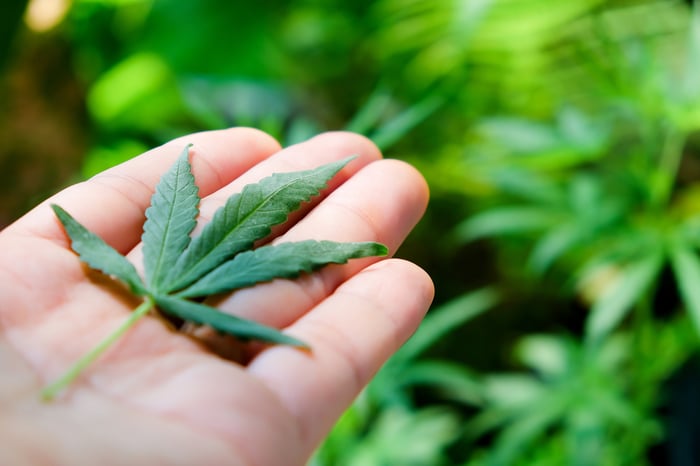 There is no stopping Green Thumb Industries' growth

The revenue jump also contributed to another quarter of positive earnings before interest, tax, depreciation, and amortization (EBITDA), which came in at $61.3 million, compared to $7.8 million in the year-ago period. EBITDA is an essential measure of operating performance to determine how well the company is handling its expenses. That metric was higher thanks to the dip in total selling, general, and administrative (SG&A) expenses, which came in at 30% of revenue versus 62% in Q4 2019. All these factors led to the company reporting a net income of $22.5 million, or $0.11 per share, based on generally accepted accounting principles (GAAP).

Green Thumb made moves to expand amid a pandemic, while many other companies were struggling to survive. This allowed it to grow its revenue triple-fold, while selling in 51 retail stores across 10 states. The company has solid expansion plans for 2021 in place too.

Its wise decision of directing resources toward its home state, Illinois, has led to fruitful results. Green Thumb's management is highly optimistic that the Illinois market will grow even stronger this year. I can see it happening too -- the demand Green Thumb needs might already be there. In just the first two months of 2021, the state has generated $170 million in cannabis sales.

Dominating the medical cannabis market in Florida certainly gives Trulieve an advantage when the opportunity arises to take over the recreational market -- if the state legalizes it, of course. At the end of 2020, the company had a 49% market share in cannabis oil and a 53% market share in cannabis flower in the state. Florida came closer to legalizing adult-use marijuana after lawmakers filed a bill in January to proceed with recreational cannabis legislation.

Trulieve's total revenue for the fourth quarter (ended Dec. 31, 2020) jumped 111% year over year to $168.4 million. That top-line growth brought in another quarter of positive adjusted EBITDA that rang in at $78.2 million, compared to $44 million in the year-ago period.

For 2021, Trulieve expects full-year revenue to come in the range of $815 million to $850 million, which could amount to a 63% jump. The company also expects adjusted EBITDA to come in around $355 million to $375 million. Considering Trulieve's progress in 2020, these numbers seem achievable.

Trulieve's high dependence on medical cannabis was once a worry. But without delay, it stepped into the burgeoning cannabis derivatives market to take advantage of these high-margin products. Cannabis derivatives are additional recreational products that include vape, edibles, concentrates, and more. In its third quarter ended Sept. 30, 2020, Trulieve launched a wide variety of edibles for its medical cannabis patients. The list includes cannabis-infused chocolates, gels, cookies, and brownies. Green Thumb already earns two thirds of its revenue from derivatives products like these.

Both companies have the potential to become the top cannabis player in the U.S.

Staying true to their home states has proven beneficial for both companies. Both are in a solid financial position to grow with the evolving industry. Trulieve ended its fourth quarter with cash and cash equivalents of $147 million and outstanding debt of around $820,000. Meanwhile, Green Thumb had cash and cash equivalents of $83.8 million and total debt of $99.1 million, out of which the company needs to clear $342,000 within 12 months.

Green Thumb's management is also hopeful about the recreational cannabis markets in New York, Connecticut, New Jersey, and Pennsylvania, once legalized. At the end of the quarter, the company had 51 retail stores in 10 states, and held licenses for 96 retail locations. 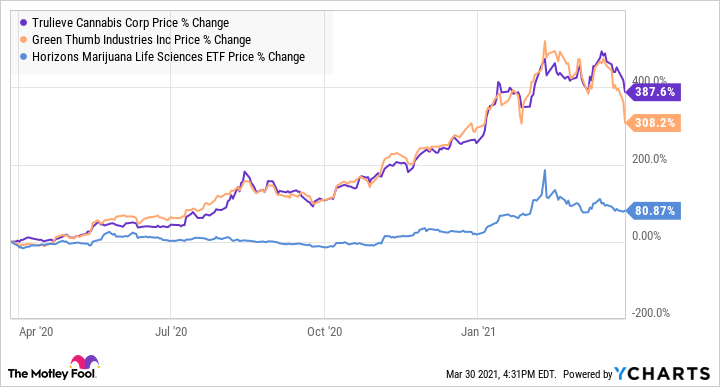