Please ensure Javascript is enabled for purposes of website accessibility
Log In Help Join The Motley Fool
Free Article Join Over 1 Million Premium Members And Get More In-Depth Stock Guidance and Research
By Adria Cimino - Mar 31, 2021 at 6:00AM

Sales are booming -- and that's likely to continue in the long term.

Often, when we think "Robinhood stocks," we think of risky names. Many users of the online trading platform look for stocks that can deliver quick, dramatic returns. This usually comes with a good deal of risk.

But some Robinhood investors also are opting for great long-term buys. I had a look at the 100 most popular stocks on the platform and found three of my favorites. And today just so happens to be a good time to buy them. I'm talking about an online retail giant that flourished last year, a biotech company selling a much-needed product, and a retailer you'll identify with basketball great Michael Jordan. 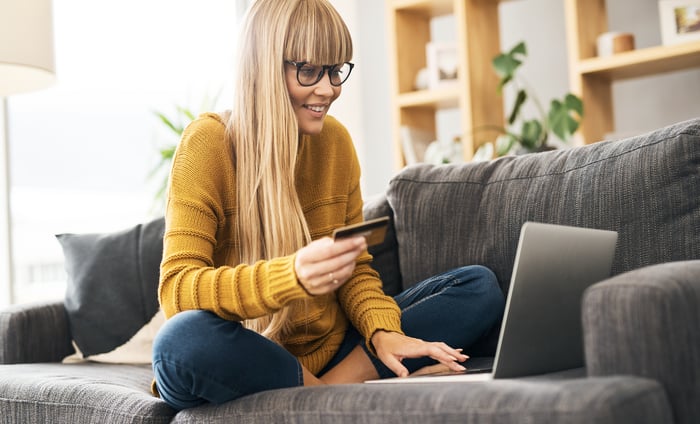 Looking ahead to the first-quarter earnings report, there's reason to be optimistic. Amazon predicts a 33% to 40% increase in sales year over year. I'm confident growth will continue well beyond that too. Online shopping already was growing prior to the pandemic. And analysts predict consumers won't abandon their online shopping habits. AWS is another bright spot. The company maintains its No. 1 position in the worldwide cloud market, with more than 30% share, according to Synergy Research Group. AWS accounts for 59% of Amazon's annual operating income.

Amazon shares are down about 8% over the past two months. And they're trading at nearly their lowest in relation to forward earnings in about a year.

Moderna (MRNA -4.04%) was one of 2020's hottest stocks. The shares rose 434% as investors bet on the biotech's ability to bring a coronavirus vaccine to market. They won that bet when the U.S. Food and Drug Administration authorized Moderna's vaccine in December.

But the Moderna opportunity isn't over. First of all, this company is just starting to see its first product revenue ever. And it's going to be in the billions. In fact, Moderna's advance purchase agreements for vaccine delivery this year represent $18.4 billion in revenue. Moderna also is working to expand use of the vaccine to children. It's now conducting clinical trials in children and teens. And the company also launched clinical testing for a strain-specific booster and a next-generation vaccine.

Here's the best news of all: Moderna probably won't be a one-hit wonder. Success in the coronavirus program proved the company's mRNA technology works in humans. And Moderna has more than 20 pipeline candidates based on that technology. The company also recently launched HIV and flu vaccine programs.

Moderna shares are down 15% since the start of February, and they trade at a modest less-than-six times forward earnings.

Nike (NKE -1.23%) is moving forward in its plan to connect directly with its fans. The company recently dropped more retailers -- including department store Macy's -- according to Retail Dive. Nike launched the plan in 2017 with the idea of selling more products online and in its own stores. That gives Nike more control over its products. And that's positive.

And Nike is showing it doesn't need other retailers to keep the brand in the spotlight. The company keeps in touch with fans through its apps -- and this really made a difference during the worst of the pandemic. Fans used the Nike Training Club App to exercise. And they got access to the latest sneaker releases and news through the SNKRS App. Use of the apps translates into buying, Nike said in the latest earnings call. Buying members of these fidelity programs increased 80% year over year in the most recent quarter.

In that quarter, ended Feb. 28, Nike's overall revenue rose 3%. Store closures in some locations still are weighing on business. But digital sales climbed 59%. And here's some evidence of Nike's brand power: The Jordan brand posted double-digit sales growth. I'm confident the connection with fans and brand strength will power Nike's sales and profit in the long term.

Nike shares are down about 6% this year. Nike's forward price-to-earnings ratio also is down by that much. And the earnings outlook remains positive. Estimates for the current fiscal year and the next are on the rise. 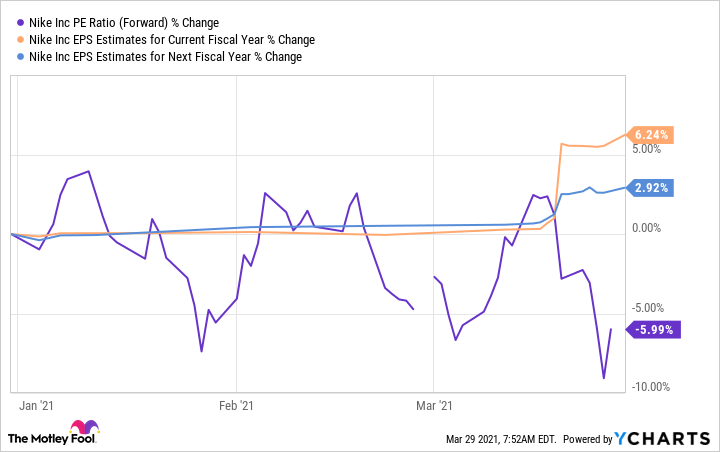 So, all three of these stocks have two things in common. Their shares are in a bit of a lull right now. And future revenue potential looks bright. That means now is a great time to consider these stocks -- whether you're a Robinhood investor or not.