Please ensure Javascript is enabled for purposes of website accessibility
Log In Help Join The Motley Fool
Free Article Join Over 1 Million Premium Members And Get More In-Depth Stock Guidance and Research
By Diane Mtetwa - Mar 31, 2021 at 7:55AM

If you're behind, here are three ways to catch up.

Are you socking away enough money in your 401(k) every year? If you don't think you're doing enough, you're not alone.

In January, TD Ameritrade published the results of a survey of 2,000 Americans that showed that 58% of people between the ages of 40 and 79 would give themselves a grade of C or lower when it comes to saving for retirement. 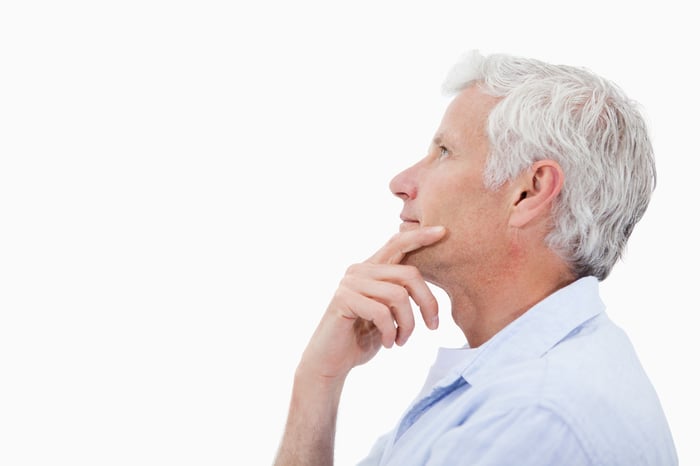 According to the TD Ameritrade survey, here are what the respondents in the various age groups said they currently had saved for retirement:

If you are one of the majority of Americans who feels as if you're behind or haven't saved enough, here are three ways to help you catch up.

More-aggressive investment accounts can help you achieve a higher average annual rate of return, which could get you to your goals sooner. For example, if you contribute $6,000 annually to an investment account that earns 6% a year on average, in 25 years, you could have $348,938. Those same contributions over the same time would've grown to $473,726 if you earned 8%, and $649,091 if you earned 10%.

Depending on your comfort level with risk, though, you may plan on decreasing your stock exposure as you age. Owning more stock can help you earn more on average, but it comes in exchange for more volatility. And experiencing a negative year in retirement is completely different from while you're working. If you had $100,000 invested into large-cap stocks in 2008, you would've ended the year with $63,000. But if you stayed invested, by the end of 2012, you would've had $108,587. And any contributions you made to your accounts during these four years would've helped grow your balance even more.

If instead, you entered 2008 while retired, your results would've differed greatly. Assuming you were taking 4% in annual withdrawals, your $100,000 would've shrunk by 41% and you would've ended the year at $59,000. Each subsequent year, your accounts would've been impacted by your withdrawals and you wouldn't have reached positive territory again until 2013, ending the year at $113,200.

If you can't take on extra risk, you can consider saving more each year. If you are someone who started saving later in life, you may benefit from having higher wages when you're older, which could make this easier.

Doing this may be easier said than done, though, if you're already finding it hard. But your 401(k) can be a great resource for saving more without coming up with the money yourself if you're eligible for a company match. With a match, your employer will contribute a percentage of your salary up to a maximum. So if you make $60,000 and your employer will contribute up to 5% of your salary, you could receive an extra $3,000 each year that could go toward your retirement.

Working longer could help you catch up by giving you back some years that you lost. If you didn't start contributing money toward your retirement until you were 40, retiring at age 65 would give you 25 years that you could use for saving. If you could save $10,000 a year earning 6% on average each year for those 25 years, you could grow your accounts to $582,000. Adding five years to your time horizon and pushing your retirement out could help you grow your accounts to $838,000.

You could also work longer as a way of reducing the amount of money that you need to save. If you determine that you won't have enough for your lifestyle in retirement, you can work part-time and supplement what you do have with your earnings.

If you started saving for retirement late in life, that doesn't mean you can't retire. But it may require you to rethink what your ideal retirement looks like and how you will get there. Creating a plan that starts with assessing where you are and identifying shortfalls will help you best reach this goal.