Please ensure Javascript is enabled for purposes of website accessibility
Log In Help Join The Motley Fool
Free Article Join Over 1 Million Premium Members And Get More In-Depth Stock Guidance and Research
By Jason Hawthorne - Mar 31, 2021 at 6:33AM

A vision for the future and a cheap stock price could make this the time to buy shares.

Pfizer's (PFE 3.59%) development of Comirnaty -- a vaccine against COVID-19 -- dominated conversations about the company last year. It continues to be what analysts and financial pundits talk about the most when discussing the company. However, the real story is CEO Albert Bourla's vision for a more streamlined, innovation-dependent company. He articulated his strategy when he took over in 2019, and Comirnaty is an early indication that the transformation is working.

Despite Pfizer's plans to deliver 2 billion doses of the vaccine in 2021, the stock is priced near the lowest multiples of projected sales and earnings since the SARS-CoV-2 virus was first reported. That could make shares of Pfizer one of the best deals in the stock market right now. 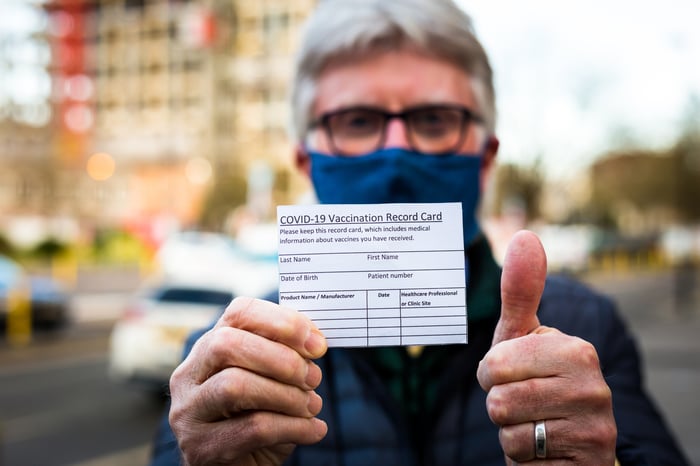 A shift to innovation

As Bourla tells it, every action the company has taken over the past few years has been to transform Pfizer into an agile scientific powerhouse. To this end, the company spun off its off-patent drug division with generic drugmaker Mylan into Viatris in November of last year. The segment's declining sales had reduced it from 26% of Pfizer's revenue in 2017 to only 20% in 2019. Similarly, the company combined its consumer health segment with GlaxoSmithKline, allowing the $90 billion U.K. drugmaker to control the entity. By jettisoning those businesses, the company plans to leverage previous acquisitions to fuel growth by developing and commercializing new, innovative drugs.

To do this, it will rely on acquisitions it made when Bourla oversaw the company's health business. Specifically, the company will keep counting on assets acquired in the $14 billion buyout of cancer-fighting Medivation and the $5 billion takeover of Anacor, which makes treatments for inflammatory diseases. Bourla has explicitly stated that he's much more likely to pursue many smaller deals, rather than one large deal, in future. It's an indication that he likes the company's position, and would only allocate capital in a way that produces additional sales and profits over the next few years.

To that end, the company has been highlighting the combination of science and patience. While the COVID vaccine will generate a financial windfall, leadership is thinking beyond the drug to the messenger RNA (mRNA) platform it relies on. Pfizer is already working toward a combination COVID-influenza vaccine, and says that though the mRNA technology has been validated, it's too early to talk about what other diseases the company might use it against. What Pfizer has talked about is having up to 25 new drug launches by 2025, with as many as nine having the potential for more than $1 billion in annual sales. Wall Street has been slow to give the company credit for that potential.

A cheap stock if experts are right

No one knows exactly how the pandemic will play out over the coming months and years. Will we need to get a vaccine every year, or will herd immunity take hold and eliminate the threat? Many experts and industry executives are leaning toward the vaccine becoming endemic, continuously circulating in the population. That means it's likely that people will need some form of booster shot or another full vaccine periodically. For Pfizer, that means the impressive sales and profit numbers it's projecting for 2021 may be more sustainable than once thought. It also means the stock is cheap based on that $60 billion in sales and $3.15 earnings-per-share (EPS) estimate. In fact, it hasn't been this cheap in a while: 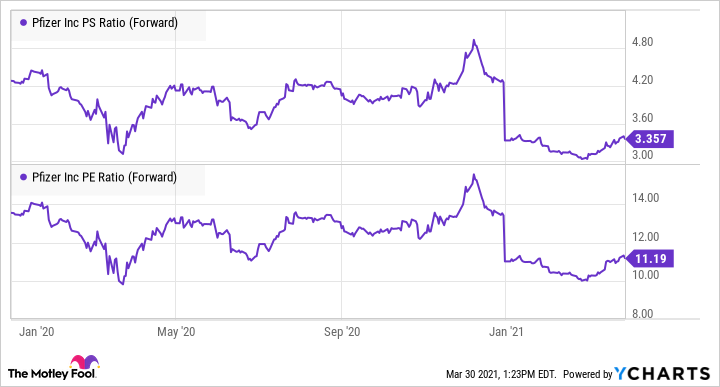 According to Bourla, even removing the COVID boost from 2021, Pfizer is growing sales at 6% and EPS at 11%. Furthermore, he agrees it is increasingly likely that annual revaccination will need to take place. Despite the potential higher baseline of business, the company doesn't plan any changes to how it spends its money. In the latest analyst update, the CFO responded to a question about using the extra cash for a big deal or special one-time dividend by breaking down the incremental profit, and explicitly ruling out any change to the current capital allocation strategy.

Pfizer has been on a transformation journey over the past half-decade, culminating in its role in helping to develop a vaccine to slow the global pandemic. Now, it seems that vaccine might keep producing sales and profit for years to come. Despite this, the company trades at a historically cheap multiple of both measures. For investors looking to get exposure to a large, stable dividend-payer with a proven plan to keep growing, it's hard to find a better portfolio candidate than Pfizer.