Please ensure Javascript is enabled for purposes of website accessibility
Log In Help Join The Motley Fool
Free Article Join Over 1 Million Premium Members And Get More In-Depth Stock Guidance and Research
By Taylor Carmichael - Updated Apr 1, 2021 at 8:12AM

Amarin and Accelerate Diagnostics are healthcare companies with significant upside.

Finding amazing stocks under $10 can be tricky. Last year, I hit the jackpot with Novavax (NVAX -9.46%), buying shares at $4, and then riding the stock all the way up to $300 a share earlier this year.

Can I replicate my Novavax success? That would be nice. Here are two stocks under $10 that might go a lot higher: Amarin (AMRN -7.09%) and Accelerate Diagnostics (AXDX 0.19%). Here's why I think these two biotech stocks have a good shot at outperforming the market over the next several years. 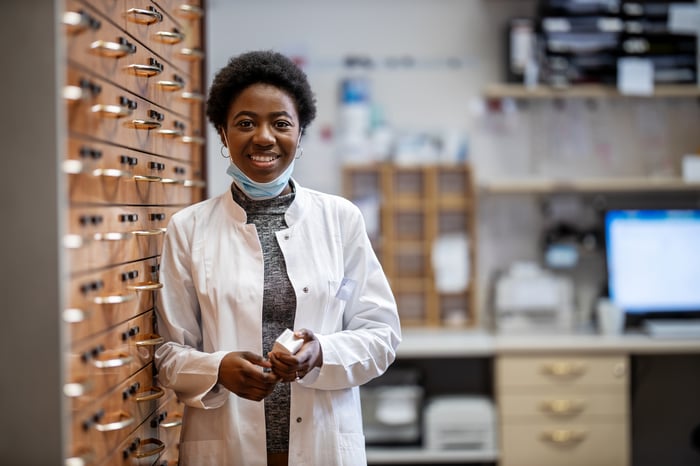 This Irish biotech is my favorite value play right now. The company has an amazing drug, Vascepa, which reduces the risk of major adverse cardiovascular events by 25% in people who are on statin therapy. This is big news, as it suggests a new understanding of heart disease, the No. 1 killer of humans -- namely, that it's not enough to control cholesterol with statins. Vascepa reduces triglycerides (a type of fat in your blood). According to a Harvard study from 2018, by reducing triglycerides, Vascepa succeeded in reducing heart attacks, strokes, and deaths.

Why is the stock so cheap? I see two reasons. Number one is the fact that the COVID-19 lockdown has hampered sales growth. Doctors have to be informed about new medical breakthroughs, but that's hard to do in the midst of a lockdown, during which it has been hard to reach doctors. Despite that difficulty, Amarin increased revenue by 43% in 2020. I expect that rate to increase dramatically when the COVID-19 lockdown is over.

The main reason the stock is cheap, however, is that a couple of Amarin's patents were invalidated by a trial judge last year. That's opened the door to generic companies offering a version of Vascepa in the U.S., and cast a cloud over the company's growth story. All that doubt has been baked into the share price, and then some.

Nonetheless, I expect Vascepa sales to spike in the future. The market opportunity is massive, as an estimated 80 million people in Europe alone have cardiovascular disease. Amarin's patents in the rest of the world remain intact, and the European Commission is now allowing Amarin to market the drug to reduce the risk of cardiovascular events. And the invalidated patents in the U.S. only allow competition in the market to reduce triglycerides, not in the market to improve heart health. In short, Amarin has an approved drug that will save lives, a huge market opportunity, a strong competitive moat, and a price-to-sales (P/S) ratio of 3. For those reasons, I'm bullish.

What is a common reason people die in hospitals? They get an infection. When a bacteria invades your body, your immune system fights back, creating inflammation. This fight might lead to sepsis, which can cause tissue damage, organ failure, and unfortunately, death.

According to a study published in The Lancet, 20% of people who die worldwide actually died from sepsis. 270,000 people in the U.S. perish as a result of the disease every year, costing the U.S. healthcare system $68 billion annually. Up to 80% of sepsis deaths could be prevented with rapid diagnosis and treatment.

The key issue confounding doctors is identifying which bacteria has infected the patient, and solving that mystery quickly. Once a patient has sepsis, without effective treatment, the odds of survival decrease by 7.6% every hour. Effective diagnosis is no good if it's too late to save the patient.

That's where Accelerate Diagnostics comes in. The company's medical device, the Accelerate Pheno, identifies the bacteria and the optimal therapy in under 16 hours. Conventional machines take 42 to 69 hours.

That's the ballgame right there. The faster the diagnosis, the more likely it is that you defeat sepsis. What's particularly nice for investors is that Accelerate has the classic razor-and-blades model that made Intuitive Surgical such an amazing investment. Placing the device in a hospital is just the first step. After the Pheno is installed, Accelerate will get recurring revenue from all the hospitals that use the device.

Sales of the Pheno have been escalating dramatically. The company reports that 268 systems have been placed in hospitals, with a backlog of 133. That leaves a vast market opportunity, with 6,000 hospitals in the U.S., and 160,000 hospitals worldwide.

COVID-19 threw a wrench at the company last year, and in the second quarter Accelerate only placed four devices in hospitals. In the fourth quarter, however, 45 new devices were installed. This escalating demand, despite the pandemic, is a reason for investors to be bullish for 2021.

While Accelerate is not cheap, trading at 42 times sales, the upside is substantial. Both Accelerate and Amarin are going after massive market opportunities. Amarin has the added benefit of being really cheap right now. If either healthcare company succeeds, these stocks will be worth many multiples of where they are now.