Please ensure Javascript is enabled for purposes of website accessibility
Log In Help Join The Motley Fool
Free Article Join Over 1 Million Premium Members And Get More In-Depth Stock Guidance and Research
By Keith Speights - Updated Apr 1, 2021 at 8:13AM

No fooling. These stocks should be winners.

Do you have some extra cash on your hands? Many Americans can probably answer that question with a resounding "yes" thanks to the latest round of stimulus payments. Some early filers might have even already received tax refunds from the IRS.

Paying off bills and building an emergency fund are the smartest uses of any extra money. Once you've done that, though, investing for the long term is a great next step. Whatever amount you have to invest, here are three top stocks that will make you richer in April -- and beyond. 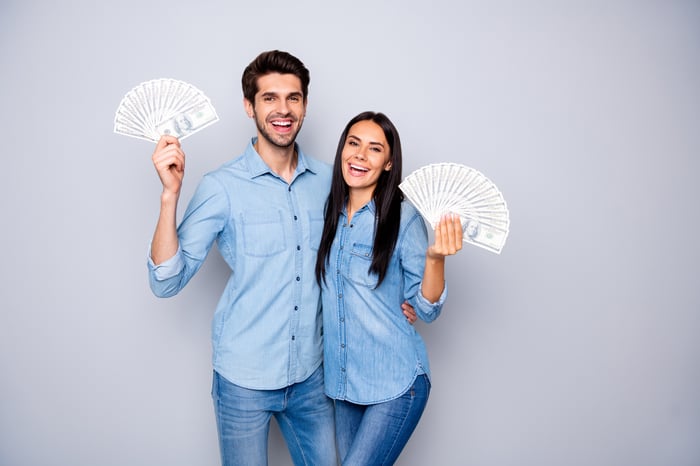 Shares of Brookfield Renewable Corporation (BEPC 0.09%) have fallen more than 20% so far this year. I think that makes this renewable energy stock an even more attractive pick in April.

Nothing about Brookfield Renewable's tremendous growth prospects has changed. The future of renewable energy is as bright as ever. Many countries and major corporations are committed to ambitious carbon reduction goals that will continue to drive increased demand for renewable energy.

Brookfield Renewable's installed capacity totals over 19 gigawatts. Its development pipeline stands at more than 23 additional gigawatts of capacity. The company expects to deliver average annual total returns of close to 15% over the long term. I think this stock is ready to rebound in April and keep making shareholders a lot of money for years to come.

Intuitive Surgical (ISRG -4.37%) is another stock that hasn't been a winner so far in 2021, with its shares down around 9%. Blame the pandemic for the malaise of the robotic surgical systems maker. Delayed nonemergency surgical procedures have hurt Intuitive.

But I view Intuitive Surgical as a likely COVID comeback story. Procedure volumes will snap back as worries about the coronavirus fade. And I expect that will happen to a large extent as more people are vaccinated over the next few months.

I'm especially optimistic about Intuitive's long-term prospects. Aging demographic trends should translate to higher volumes of the surgical procedures for which the company's robotic surgical systems are optimally suited. Intuitive also has significant opportunities to expand into new procedure types.

The company faces competition now after years of enjoying a monopoly in the robotic surgical systems market. My view, though, is that Intuitive's strong track record and huge customer base combined with a growing overall market should enable the company to return to its winning ways of the past. I think that Intuitive Surgical is a rock-solid stock you can buy and hold for practically forever.

PayPal Holdings (PYPL -3.22%) stock was up more than 30% in February. But a broad sell-off of tech stocks caused the fintech leader's shares to give up much of its gains. Still, PayPal remains in positive territory year to date.

Don't think for a second that PayPal will be hurt as the pandemic winds down. E-commerce sales should remain robust, with the company's payment method continuing to enjoy tremendous popularity. PayPal has also introduced QR code functionality for use with its payment apps in brick-and-mortar stores with close to 600,000 merchants now supporting the functionality.

The company's Venmo app is a key growth driver for PayPal. I look for Venmo to pick up additional momentum as new features are introduced. For example, PayPal recently launched a check-cashing feature that enables users to quickly and easily cash paper checks with Venmo.

PayPal also is expanding its focus on cryptocurrency with its pending acquisition of Israel-based digital asset security company Curv. With plenty of opportunities for growth in supporting cryptocurrencies and the continued overall shift to digital payments, I think that PayPal is exactly the kind of stock that can make you richer in April and beyond.

3 Unstoppable Stocks That Can Leave Dogecoin in the Dust

3 Disruptive Stocks to Buy and Hold for the Next Decade