Please ensure Javascript is enabled for purposes of website accessibility
Log In Help Join The Motley Fool
Free Article Join Over 1 Million Premium Members And Get More In-Depth Stock Guidance and Research
By Sushree Mohanty - Updated Apr 1, 2021 at 8:12AM

The U.S. state markets are presenting tremendous opportunities for this pot company.

The marijuana industry is flaring up again. Now that the sector is booming, investors are spoiled with too many choices to pick from. Luckily, there are a few good ones best suited for your portfolio. But this one, in particular, is my top cannabis stock -- a pure-play cannabis company (its entire business model is based on marijuana).

Illinois-based Cresco Labs (CRLBF 1.23%) has surged 274% over the past 12 months, outpacing the S&P 500's gain of 51%. No surprise here -- the stock performance reflects the rate at which the company grew its revenue last year. Though it doesn't have a wide national presence yet, I am happy to see the company staying strong in its home state and taking some major steps to make its mark in the alluring U.S. cannabis market. Let's take a look at its progress so far and its plans for the future. 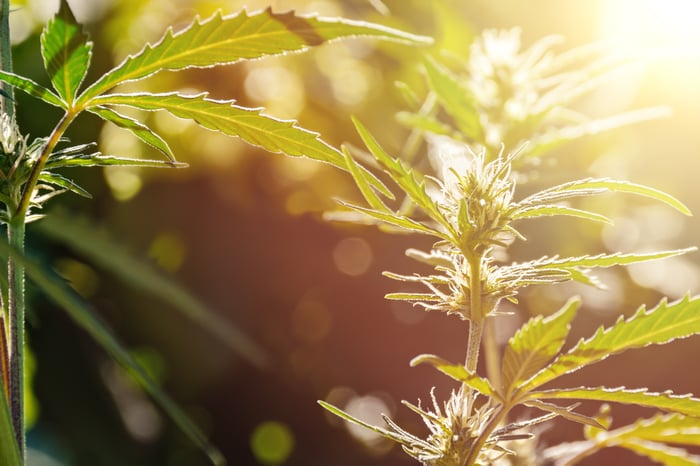 Cresco's 2020 revenue growth amid a pandemic is worth applauding

For the full year of 2020, Cresco saw a whopping 271% year-over-year increase in revenue to $476 million. The company's retail revenue for the year grew to $202 million, up 316% year over year. Much of the credit goes to its Sunnyside retail platform, which, according to the management, generated average revenue per store of $3.6 million. Cresco has 10 Sunnyside stores in the new emerging cannabis market of Illinois. ) Its fourth-quarter (ended Dec. 31, 2020) revenue also jumped a massive 292% year over year to $162.3 million.

Another quarter of positive adjusted EBITDA (earnings before interest, tax, depreciation, and amortization) net of biological assets of $50 million is an impressive jump from $2.8 million in the year-ago quarter. It also reflects how well the company has been handling its operating expenses. Cresco's 2020 was a reflection of what's to come in the next few years, according to the management.

In the Q4 earnings call, CEO Charles Bachtell stressed the fact that California is one of the most key markets for Cresco Labs. Winning in this state will make a significant mark in the U.S. cannabis space. I agree! Despite being the oldest, California is still the largest cannabis market generating an enormous amount of cannabis sales. In 2020, total cannabis sales in the state came in at $4.4 billion. California is also the most populous state, with 39 million residents.

Cresco's revenue from the state doubled since the first quarter and its "brand FloraCal was a top 10 flower brand in California during Q4," according to the management. Its other brands are also rising to be the number one in the state.

Another MSO (multi-state operator) understanding the value of this strong market is Green Thumb Industries, which just opened its first store in the state. Green Thumb holds licenses to 96 retail locations, so if it chooses to widen its footprint in California, it could give a tough fight to Cresco Labs.

Besides California, Cresco also has opportunities in its home state Illinois, which is an emerging cannabis market. Illinois legalized recreational cannabis on Jan. 1, 2020, and has seen outstanding sales since then. Total legal cannabis sales touched $1 billion, with $669 million just from recreational marijuana.

Investing its resources in strategic markets is a priority for Cresco in 2021, and the CEO expects to have "meaningful operations in all seven of the top 10 most populated states in the country that have cannabis programs." The company plans to earn more revenue and profits organically as well as through M&A (mergers and acquisitions).

Cresco Labs is in a stable financial position. It ended its Q4 with cash and cash equivalents of $136.3 million and total debt net of issuance costs of $184.5 million. As state legalization in the U.S. is ramping up, it will open exciting opportunities for the company.

As of now, 36 states and the District of Columbia allow medical marijuana, and an additional 15 and D.C. allow adult-use marijuana. New Jersey just legalized recreational cannabis, and Virginia could also join the list soon. Other states, such as Pennsylvania, New York, and Connecticut, also have cannabis legislation in the works.

A Democratic hold over the White House is also sparking hopes of federal legalization. This will allow pure-play cannabis companies to be listed on the major stock exchanges and have access to more financial capital, fueling their growth. The U.S. legal cannabis sales grew 46% from 2019 to $17.5 billion last year.

If and when federal legalization happens, not all marijuana companies will have the necessary finance and resources to expand. In such times, only the bigger companies will thrive. Given that Cresco Labs is heading toward profitability with drastic revenue growth and focusing on targeting the key cannabis markets, I see this marijuana company rising to the top and being absolutely worth purchasing and holding for the long haul.