Please ensure Javascript is enabled for purposes of website accessibility
Log In Help Join The Motley Fool
Free Article Join Over 1 Million Premium Members And Get More In-Depth Stock Guidance and Research
By Luis Sanchez CFA - Updated Apr 1, 2021 at 8:12AM

Heska has benefited from fast growth in the veterinary market, but should investors keep betting on the stock?

There are several large players in the world of animal health, including Idexx Labs and Zoetis, but Heska (HSKA 4.53%), a much smaller competitor, has outperformed its larger peers in terms of stock price appreciation over the past year.

Heska is an animal health company focused on providing diagnostic tools used by veterinarians. These are the types of tests that help analyze blood and urine samples to detect diseases in dogs and cats. The company has seen its stock skyrocket recently due to a boom in the pet healthcare market overall as more people adopt pets and visit veterinary clinics. Heska has also taken several interesting steps to set itself up for continued growth in the future, making the stock potentially lucrative for long-term shareholders. 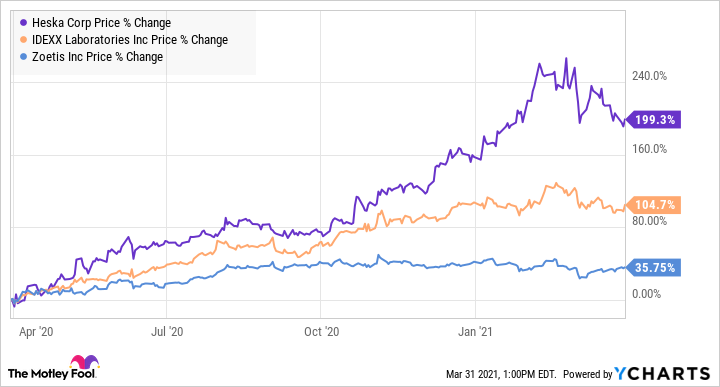 2020 was a banner year for Heska. The company grew total revenue by 61% and acquired two European animal health companies -- Scil and CVM -- that provide it with a foothold in the international market.

Both Scil and CVM operate in Europe and give Heska a foothold in important markets such as Spain, Germany, France, and Italy. These acquisitions position Heska perfectly going forward to grow in these new regions and operate with higher margins eventually due to scale benefits and cost synergies. For example, Heska has been able to move customers onto a subscription plan which guarantees a greater volume commitment and higher-margin product mix; successfully moving customers acquired from these acquisitions onto similar subscription programs will enable the company to generate more earnings on the same customer base.

Heska's core business also had a fantastic year. The company saw subscriptions for its diagnostic equipment grow 25%, driven by continued strong demand from veterinarians. Heska was also able to sell more consumables and tests to its veterinarian subscribers, resulting in higher revenue per customer. The combination of the acquired businesses, new customers, and greater revenue from existing customers was responsible for the eye-popping 61% growth in total revenue for 2020.

On the negative side, Heska saw its profit margins decline in 2020 due to the addition of the acquired companies, which operate at lower margins. However, the company has a plan to improve margins in the years ahead. 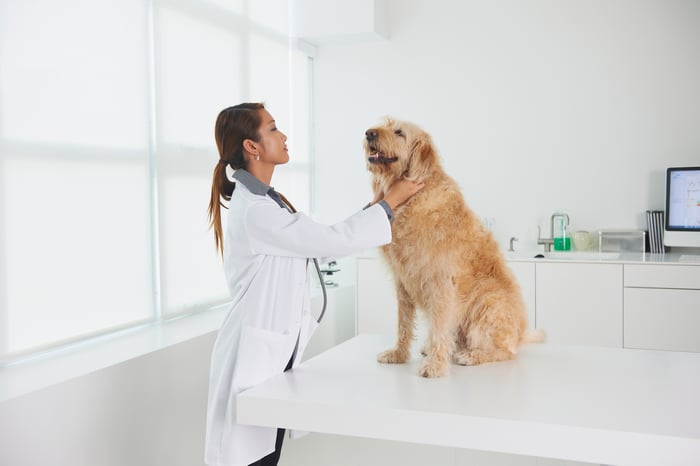 What to expect moving forward

Heska has all intentions of carrying its momentum into 2021. The company has set ambitious performance targets which aim for high revenue growth, continued subscription growth, and improved sell-through of high-margin veterinary test kit consumables. Margins are expected to come in lower than 2020, but the company plans to quickly bounce margins back and continue growing them as early as next year.

The growth expectations are supported by plans to introduce a new urine and fecal analyzer in 2021 called Element AIM. With these new diagnostic tests, Heska will be ahead of its larger competitors in bringing these specific solutions to market. Heska has already noted that the pre-order book has been strong and growing.

Element AIM is the first diagnostic test of its kind and uses artificial intelligence and a fully automated workflow system to make testing more efficient for veterinarians. The company thinks Element AIM could be a blockbuster and is targeting long-term revenue from it to exceed $500 million.

Is Heska a buy?

Heska has been a great stock to own over the past few years, driven by rapid top-line growth and a healthy pipeline of acquisitions and innovations. However, the company is competing against giants in the veterinary diagnostics industry. Idexx Labs is the market leader and has also grown by leaps and bounds. Zoetis has been investing in the diagnostics area as well with its $2 billion acquisition of Abaxis.

At the same time, Heska isn't profitable yet and doesn't generate a lot of free cash flow, which makes it relatively more expensive than its peers using conventional valuation metrics. However, with full credit to Heska, the company is on track to improve margins and financials across the board and grow its foothold internationally. This is all to say that Heska may be a great company with continued ability to grow, but it is probably a safer bet to stick with more established animal health companies such as Idexx Labs and Zoetis.