Please ensure Javascript is enabled for purposes of website accessibility
Log In Help Join The Motley Fool
Free Article Join Over 1 Million Premium Members And Get More In-Depth Stock Guidance and Research
By Billy Duberstein - Updated Apr 1, 2021 at 8:13AM

Down 35% from recent highs, the laser photonics specialist just won a bidding war for Coherent.

The market never likes it when a company engages in a bidding war. Case in point: the massive 35% haircut laser photonics-maker II-VI (IIVI 0.70%) has taken since Feb. 11. That's when it hit all-time highs; the following day, it made a massive acquisition bid for photonics rival Coherent (COHR 0.24%). Combined with the recent technology sector sell-off, it's no surprise to see II-VI well off its highs.

II-VI just won that war, but the price tag was costly. It's cash-and-stock deal totaled a whopping $7 billion, much higher than the initial $5.7 billion bid from Lumentum Holdings (LITE 0.38%) back in January. The stock is now on watch at leading rating agencies for a potential downgrade, and investors are staying away.

Still, there could be an opportunity among all the pessimism, leading me to initiate a position. 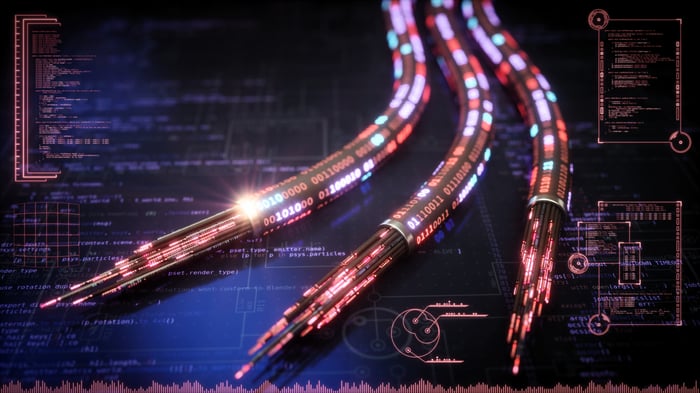 II-VI is a synergy machine, with a history of success

II-VI was already the largest company in the laser photonics space, and has a history of successfully integrating large acquisitions. Therefore, it believes it can wring out more post-merger synergies than rivals would.

When you think about it, II-VI's offer isn't really so much more expensive than Lumentum's when factoring this in. Essentially, it's paying an extra $1.3 billion, but is also garnering another $100 million of synergies. So, it's really only paying a 13x multiple of extra operating income.

Additionally, II-VI has a history of outperforming its synergy targets in past acquisitions. The company made its last sizable acquisition in 2019, when it acquired fellow optical system producer Finisar. Initially forecasting $150 million in synergies within 36 months, II-VI has already achieved $110 million in just over one year, and now projects it will reap $200 million in total synergies, better than initially forecast. It has also been able to de-lever after taking on debt to fund the acquisition, going from nearly 4x debt-to-EBITDA to under 1x in just over a year.

Coherent also had a nice complementary business to II-VI, which will diversify II-VI's business mix considerably. In a somewhat cyclical industry like lasers and photonics components and systems, diversification really helps. It means steadier earnings and cash flow, which allows for investment in research & development and capital expenditures through the cycle, putting it at an advantage over competitors.

Although II-VI was previously exposed to a number of megatrends across materials processing, consumer electronics, semiconductor equipment, life science applications, and aerospace and defense, it still garnered 68% of its revenue from the communications vertical in 2020. And that industry is highly dependent on the investment cycles of telecom operators, cloud infrastructure companies, and other data center builders.

After acquiring Coherent, which is more exposed to semiconductor equipment and materials processing, the "new" II-VI will be much more diversified, with the communications sector still the largest end-market, but only accounting for 48% of sales, down from 68%.

I've written before about how II-VI is exposed to not one but several long-term growth markets across 5G, autonomous vehicles, cloud computing, advanced semiconductors, and genomics, all within a single company. These include a number of markets with very high growth, such as 5G radio antenna components, and 3D sensing/lidar systems for consumer electronics and self-driving cars. Each of those applications could grow over 20% compounded for the next few years, fueling 10%-plus overall industry growth, according to Bain Capital.

It's one thing if an industry consolidates because it is in decline, which can happen. But it appears this merger is still within a secular growth industry, and the combined companies' increased scale will enable them to capitalize on new opportunities.

It should also be noted that Lumentum wound up raising its bid even slightly higher than II-VI's offer at the end of the bidding war, at which point II-VI said it would not raise its bid above $7 billion. And yet, Coherent still chose to go with II-VI's offer and pay Lumentum a breakup fee as well. That should certainly say something about II-VI's relative standing in the industry.

The reasons likely relate to II-VI's history of getting acquisitions successfully through the regulatory process, along with the company's record of successfully integrating past acquisitions and its industry-leading research and development budget.

In addition to all these positives, private equity firm Bain Capital is also on board, contributing $1.5 billion to the acquisition in the form of convertible preferred equity, and is open to contributing up to $2.15 billion if need be. Likely, that could be determined if II-VI needs to avoid a debt-rating downgrade by ratings agencies.

The preferred equity shows confidence in II-VI's stock prospects in the years ahead. The preferred stock comes with a 5% annual dividend, but that dividend will be paid "in-kind" (which means in stock instead of cash) with a cash option after four years. The notes will also come with a conversion option at a price of $85 per share, compared with a $66 stock price today and $100 before the recent stock swoon.

In any case, Bain isn't investing in II-VI to just make 5%. Obviously, Bain thinks the deal could lead to tremendous growth and profitability in the years ahead. It even uploaded its own investment thesis to II-VI's investor relations site.

A good value in a pricy market?

No doubt, II-VI will have a significant $5.4 billion in debt after the close, or 4.8 times the combined companies' EBITDA. So there is some risk.

We are currently in a semiconductor shortage, however, and all of the big digital megatrends that were kick-started by the pandemic aren't slowing down anytime soon. While high-growth, unprofitable software stocks are still expensive, this "industrial" part of the tech sector really isn't, and could further benefit from potential "build back better" initiatives. That's why I was excited to take a position in II-VI after the recent stock swoon, with the Coherent integration ahead.