Please ensure Javascript is enabled for purposes of website accessibility
Log In Help Join The Motley Fool
Free Article Join Over 1 Million Premium Members And Get More In-Depth Stock Guidance and Research
By Sam Swenson, CFA, CPA - Apr 2, 2021 at 6:09AM

It's never a bad time to search for beaten-down stocks that are profitable on paper.

Searching for value stocks is pretty simple: Find financially robust companies that have performed poorly from a share price perspective, and buy them when they're down. When the share price comes back to reality, you'll be a winner. Wall Street has the habit of kicking a stock when it's down, as negative sentiment surrounding a particular name can spell doom for shareholders.

For those seeking value, these moments present an opportunity. Here, we'll look at three value stocks that have seen better days, but also have a good chance at rebounding.

Over the past five years, Gilead Sciences (GILD 1.03%) has managed to lose about 40% of its value on the open market, and has vastly underperformed a passively held index fund over the same period (as shown below). As a market leader in the oncology, HIV, and hepatitis C drug markets, respectively, the company produces a suite of antivirals for typically hard-to-treat illnesses. While Gilead was -- and is -- front-and-center during the pandemic in its production of Veklury (more commonly known as remdesivir), it is not one of the major vaccine producers.

Perhaps the better news for those considering a Gilead investment is that the company is fundamentally quite strong. It trades at 9 times earnings, which is comparably cheap across the large-cap biotech sector. It projects a strong 2021, releasing guidance for revenue of $25 billion and EPS in the $7 range .

Put simply, the company trades at an attractive price relative to the earnings it generates, and the hope is that patients start treatment for other viral and chronic (non-COVID) illnesses now that the pandemic has waned a bit in the early part of the year. 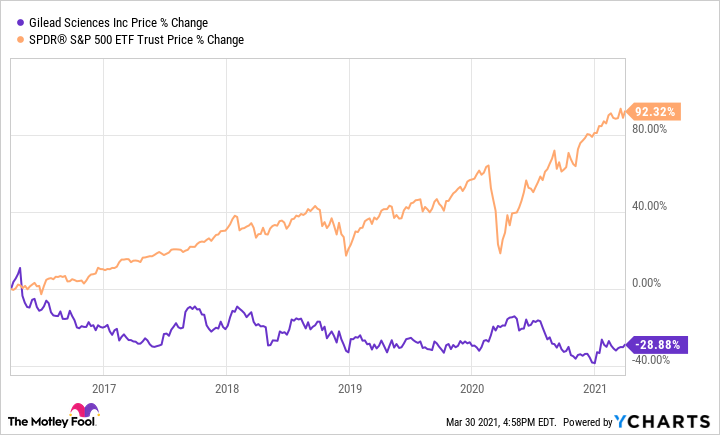 Despite a stagnant stock price -- DISH Network (DISH 6.04%) has fallen from just under $50 per share to around $35 today -- there is reason to believe a comeback is in the works. The stock currently trades at 11 times earnings, relatively cheap based on today's standards, and posted strong revenue growth in 2020, up about 40% from 2019.

DISH has engaged in a few creative partnerships; perhaps the most promising of the bunch is a pact with DraftKings, which seeks to offer sports betting from DISH set-top boxes. The underlying current here is that DISH Network has shown an ability to think outside the box, which is reflected in its profitability measures. It is a buy at its current price, and has an opportunity to stage a comeback in the coming years. 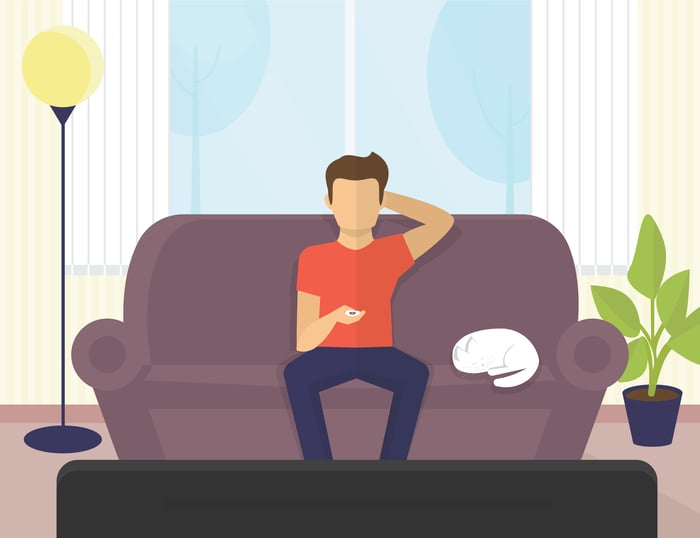 While not the most high-flying name you've ever heard, Tupperware Brands (TUP 7.23%) simply runs a sustainably profitable business. Last year's earnings were $2.24 a share, and the stock currently trades around $25 per share, leading to a current price-to-earnings ratio of only about 11. While overall sales were down in 2020, profitable sales growth rose, a sign that the company is still able to control costs and make money in the most difficult of circumstances.

The stock has also lost two-thirds of its value since 2013 but remains profitable. According to its year-end press release, the company has been successful in restructuring its debt and executing on its turnaround plans (especially concerning its core businesses). Shares remain cheap for the moment, but the fact remains: The company makes money and has the financials to prove it.

When in doubt, seek value

The basic premise of value investing is to find profitable companies that happen to be on sale in the open market. While single-stock investing is far from a guaranteed strategy, it's worth looking into seemingly "forgotten" companies that simply have not yet had their day in the sun. Companies that have demonstrated their ability to grow and sustain profitability are your best bet, especially when they're cheap.