An eventful month for the Chinese electric-vehicle maker didn't end a downtrend in the stock.

Shares of popular Chinese electric-vehicle (EV) maker NIO (NIO -2.76%) sank 14.9% in March, according to data provided by S&P Global Market Intelligence. That added to a February drop, bringing the two-month decline to more than 30%.

NIO shares soared along with other stocks in the EV sector in 2020. But as interest rates began to rise in early 2021, investors started to rotate out of high-growth stocks like NIO that are valued on future earnings, and into value names.

NIO also had company-specific news in March, including releasing its fourth-quarter and full-year 2020 financial results, and a direct impact from the global semiconductor shortage.

On March 1, NIO reported fourth-quarter 2020 results that met analyst expectations on revenue of about $1 billion, but showed a higher net loss than was expected. While vehicle sales soared more than 130% in the fourth quarter and more than doubled for the full-year versus the prior-year periods, investor expectations are high after the stock gained more than 1,100% in 2020.

Shares took more of a hit later in the month of March, when the company said it would be suspending production for five days due to the shortage of semiconductors that has impacted many other global automakers.

NIO estimated the production shutdown could reduce its first-quarter deliveries by up to 1,000 vehicles, to 19,500. Investors responded by knocking shares down more than 5% the day of the announcement. Subsequent to the end of the month, however, NIO reported first-quarter deliveries of 20,060. This was within the company's original guidance range, and represented growth of 423% over 2020's first quarter.

The stock has rebounded off recent lows, but is still more than 36% off highs reached in early February. 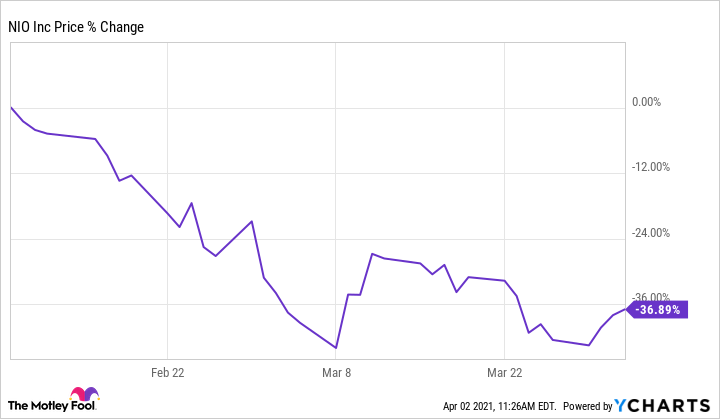 Investors are also looking forward to the launch of the ET7, NIO's first luxury sedan. It should be available early next year, and is available with a larger 150 kWh battery pack that will provide a range of about 621 miles, according to the company.

With a market capitalization of over $60 billion even after the stock's retrenchment, the company will have to continue its pace of sales growth and make the ET7 a hit with customers. There's a huge potential EV market in its home country alone, and the company could grow into its valuation quickly if the business doesn't experience further interruptions.