Make sure you're realistic about where your benefits fit into your plans.

Social Security benefits are probably going to be important to your financial security in retirement. But you need a realistic assessment of what they will -- and won't -- do for you.

Unfortunately, many Americans either overestimate the financial help Social Security will provide or are too gloomy about the program's prospects.

To better understand what you can actually expect, here are five key facts about Social Security you should know when making retirement plans. 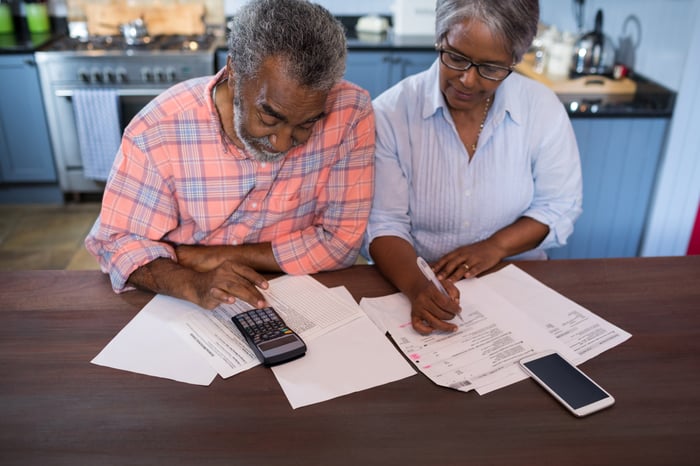 Far too many young Americans don't believe Social Security will be there for them at all. In fact, many people think the entitlement program is on the verge of bankruptcy.

The reality is very different. Social Security is supported by payroll taxes from current workers as well as by a trust fund that covers any shortfalls.

As long as people are working and paying into the system, which will continue unless the law changes, there will always be enough cash coming in to pay out most of the promised benefits.

2. It is in financial trouble

While you don't have to worry about getting no benefits, you do need to be aware that Social Security's financial situation isn't perfect.

Specifically, its trust fund is expected to run dry by around 2035. If that happens, and lawmakers don't make a fix, the program will only be able to pay out benefits from the payroll taxes coming in. The problem is, they provide enough money to pay only around 76% of what retirees are due.

It's more likely than not that lawmakers will prevent a 24% cut from occurring, as no politician wants to preside over a big reduction in these benefits. But some of the approaches to shoring up the program's finances, such as raising full retirement age, would also mean a de facto benefit cut.

For that reason, future retirees can't necessarily count on their benefits looking exactly the same as they expect under the current rules.

3. It only replaces 40% of pre-retirement income

Even under the best-case scenario, Social Security as it's currently structured isn't going to be enough to provide 100% of the money you'll need for a comfortable retirement.

Benefits are intended to replace around 40% of the income you had prior to retiring. Taking a 60% pay cut would obviously lead to a drastic reduction in your quality of life.

4. More of your benefits will be taxed later

Unfortunately, you may not get to keep all of the benefits that you have coming to you. The IRS takes a cut once income reaches a certain threshold.

And that threshold is not indexed to inflation. Since the average benefit goes up every year to keep pace with rising prices and wage growth -- even as the income you can earn without owing taxes remains unchanged -- more retirees end up taxed on benefits over time.

Unless lawmakers change the current rules on when taxes kick in, more than half of all retirees are going to lose some of their Social Security funds in the future. And those who live in the states that tax benefits can expect to pay out even more.

5. The death of your spouse can mean much smaller household benefits

If you're married and your spouse passes away, you should be entitled to survivors benefits.

If your spouse was the higher earner, your survivors benefits should be bigger than the checks you'd get based on your own work record. If you earned more than your spouse, you'd likely keep collecting on your own record.

But whether you collect survivors benefits or not, you'll see a big drop in your Social Security income after you become widowed because your household will be getting one check instead of two.

Be prepared for the reality of Social Security

The reality is, while you will get at least most of your promised benefits, Social Security isn't going to provide all the money you need -- and your financial situation is likely to become even more precarious after the death of a spouse if you're relying too much on the program.

To make sure you aren't left with a retirement full of money worries, plan to have a generous nest egg to supplement your Social Security benefits. Start saving for that goal ASAP; amassing the money will be easier if you start when you're young.