Please ensure Javascript is enabled for purposes of website accessibility
Log In Help Join The Motley Fool
Free Article Join Over 1 Million Premium Members And Get More In-Depth Stock Guidance and Research
By Alex Carchidi - Apr 4, 2021 at 7:23AM

Only if you're looking for a highly speculative buy to hold for the long term.

Would you want to buy a stock that grew by more than 2,280% over the last 12 months? If you're like most investors, you're already salivating. But you may want to suppress your appetite for juicy gains to evaluate the situation a bit more closely first.

It's easier for small, new companies to keep growing after such a massive expansion, and that's exactly why Ocugen (OCGN -7.14%) is still in play for future skyrocketing. Ocugen is a very young biotech company that's already made a name for itself by being confident enough to dabble in diverse fields like gene therapy and coronavirus vaccines, and its roller coaster of a stock could still have more peaks and valleys ahead. Let's see why it might be worth buying this month and why cooler heads might want to take a year or two to mull it over. 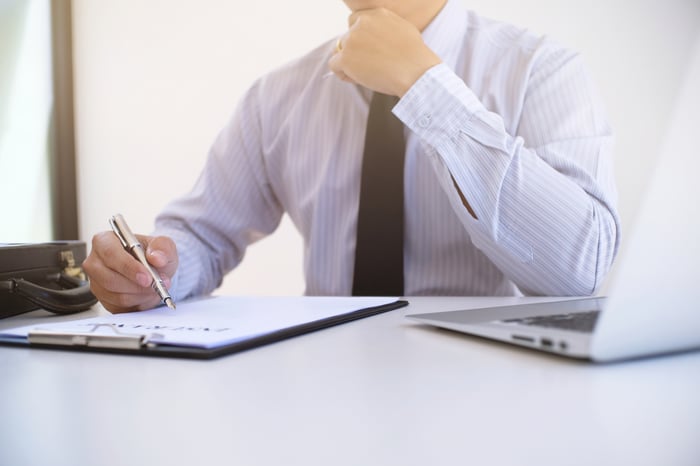 The biggest reason to buy this stock in April is that it could spike later this year as a result of reporting revenue for the first time. In February, the company struck a deal with Bharat Biotech to manufacture the Covaxin coronavirus vaccine, which was recently shown to be safe and 81% effective in a phase 3 clinical trial in India. Ocugen's agreement stipulates that it will manufacture and sell the vaccine in the U.S. and capture 45% of the profits from its sale.

If Covaxin gets regulatory approval in the U.S. later this year, it'll mean that Ocugen will have a significant revenue stream. Importantly, new income from vaccine sales could enable it to report positive earnings for the first time, which would likely cause the stock to rev up even more than the revenue inflows alone, at least for a while. At the moment, it only has $42,620 in trailing revenue, so any additional money could be fuel for the company's research and development (R&D) pipeline.

On that note, in terms of its financial strength, the company is in acceptable shape for an early-stage biotech. It has just over $24 million in cash, and around $2.1 million in debt. In 2020, its net losses were $21.8 million, meaning that it will need to raise cash to survive relatively soon. But it should be able to take on new debt or issue new stock to raise funds, so there's no risk of it going bankrupt anytime soon.

Why it's probably better to wait

Covaxin has a few steps ahead before it can receive emergency use authorization (EUA) in the U.S. If everything goes as planned, it'll be available on the market sometime in the latter half of this year. That's problematic, given that larger competitors like Pfizer, Moderna, and AstraZeneca are already rolling out at mass scale. By the time Covaxin is commercialized, the U.S. might have the vast majority of its vaccine demand in the rearview mirror. Then there's the fact that the competitive landscape for coronavirus vaccines will be dramatically different next year, when even more candidates are approved for sale. At that point, Ocugen may have trouble capturing a significant share of the market unless its vaccine is significantly cheaper or more effective at combating the next strains of the virus -- and neither possibility is anywhere near guaranteed at the moment.

But what about the company's other projects? Without exception, they're so new that they haven't entered clinical trials at any phase as of yet. As an example, Ocugen's OCU400 gene therapy project, intended to treat eye diseases like Leber congenital amaurosis, is still at the earliest stages of clinical development. Management expects that OCU400 could be approved in 2025 or 2026. There's nothing wrong with that timeline, but investors could probably have a lot more confidence in the quality of their investment if the company had at least one successful clinical trial phase in the bank.

For me, Ocugen is too far from experiencing revenue from internally developed therapy sales to buy in the short term, but I'd still consider it for the most speculative segment of my portfolio. Of course, taking a more conservative position carries a risk of missing out on the stock's potential gain from its upcoming Covaxin sales. And investing now would be the only way to capture gains from the company's future growth, which could well be quite significant. But if your goal is to invest in quality companies at the right price, I think you'll be better served by waiting until Ocugen has proven its quality with successes in the clinic and potentially in the market for coronavirus vaccines.