Please ensure Javascript is enabled for purposes of website accessibility
Log In Help Join The Motley Fool
Free Article Join Over 1 Million Premium Members And Get More In-Depth Stock Guidance and Research
By Billy Duberstein - Apr 4, 2021 at 10:00AM

The leading semiconductor equipment company by revenue continued to benefit as the global race in advanced chip production heated up, amid severe semiconductor shortages across a broad range of applications. 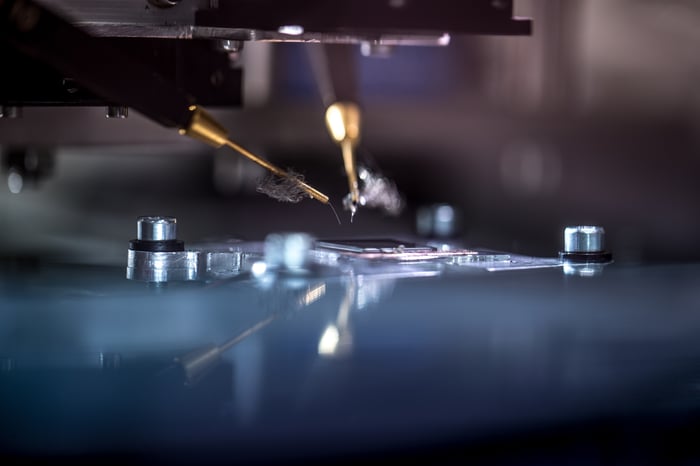 Applied Materials had already been up strongly on the year, amid a blowout February earnings report, as well as increased spending forecasts from large customer Taiwan Semiconductor Manufacturing (TSM 3.22%) in January. Widespread reports of a severe semiconductor shortage this year have also pushed sentiment higher for Applied as well.

The good news kept on coming in March, when Intel (INTC 3.06%) held an event updating investors on its future production strategy. Intel has struggled with its 7-nanometer chip production in recent years, falling behind Taiwan Semiconductor and leading some to believe Intel may scrap its in-house production entirely. Yet new CEO Pat Gelsinger did the opposite, announcing Intel would instead invest $20 billion in two new fabs (chip factories) of its own in Arizona, while also becoming a foundry for other chip designers.

That means there will be another large buyer for Applied Materials' machines, as companies and countries around the world seek to own significant in-country chip production.

Not only is Intel looking to invest in more U.S. chip production capacity, but semiconductors are also part of the Biden administration's new infrastructure bill, The American Jobs Act. About $50 billion of the $2 trillion bill will be geared toward advanced semiconductor research and manufacturing.

For much of the past two years, amid the trade war, Applied Materials was a cheap value stock. Now, with pandemic-era digitization trends accelerating and countries realizing the need to have critical capacity on their own shores, demand for leading semiconductor manufacturing equipment is soaring. No wonder Applied's stock is up so much this year. Even more strikingly, the company still only trades at 22 times this year's earnings estimates.

The company will hold its next investor meeting on Tuesday, April 6.

The Semiconductor Shortage Is Far From Over, According to Industry Executives

This Manufacturing Company Is a Cash-Generating Machine