The company isn't generating any Bitcoin-mining revenue, but that's on purpose.

Shares of cryptocurrency-mining company Marathon Digital Holdings (MARA 2.61%) soared on Monday after the company provided investors with a business update. Specifically, the company is mining more Bitcoin (BTC 2.41%) than ever right now, and it laid out detailed plans for its continued progress in the coming year. As a result, Marathon Digital stock was up 15% as of 2:30 p.m. EST.

According to the official press release today, Marathon Digital mined 196 Bitcoins in the first quarter of 2021, including just over 102 in March alone. The company is systematically increasing its computing power (known as its "hash rate") to be able to mine more and more Bitcoin. And considering the value of Bitcoin continues to climb in 2021, the ability to mine more understandably excites investors. 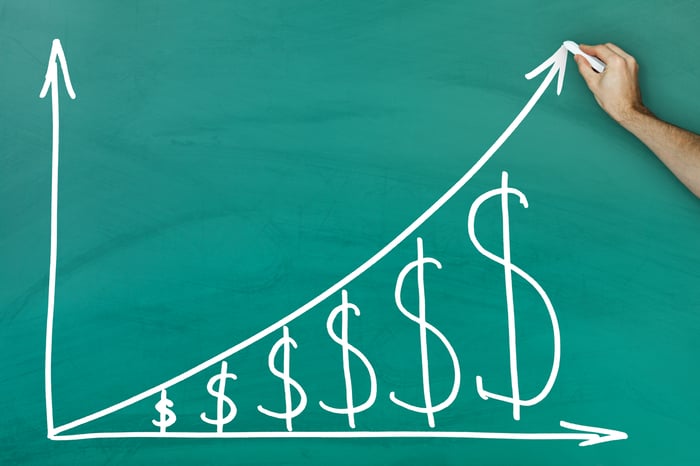 Also in the press release was Marathon Digital's plans to increase its hash rate on a monthly basis between now and January 2022. All told, the company expects to go from 0.71 exa-hashes per second (EH/s) now to 10.37 EH/s by then -- a greater than fourteen-fold increase over the next 10 months. This doesn't necessarily mean it will be mining 14 times more Bitcoin. How much it's able to mine is contingent on what the overall hash rate of the Bitcoin network is by then, which we don't know.

I believe it's fair to say that the overall hash rate of the Bitcoin network will be higher in January 2022. However, it seems unlikely to go up 14 times between now and then. Therefore, it seems likely to me that Marathon Digital will be consistently mining over 100 Bitcoins per month in the coming year. But it's too speculative to guess just how many it will mine for sure. 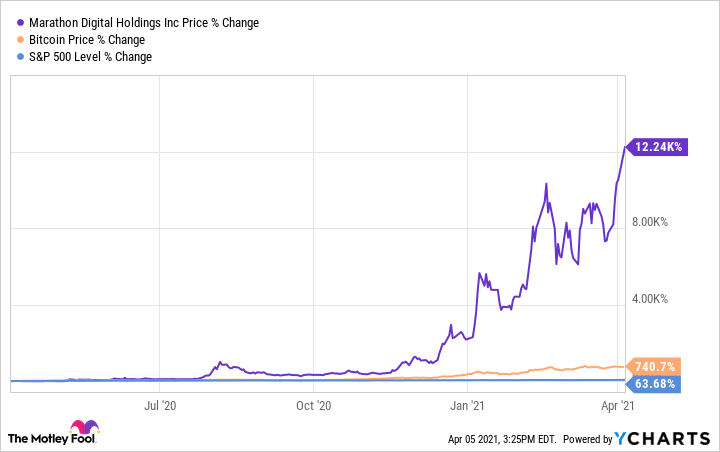 Over the past year, Marathon Digital stock has significantly outperformed the stock market and Bitcoin. MARA data by YCharts.

To me, Marathon Digital stock looks excessively valued. Its price-to-sales (P/S) ratio, according to Yahoo Finance, is over 1,200; a good P/S ratio for stocks is historically between one and two. However, to be fair, Marathon Digital's P/S ratio should be kept in context. It's artificially high because the company isn't even trying to generate revenue right now. That might sound counterintuitive or even crazy, but a cryptocurrency miner like Marathon Digital only generates revenue when it sells the cryptocurrency it's mined, in this case Bitcoin. It doesn't generate any revenue when it mines it.

Marathon Digital isn't generating revenue because it hasn't sold any Bitcoin since October. In short, management believes the price of Bitcoin will continue to climb and is holding 5,134.2 Bitcoins because of this belief. If they're right, then it indeed makes sense to not sell any Bitcoin right now even if it means revenue is non-existent.

In the interim, management has been funding ongoing operations and growth with cash on hand, which is still over $200 million. With that much cash, Marathon Digital shouldn't have any problems running its business for a long time even in a zero-revenue situation.