Please ensure Javascript is enabled for purposes of website accessibility
Log In Help Join The Motley Fool
Free Article Join Over 1 Million Premium Members And Get More In-Depth Stock Guidance and Research
By Keith Noonan - Updated Apr 5, 2021 at 9:02AM

Despite the recent sell-off, the stock is still up 581% over the last year.

Shares of UP Fintech Holding (TIGR 5.51%) dipped 25.4% in March, according to data from S&P Global Market Intelligence. The stock lost ground despite a strong quarterly report and favorable analyst coverage. 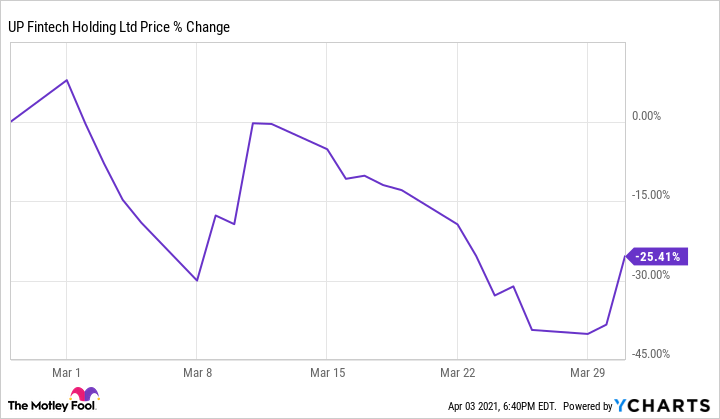 UP Fintech operates Tiger Brokers, a Hong Kong-based online equities trading platform that has been gaining popularity in China. The company's share price has skyrocketed over the last year thanks to encouraging user addition and engagement trends, but the stock pulled back amid a broader sell-off for growth-dependent technology stocks in March. 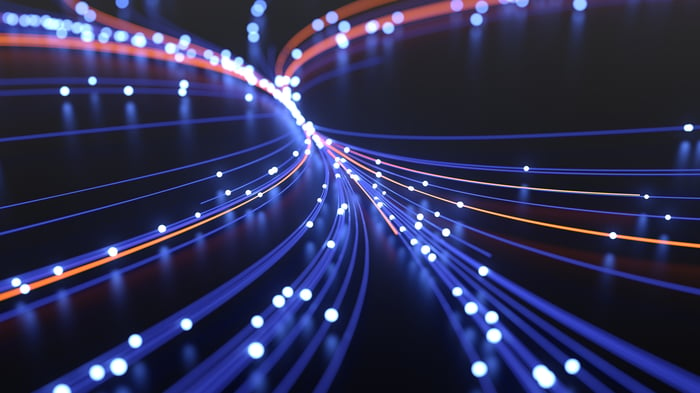 Despite last month's sell-off, news was generally positive for UP Fintech. CICC analyst Zeyu Yao published a note initiating coverage on UP Fintech on March 4, giving the stock an outperform rating and putting a one-year price target of $30.60 per share (it closed at just under $17.60 last week). Yao sees the fintech's relatively low commissions and high-quality user experience helping the company increase its market share.

UP Fintech also posted strong performance when it reported its fourth-quarter results on March 26. The company's sales climbed 136.5% year over year to reach $47.2 million in the quarter, and the company's adjusted net income for the period hit $10.3 million, nearly 30 times what it recorded in the prior-year quarter and working out to adjusted per share earnings of $0.07. The average analyst estimate had called for sales of roughly $41.2 million and earnings of $0.04 per share.

UP Fintech stock dipped a bit early in April's trading. The company's share price has fallen roughly 0.7% in the month so far. 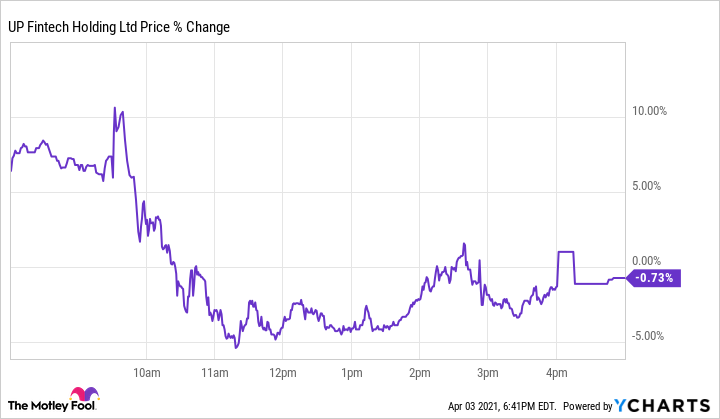 Its valuation remains highly growth-dependent, but its Tiger Brokers platform appears to be gaining traction at an impressive clip. The company managed to add 44,000 new, funded accounts in the quarter, roughly 3.9 times higher than its user-addition figure in the fourth quarter of 2019. This year, UP Fintech expects that it will add 344,000 new paying members to its platform.

The company has a market capitalization of $2.5 billion and is valued at approximately 9.7 times this year's expected sales and 56.7 times expected earnings.