Please ensure Javascript is enabled for purposes of website accessibility
Log In Help Join The Motley Fool
Free Article Join Over 1 Million Premium Members And Get More In-Depth Stock Guidance and Research
By Mike Price - Apr 6, 2021 at 6:30AM

Here's how to get in on private equity returns usually reserved for accredited investors.

Private equity can be a mystery to everyday investors. You have to be accredited to even have access to it. That means you've had over $200,000 of income in each of the past two years and expect to make the same amount going forward.

Private equity (PE) funds try to do in private markets what mutual funds do in public markets, with a key difference. Rather than buy shares of a public company, PE funds engage in leveraged buyout (LBO) transactions to scoop up the whole thing. They buy the business using a ton of debt with the goal of overhauling its strategy and selling it years later for a profit. In the meantime, the business makes the debt payments, freeing the PE fund to buy more businesses.

There is a side door that you can use to get access to PE funds: Several PE firms trade on the public stock market. The PE business is attractive because it participates in the upside (usually firms earn 20% of profits) without having to put up its own capital. The business leverages already highly leveraged transactions.

Buying PE firms is a great way to invest when you think a downturn could be coming. When the market crashes, these funds will have the capital to swoop in and take advantage of depressed prices. Let's take a look at KKR (KKR -2.84%) and Blackstone (BX -2.09%). 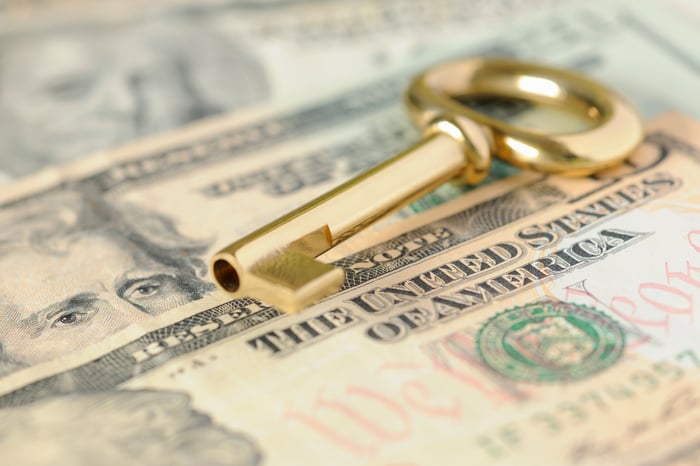 Kohlberg, Kravis, and Roberts, or KKR, is the O.G. of the private equity industry. The company executed its first leveraged buyout in 1976. Its most famous transaction was detailed in the seminal Barbarians at the Gate: The Fall of RJR Nabisco and took place before I was born, in 1988.

That doesn't mean KKR is a has-been. KKR's total assets under management (AUM) have almost doubled over the last five years, jumping from $130 billion to $252 billion. Part of that amount is the $69 billion in investments that KKR reports on its balance sheet.

Unfortunately, $69 billion isn't actually KKR's direct investments in its own funds. Private equity balance sheets are notoriously complicated. According to KKR's own calculation, about $20 million ($23.09 per adjusted share) of its reported $41 billion in book value is attributable to stockholders. The rest goes to noncontrolling interests.

Noncontrolling interests are one of those weird accounting practices that most investors don't have the time to learn about. KKR is required to report the financials of subsidiary businesses that it does not fully control and that shareholders do not have a direct stake in. The important part is that KKR has compounded book value at a 17% rate over the past five years.

It has done that by producing above-average returns in its funds. The funds have produced a gross return of 25.6% annually (18.8% net) since that first leveraged buyout in 1976. More recently, seven of the 10 funds started in the last five years have average annual returns over 20%.

KKR was able to take advantage of the ongoing bull market to generate high returns over the last five years, returning roughly 250% to investors, but a bear market doesn't mean the growth would need to stop. KKR chooses when to sell its portfolio companies and can continue holding them (while scooping up other investments) if the price isn't right.

If KKR is the O.G. in the industry, Blackstone is the 800-pound gorilla. Blackstone's total AUM of $619 billion dwarfs any other private equity firm. Its $100 billion in 2020 capital inflows were more than the total AUM of all but the top five biggest firms in the world.

Its AUM is divided among private equity, real estate, hedge fund solutions, and credit & insurance. $135 billion of it is in so-called perpetual capital, which has an indefinite life and no requirement to be returned to investors. Blackstone can invest that capital on any time frame and liquidate it when it makes the most sense.

The bigger you are, the harder it is to perform. Blackstone's net average annual returns aren't as high as KKR's, but at 16% annualized, they're still nothing to sneeze at.

Blackstone's history as a stock is interesting. It went public as a master limited partnership, where it was required to pay out 90% of its net income as distributions. In July 2019, it converted to a corporation. This made it far easier to hold the stock and resulted in a quick 50% gain over the next six months (and its five-year stock return is over 160%). Even after the change, Blackstone still pays a healthy 3% dividend. Because of that dividend payment, though, it hasn't retained as much in earnings as KKR, and its book value is around the same today as it was in 2015.

The two companies have differing strategies. KKR retains earnings and invests its balance sheet in its own funds. Blackstone makes some investments, but prefers to pay out excess cash to shareholders.

Should you use the side door?

Blackstone and KKR have both been riding the wave the past few years, compounding their stock prices at a high rate. When the wave inevitably crashes, they will be there to pick up the pieces and position for the next upturn.