Please ensure Javascript is enabled for purposes of website accessibility
Log In Help Join The Motley Fool
Free Article Join Over 1 Million Premium Members And Get More In-Depth Stock Guidance and Research
By Evan Niu, CFA - Apr 6, 2021 at 8:00AM

When Tesla (TSLA 2.55%) reported first-quarter deliveries last Friday, the U.S. market was unable to react since it was closed in observance of Good Friday. The figures easily crushed analyst expectations, despite the fact that production of the company's flagship Model S and Model X vehicles has been halted, as Tesla is retooling those production lines for the refreshed versions that were announced earlier this year.

In the wake of the news, Wedbush analyst Dan Ives upgraded his rating on Tesla shares from neutral to outperform while boosting his price target from $950 to $1,000. Here's what investors need to know. 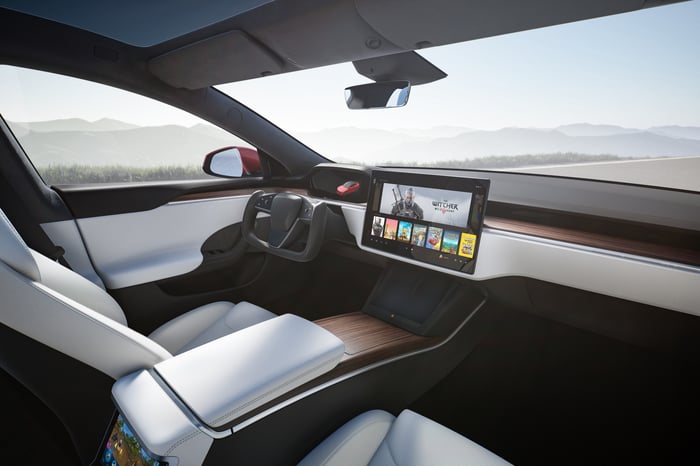 In terms of the production and delivery numbers, the electric vehicle (EV) leader delivered nearly 185,000 vehicles in the first quarter, while analysts were expecting just 168,000 deliveries.

Tesla noted that the Model Y, which recently commenced production at the company's factory in Shanghai, is enjoying a strong reception in China. Meanwhile, early reactions to the updated Model S and Model X interior are also encouraging. The interior refresh is the most meaningful update to the more expensive vehicles to date, although some aspects such as having the cars predict which gear the driver wants to be in are controversial.

Wedbush was particularly impressed with the results, suggesting that Tesla could be a long-term beneficiary of what Ives dubs a "Green Tidal Wave" thesis. There are high expectations that the Biden administration will enact policies that are supportive of EVs and the broader fight against climate change, including the possibility of reinstating the EV federal tax credit for Tesla and General Motors.

"In our opinion the 1Q delivery numbers released on Friday was a paradigm changer and shows that the pent-up demand globally for Tesla's Model 3/Y is hitting its next stage of growth as part of a global green tidal wave under way," the analyst wrote in a research note to investors. "We now believe Tesla could exceed 850k deliveries for the year with 900k a stretch goal, despite the chip shortage and various supply chain issues lingering across the auto sector."

Topping 850,000 in 2021 deliveries would represent significant growth from the roughly 500,000 cars that Tesla delivered in 2020. Tesla provided ambiguous guidance when it reported fourth-quarter earnings in January, merely saying that it expects to grow deliveries by 50% annually on average over a "multi-year horizon." Some years may see deliveries growth in excess of 50%, and Tesla expects 2021 to be one of them.

EV stocks, many of which have merged with special-purpose acquisition companies (SPACs), have been crushed so far in early 2021 as investors rotated out of speculative growth companies. But there are still fundamental catalysts on the horizon, as President Biden recently unveiled a $2 trillion infrastructure plan that includes funding for EV charging stations.