Please ensure Javascript is enabled for purposes of website accessibility
Log In Help Join The Motley Fool
Free Article Join Over 1 Million Premium Members And Get More In-Depth Stock Guidance and Research
By Rick Munarriz - Apr 6, 2021 at 10:50AM

The world's largest cruise line operator gears up for a financial update. It's time to sink or swim for Carnival.

There's no sugarcoating how ugly Carnival's (CCL -3.31%)(CUK -3.32%) financial update will be this week. The world's largest cruise line operator will provide fresh financials for its fiscal first quarter on Wednesday morning, and it won't be pretty.

Wall Street pros are forecasting a brutal 96% plunge in revenue. A huge quarterly deficit will reverse a modest profit from a year earlier. None of this is a surprise, and if anything analysts may be underestimating the carnage. Most of Carnival's fleet is still months away from generating revenue. With its monthly cash burn rate of $530 million a month the red ink will flow in this week's report.

That's the bad news, but there is a silver lining here. This should be Carnival's next-to-last atrocious year-over-year decline in revenue. The comparisons will get a lot easier from here soon. 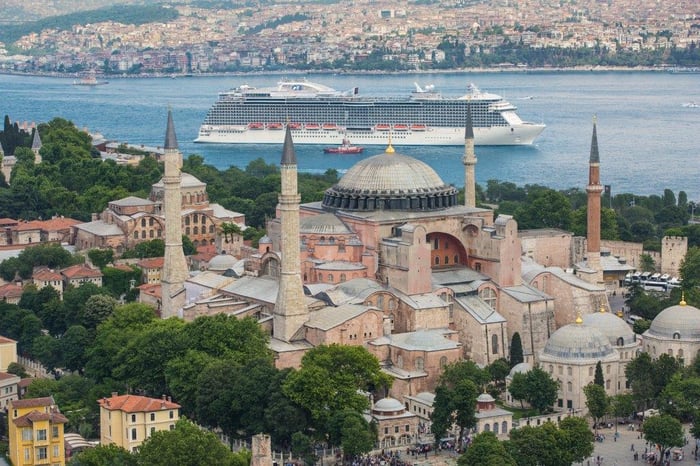 Sailing in a new direction

The current quarter began in March, and a year earlier it was just a couple of weeks into the new fiscal period when the cruising industry shut down in the wake of the COVID-19 calamity. The fiscal second quarter will be rough, but not generating less than 4% of the revenue it did a year earlier rough. Top-line results will turn positive in the fiscal third quarter, and with the long road back that Carnival faces it should be the first of several consecutive periods of year-over-year revenue gains.

Right now Carnival turning the corner might not seem like enough. The stock isn't as cheap as the long-term price chart suggests. With all of the fresh shares and debt that the cruise line has taken on to improve its liquidity its enterprise value is higher now than when it was hitting 52-week highs in early 2020. Carnival's enterprise value is approaching $50 billion, more than the cruise ship line was worth early last year even though the share price was almost double what it is now.

What can investors look forward to in Wednesday morning's financial update? The market won't react to the microscopic revenue and sharp quarterly deficit. That's obvious. There won't be any guidance to offer since the cruise lines still don't have a firm handle on when they will be able to resume regular operations. The real attention grabbers will be any changes to its cash burn, a number that's been pretty steady since the second half of last year. Are more people accepting future cruise credit over cash refunds for the voyages it had to cancel during the quarter? This is a metric that matters because it shows how fed up even loyal customers are becoming with the industry.

Finally we have booking trends. With restart dates perpetually getting bumped and near-term calls now even more fuzzy it's hard to see a lot of excitement about future bookings for 2021 sailings. The good news here is that with the economy starting to improve and stimulus checks rolling in, we could be seeing fresh money being earmarked for sea-sprayed getaways in 2022. There may even be some riverboat gamblers taking advantage of great deals on potential 2021 fall and holiday sailings.

Financial performances and guidance are the drivers during earnings season but those needle movers don't apply to the cruising industry right now. Carnival bulls and bears alike will be watching for retention, liquidity, and long-term bookings to decide which way the stock moves in the latter half of this week. Cruise lines have the most challenging path to get back on track among the travel and tourism stocks, but with so much of the bad news already baked in, all it takes is a whiff of optimism to start sailing in the right direction.