Please ensure Javascript is enabled for purposes of website accessibility
Log In Help Join The Motley Fool
Free Article Join Over 1 Million Premium Members And Get More In-Depth Stock Guidance and Research
By Rick Munarriz - Apr 6, 2021 at 10:05AM

Movie theaters have their strongest weekend since the pandemic, but it might not be enough.

It's been two weeks since I argued that AMC Entertainment Holdings (AMC -8.03%) is finally at the point where headwinds are turning into tailwinds. Last month, the country's largest multiplex operator reopened theaters in its largest New York and California markets. AMC now has 99% of its movie theaters open. Vaccination rates are improving, and it won't be just seniors returning to the cinema before long.

You also have its largest rival, Regal Cinemas, finally starting to fire up its projectors, which is a good thing for AMC, since it will encourage Hollywood to come back to theatrical distribution. With this weekend's debut of AT&T's (T 0.94%) Godzilla vs. Kong generating the best U.S. box office receipts in more than a year, it's easy to wonder if the multiplex industry is back. This weekend offers a glimpse of a potential rebound, but AMC and its smaller peers still have a lot to prove before the credits start to roll. 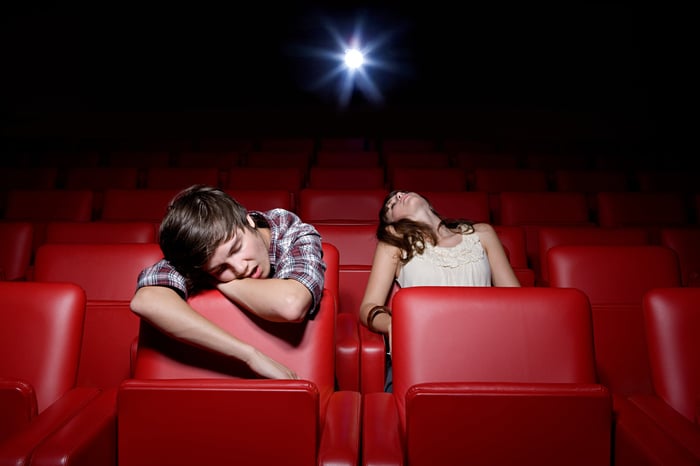 Godzilla vs. Kong scored several stateside records. It now has the best opening, single-day, three-day, and five-day opening weekend grosses of the post-pandemic era. The $48.5 million in box office receipts that Godzilla vs. Kong delivered in its first five days of domestic screenings easily shatters high-water marks set by Tenet and Wonder Woman 1984 -- both also films put out by AT&T's Warner Bros. -- released late last summer and over the holidays, respectively.

Sticking to the three-day weekend, all movies on the silver screen raked in a total of $44.7 million in U.S. ticket sales, the industry's best showing by far since the industry temporarily shut down in mid-March of last year. That's encouraging news for AMC Entertainment and AT&T, but let's not go hog wild on the popcorn. You have to go back more than a decade to find the last time a pre-pandemic weekend fared as poorly as $44.7 million in domestic box office receipts.

It's a sobering stat, but now let's frame this achievement in a more bullish light. Theaters had just one major release commanding the lion's share of this past weekend's ticket sales. Things will get significantly better as more media stocks join AT&T in growing more comfortable with theatrical releases. If any rival studio had cold feet about returning to the corner multiplex Godzilla vs. Kong should provide the foot warmers.

The good news doesn't end there. Godzilla vs. Kong opened in many overseas markets a week earlier, and it has now grossed $285.4 million worldwide in two weeks. Folks are coming back to the movie house in countries where the pandemic is fading in the rearview mirror.

Perhaps the best news is that Godzilla vs. Kong was the best multiplex performer in more than a year despite also streaming for subscribers of AT&T's HBO Max service at no additional cost. The theatrical release window is narrowing for the industry, but it's apparently not a deal breaker for the right film.

We're still not at the point where AMC and the rest of the industry can operate profitably, but now let's see how this plays out when summer blockbusters start to comfortably arrive near the end of next month. It's a multiplex summer, but unlike Godzilla vs. Kong you don't have to pick a side in this fight.