Please ensure Javascript is enabled for purposes of website accessibility
Log In Help Join The Motley Fool
Free Article Join Over 1 Million Premium Members And Get More In-Depth Stock Guidance and Research
By Jim Halley - Apr 6, 2021 at 6:20AM

There's a word that explains why Johnson & Johnson stock is so popular -- dependability.

Johnson & Johnson (JNJ 1.75%) is the very definition of a value stock: five consecutive years of annual revenue growth, an above-average dividend that has been raised for 58 consecutive years in a row, and a diversified product portfolio capable of weathering various lawsuits, pandemics, and whatever else gets thrown its way.

Last week, it was reported that a batch of 15 million doses of the company's vaccine that was being made for Johnson & Johnson by Emergent BioSolutions (EBS 11.49%) had to be thrown out because a mistake had been made regarding one of the batch's ingredients. Emergent's stock dropped on the news; J&J stock didn't. Now, Johnson & Johnson has been directed by the U.S. government to take over vaccine operations at the facility.

That's how it goes when you are one of the world's biggest, baddest companies in healthcare, with a market cap of $429 billion. 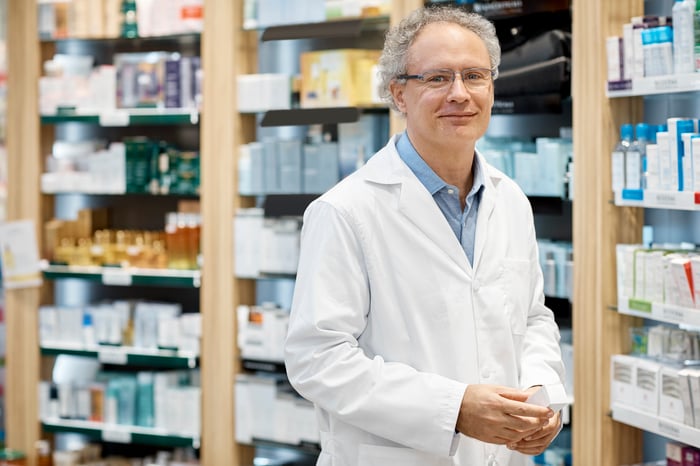 Why buying Johnson & Johnson stock is usually a good idea

The global pandemic adversely affected most medical companies for a variety of reasons. People made fewer trips to their doctors, so not as many new medications were prescribed and fewer surgeries were scheduled. Despite that, Johnson & Johnson still reported full-year revenue of $82.6 billion, an increase of 0.6% over 2019. Net earnings were $14.7 billion, down 2.7% year over year.

The pharmaceutical company has a huge stable of drugs, but three did particularly well last year. Stelara, a biologic that treats various immune system-related diseases, such as Crohn's disease, psoriatic arthritis, and plaque psoriasis, enjoyed sales of $1.5 billion, a rise of 20.6% year over year. Darzalex, a therapy for multiple myeloma, grew sales to a reported $692 million, up 42.4% year over year, and B-cell cancer drug Imbruvica saw reported sales of $492 million, a rise of 17% over 2019.

Johnson & Johnson's most struggling segment, not surprisingly, was medical devices, reflecting an industry trend last year. The company said its surgery, orthopedics, and vision businesses were particularly affected by the delay of medical procedures. The decline was partially offset by growth in its interventional solutions business led by its electrophysiology products. The medical devices segment's annual sales were a reported $22.9 billion, down 11.6% year over year. Sales were still down in the fourth quarter, though only by 0.7% year over year, not as much as in prior quarters. Its third segment, consumer health, posted revenue of $14 billion last year, up 1.1% year over year. Like medical equipment, that's another area likely to bounce back this year as the pandemic ebbs. 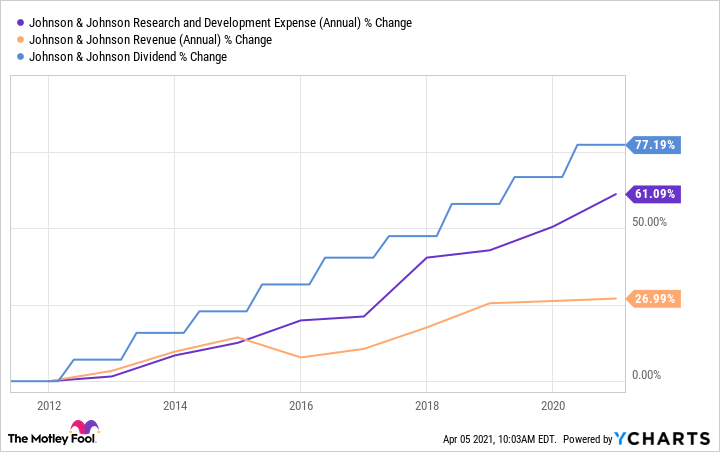 Johnson & Johnson is one of the biggest companies in the world, with 132,000 employees. It stays at the top by constantly innovating. Last year, the company spent $12 billion on research and development, more than some companies' total annual budgets. Over the past 10 years, it has increased its R&D spending by 61%. That spending manifests itself in different ways. Johnson & Johnson dominates the electrophysiology market in the U.S., mostly for products to diagnose and treat cardiac arrhythmias. That's an area expected to grow into a $10.6 billion market by 2025, with a compound annual growth rate of 9.1%, according to a MarketsandMarkets study.

There are other reasons to feel bullish about the company's prospects this year.

Johnson & Johnson didn't get emergency approval for its COVID-19 vaccine until February. The company has agreed, for now, to sell the vaccine for cost, but down the line, it could end up being the best-selling COVID-19 vaccine because it can be stored with standard refrigeration and can be given in one dose. It is also being sold for less, giving it a market advantage.

The company predicted revenue this year to be between $90.5 billion and $91.7 billion and adjusted earnings per share (EPS) between $9.40 and $9.60. Even the low end of those estimates would mean 9% revenue growth and EPS growth of 17%.

It's good to be a king

Johnson & Johnson is in a select group as a Dividend King, one of only 27 companies that have raised their dividends for at least 50 years. Investors who had spent $1,000 on Johnson & Johnson stock 10 years ago and reinvested the dividends would have about $3,690 today.

This is a company built for the long haul, and is ideal for long-term investors. You're not going to see a meteoric rise in the company's earnings or stock price, but you're not going to see it plummet, either. That explains why Johnson & Johnson is a good stock to buy in nearly any month. However, the last year has kept the company's stock price in check, so April is a good time to buy it.