Please ensure Javascript is enabled for purposes of website accessibility
Log In Help Join The Motley Fool
Free Article Join Over 1 Million Premium Members And Get More In-Depth Stock Guidance and Research
By Adria Cimino - Apr 6, 2021 at 6:00AM

Experts worry about how trial data was analyzed.

A crucial moment for biotech giant Biogen (BIIB 3.40%) is only two months away. The U.S. Food and Drug Administration will decide whether to approve aducanumab, an investigational Alzheimer's treatment. Late last year, an FDA advisory panel advised regulators to give the candidate the thumbs-down.

A spark of hope came weeks later: The FDA said it needed more time to make its decision. Then, just last week, three members of the FDA advisory panel wrote a piece in The Journal of the American Medical Association (JAMA) reiterating their negative views on aducanumab. Is this another strike against Biogen's prospects? Let's take a closer look. 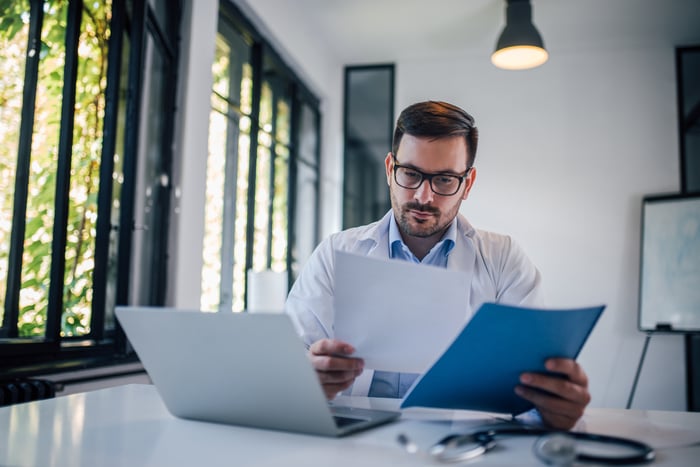 First, a little background on the aducanumab story. Biogen discontinued the drug's development in early 2019 after a trial analysis showed it was unlikely to meet endpoints. The company surprised investors later in the year when it revived the program and said it would submit aducanumab for regulatory approval.

Biogen said a broader data set showed that, in fact, the drug was efficacious. In the trial called "Emerge," aducanumab reduced decline in patients' daily function and cognition. In the "Engage" trial, it didn't. The difference? The Emerge participants received higher doses of the drug.

The FDA advisory panel in November voted that it wasn't "reasonable" to judge the effectiveness of aducanumab on the Emerge trial alone. In the recent JAMA piece, Drs. G. Caleb Alexander, Scott Emerson, and Aaron S. Kesselheim didn't introduce new reasons to doubt aducanumab's efficacy. But they reiterated their earlier concerns.

A big issue for the panel was that the new analysis was done post hoc. In this type of analysis, researchers consider results after a trial is over -- and they don't follow a plan established prior to the trial. This type of analysis carries the risk of "inadvertently selecting data precisely because those data were consistent with the outcomes that were hoped for," the experts wrote in JAMA.

They said post hoc analyses are useful in designing future trials -- but they shouldn't be the sole element supporting regulatory approval.

Is this recent reiteration of a negative view -- from experts advising the FDA -- more reason to worry about the upcoming decision? Not necessarily. The FDA already heard these arguments from the panel members back in November. The JAMA article doesn't bring up new concerns.

The FDA clearly is putting a lot of time into the aducanumab case. An example is the extension of its decision deadline by three months, to June 7. And, if approved, the drug could be a game-changer. It would be the first Alzheimer's drug to reduce decline in cognition and daily function. More than 6 million Americans suffer from Alzheimer's, according to the Alzheimer's Association.

So, does this mean we shouldn't worry about the upcoming decision? Not necessarily. The panel brought up valid points -- and the FDA often follows advisory committee advice. Of candidates that weren't backed by its advisory committees over a 10-year period, according to McKinsey & Co. research, the FDA decided not to approve 86%.

A positive decision is particularly important to Biogen, due to its growth position right now. The company's big multiple sclerosis (MS) blockbuster Tecfidera is losing sales to generics. The company had hoped to transfer patients over to its newer MS drug, Vumerity. But that isn't happening quickly: Vumerity sales totaled only about $64 million in the U.S. last year. That's compared to $2.6 billion last year for Tecfidera in the U.S.

As for share price, Biogen has gained about 13% so far this year; that's positive news. But the stock still is down 41% from its record high in 2015. An aducanumab approval could be key to progressing toward that level once again. In fact, it's likely that an approval would send the stock skyrocketing.

But what if the FDA doesn't give aducanumab the nod? The shares would suffer in the near term. Over the longer term, though, progress with Vumerity and the advancement of other pipeline programs could bring this biotech company new growth -- and share-price gains.