Please ensure Javascript is enabled for purposes of website accessibility
Log In Help Join The Motley Fool
Free Article Join Over 1 Million Premium Members And Get More In-Depth Stock Guidance and Research
By Jason Hawthorne - Apr 6, 2021 at 6:57AM

The leading developers of mRNA drugs hope the claim turns out to be foolish.

Developing a vaccine to combat the SARS-CoV-2 virus was no small feat. Previously, the fastest vaccine ever developed took four years. Beginning in less than one year from initial development, people around the world are being inoculated with mRNA that hijacks the protein-building instructions cells use for nearly every bodily function. 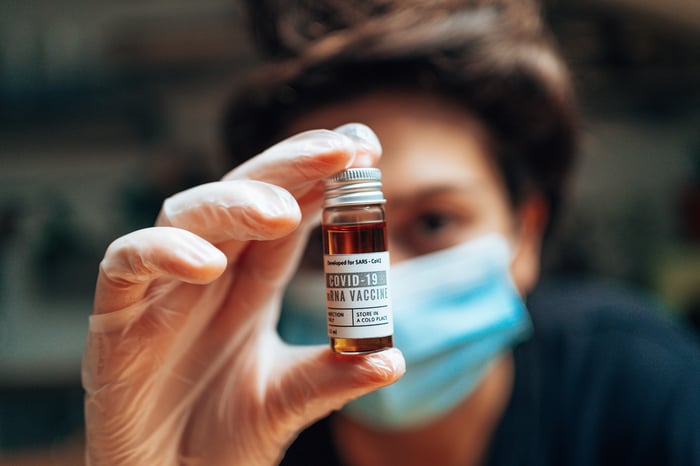 A short history of messenger RNA

DNA stores the instructions cells use to make proteins.  Messenger RNA (mRNA) is just as important: It carries the genetic code from the DNA to the protein-making machinery. Despite being relatively easy to produce, no mRNA vaccine had ever won approval prior to the COVID pandemic. When research began in the 1990s, it was considered too outlandish to gain any support or funding. In fact, Katalin Kariko, the researcher who finally cracked the code, was demoted at the University of Pennsylvania for her lack of progress.

Despite her theory making biological sense, the immune system would quickly destroy any synthetic RNA it found. Ten years after her demotion, Kariko solved the mystery and published a series of papers. That research caught the eye of at least two scientists, the ones who would go on to found Moderna and BioNTech.

Fast-forward to 2021, and those companies have multiple drug candidates in their respective pipelines to fight viral illnesses, cancer, and other diseases. Moderna has 27 candidates at some stage of clinical development while BioNTech has 22. Of course, both also now have authorized vaccines for COVID-19.

You might think a decade of work and portfolio of drug candidates would offer some protection against rivals. You might also expect that strategic partners might recognize the expertise required in developing those pipelines. If you do, Pfizer's CEO Albert Bourla thinks you're wrong.

Bourla recently discussed his company's experience as BioNTech's partner on Comirnaty, their joint COVID-19 vaccine. He claimed the past year has given his company a decade's worth of experience. He also believes Pfizer is now the leading mRNA company and doesn't want to lose its advantage. He said his company will be hiring staff and leveraging the new mRNA manufacturing network it developed last year. Despite stating that he liked working with BioNTech, he was clear he didn't think the partnership was necessary, saying: "We have developed our own expertise."

What this means for investors in BioNTech and Moderna

Even if Pfizer succeeds on its own, the market for biotechnology is large enough to support many winners. Case in point, Pfizer is already partnering with BioNTech on a vaccine for influenza, a $5 billion market. The company also anticipates producing Comirnaty for several years, with analysts predicting $10 billion in sales next year and $2.4 billion in 2025. With a 50-50 split of the profits, that gives each partner plenty of capital to support its trials in multiple diseases.

Pfizer might have built out an impressive network of mRNA manufacturing and logistics in 2020, but scientifically its last year was a bust. Ibrance, its key breast cancer drug, failed its attempt to become an early-stage treatment. Its arthritis medicine, Xeljanz, showed an increased risk of heart attack and cancer compared to alternative treatments.

This means there are two smaller, more nimble biotechs at the forefront of a new industry. Pfizer will no doubt be a formidable competitor: Any $200 billion company would be when it decides to do something new. However, it is a stodgy old pharmaceutical giant with a lot of money but a spotty recent track record. It's trying to transform, but there isn't a lot of proof yet.

For shareholders of Moderna and BioNTech, Pfizer's claim validates how large the opportunity must be. The two upstarts will likely continue producing innovations, and Pfizer will likely make contributions in the field of mRNA. It's just that those contributions are more likely to be based on the manufacturing network it has established than on scientific discovery. Until Pfizer proves it can go it alone, Wall Street will likely continue betting on the companies with the intellectual property. Investors who want exposure to the future of mRNA probably should too.