Stocks were generally higher on Tuesday morning, with most major market benchmarks continuing to climb and add to Monday's gains. Overall enthusiasm about the prospects for the stock market kept investors feeling good about the prospects for further rises in the most popular indexes both in the U.S. and abroad. As of just before noon EDT, the Dow Jones Industrial Average (^DJI 0.03%) had inched lower by 17 points to 33,510. However, the S&P 500 (^GSPC 0.01%) had moved further into record territory, gaining 7 points to 4,085. The Nasdaq Composite (^IXIC 0.00%) had even bigger gains of 65 points to 13,771.

There has been a lot of interest lately in stocks that offer alternative power sources to standard internal combustion engines, especially given the rise in electric vehicle stocks and suppliers. The latest beneficiary of that trend on Tuesday was Romeo Power (RMO -3.23%), whose shares soared on news of a new collaboration. Meanwhile, Credit Suisse (CS 0.44%) revealed just how much damage it took in its lending to a highly leveraged hedge fund that suffered a massive blow in recent weeks.

No tragedy for Romeo Power

Romeo Power shares were up 28% at midday on Tuesday. The maker of electrification solutions for commercial customers got a valuable supply contract that could produce plenty of revenue for years to come. 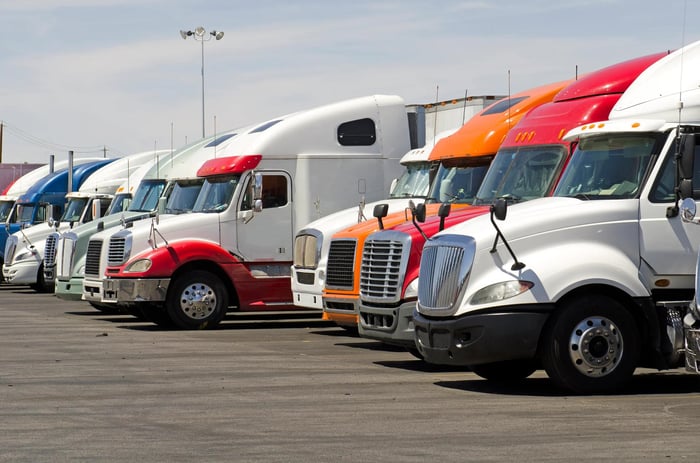 Romeo's new partnership is with PACCAR (PCAR -1.98%), a major manufacturer of commercial trucks under the brand names Kenworth, Peterbilt, and DAF. Under the terms of the deal, Romeo will supply batteries for battery electric versions of PACCAR's Peterbilt 579 and 520 trucks. Although production isn't expected to start until after the end of this year, Romeo anticipates the supply agreement extending through 2025.

PACCAR's support is a vote of confidence for Romeo. The truck maker said that it sees the commercial EV supplier as a key player in making electrification for commercial vehicles not only possible but practical and cost-effective.

Many investors have focused on the consumer EV market, but getting electric-driven drivetrains into commercial vehicles could be a lot more important to the transition from traditional gas- and diesel-powered engines. Romeo recently disappointed investors, but it could have a lot of growth ahead if it can meet PACCAR's supply needs.

A shrug from Credit Suisse shareholders

Elsewhere, Credit Suisse shares were little changed on Tuesday. Shareholders didn't seem fazed despite the release of details regarding the financial impact from the bank's role in the Archegos Capital Management debacle.

Credit Suisse will take a charge of 4.4 billion Swiss francs, or about $4.7 billion, in connection with the hedge fund's collapse. The charge will eat up all of the bank's anticipated profits for the first quarter and result in a loss of 900 million Swiss francs. In addition, the hit will mean that Credit Suisse will suspend its stock repurchase program, as well as slashing its dividend payments by nearly two-thirds.

A pair of executives will take the fall for the risk management failure. Among them are Lara Warner, the bank's chief risk and compliance officer, and Brian Chin, head of Credit Suisse's investment banking unit.

Even with relative calm today, Credit Suisse shares are down almost 20% in just the past couple of weeks. The news shows just how dangerous Wall Street can be these days, and it points to continued systemic risk in global banking despite the painful lessons learned in the financial crisis in 2008 and 2009.