Please ensure Javascript is enabled for purposes of website accessibility
Log In Help Join The Motley Fool
Free Article Join Over 1 Million Premium Members And Get More In-Depth Stock Guidance and Research
By Jim Halley - Apr 6, 2021 at 9:50AM

The Israeli medical equipment company came out with good news on Friday regarding its single-source digital X-ray imaging system, and the market reacted positively.

Shares of Nano-X Imaging (NNOX 4.69%) jumped 17.47% on Monday after the U.S. Food and Drug Administration (FDA) gave the company's single-source digital imaging system 510(k) clearance on Friday, a key step in regulatory approval. Nano-X says its technology could be a disruptive game-changer in the industry because it can significantly lower costs.

What's generating all that heat is the possibility of a different type of X-ray technology that the company says will democratize the use of X-rays in areas that can't afford them now. 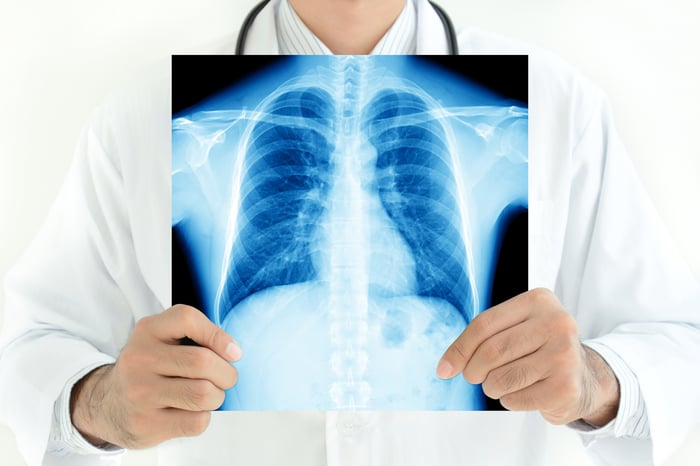 X-rays have been around since German scientist Wilhelm Röntgen first observed in 1895 that certain electromagnetic waves could go through flesh, but not solid objects, such as bones, leading to all kinds of applications, particularly in medicine.

The problem, as Nano-X Imaging sees it, is that the basic way X-ray machines work hasn't changed all that much in the past 100 years. To obtain an X-ray, a cathode's filament circuit must be heated to 2,200 degrees Celsius to emit enough electrons for an X-ray, a process called Röntgen thermionic effect or emission. This substantive heating and cooling makes X-ray machines expensive because they have to be built to sustain that effort.

What is different with Nano-X's technology? The company says it uses nanotechnology to create a semiconductor specifically designed to produce an X-ray, but without requiring Röntgen's thermionic effect. The company equates its product to an LED light bulb when compared to the heat in the filament of older light bulbs. CEO Ran Poliakine said the company could build a full-body scanner for $10,000 in mass production. Typical costs for traditional X-ray machines range from $40,000 to $175,000.

Not everyone is sold on Nano-X's technology. Short-sellers Citron Research and Muddy Waters came out with reports last year that essentially called the company's technology fraudulent. Citron said the company hasn't produced enough evidence to show its product will work and that its research and development expenditure was too small for a breakthrough on the level management was trumpeting.

There's also the basic risk in investing in any company that's not producing revenue yet. Nano-X went public last August through an initial public offering. It lost $43.8 million last year and $22.6 million the year before.

To be clear, this is a big hurdle, but not the only hurdle Nano-X faces before it can bring its Nanon.ARC system to market. Management said they expect to submit a 501(k) application later this year to the FDA. If that is approved, the company expects to begin its initial shipment of 15,000 Nanon.ARC systems by 2024.

Potential reward if you look past the risk

This isn't an investment for the faint of heart. A breakthrough that hasn't yet been proven and has plenty of doubters but not a lot of dollars sounds like a recipe for disaster.

However, if Nano-X can get approval for its product, many of those concerns go away. The company said it ended the fourth quarter with $213 million in cash and no debt. That's a good start, and if the technology is real, it won't be hard for the company to raise money, either by selling stock or through other financing means.

The system could be very disruptive for an industry that, because of the significant start-up costs, has relatively few competitors. Currently, it's dominated by companies including Fujifilm Holdings (FUJIY -0.99%), General Electric (GE 2.35%) Healthcare, and Siemens (SIEGY 2.31%). At $10,000 per device, many smaller medical offices could afford Nano-X's system, and there would be a significant push from insurers for physicians and dentists' offices to use it to keep costs down.

Knowing the perils inherent with this stock, I still believe it is worth taking a smaller position on (depending on your own risk tolerance), considering the potential upside. Consider that the true payoff won't really be until 2024 at the earliest, so this is a long-term play that could easily triple in value.