This upstart is challenging some other recent IPOs.

The stock market posted some modest losses on Wednesday as investors tried to parse economic data to get a sense of whether a rebound in the U.S. economy is likely to continue. With several major market benchmarks at or near record levels, many are still worried about valuations, but others see the hesitation as an opportunity to keep bidding share prices higher. As of 11:30 a.m. EDT, the Dow Jones Industrial Average (^DJI -0.12%) was down 68 points to 33,362. The S&P 500 (^GSPC -0.39%) lost 4 points to 4,070, and the Nasdaq Composite (^IXIC -1.24%) gave up 33 points to 13,666.

IPOs aren't the only means of going public these days, and today another company did it through a special purpose acquisition company merger. That was Innoviz (NASDAQ:INVZ), and its big gain highlighted the importance of light detection and ranging (lidar) equipment in allowing autonomous cars and trucks to drive themselves. It introduces another element of competition into the red-hot high-tech-vehicle space. 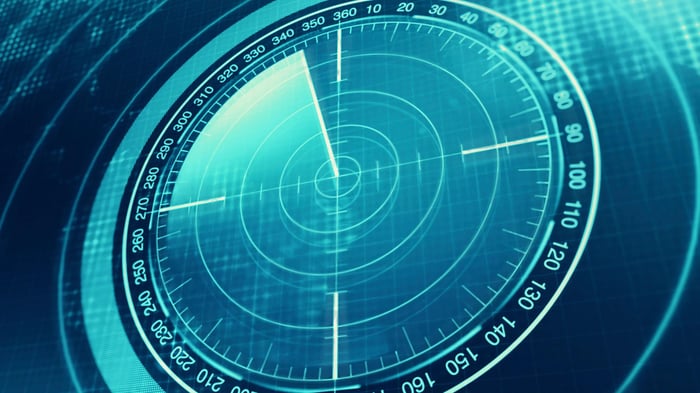 Getting a bead on Innoviz

Innoviz is one of many companies that make lidar sensor systems. Autonomous vehicles use lidar to detect everything from traffic signals and other vehicles to pedestrians and construction roadblocks. The Israeli company's goal is to provide both hardware and software systems that will help passenger vehicles, delivery vans, shuttles, and robotaxis to build in driver assistance capabilities or full automation.

Innoviz announced its merger plans with SPAC Collective Growth back in December. Shares climbed as much as 60% from their offering price after the announcement, but the pullback across the SPAC universe caused Collective Growth shares to give back all of their gains by early April.

Wednesday's 23% gain for Innoviz, however, shows that investors haven't forgotten about the potential in the autonomous vehicle market for suppliers of key systems. Indeed, judging from moves elsewhere in the space, those following lidar stocks are trying to figure out who the winners and losers will be.

Innoviz wasn't the only lidar stock gaining ground. Ouster (OUST -9.48%), which also came public through a SPAC, was up more than 20% on Wednesday morning. Ouster's business goes beyond the autonomous transportation arena, with applications that have found their way into other applications like robotics, mapping, and smart-city management. Yet the big gain still wasn't enough to get the SPAC-spawned Ouster above the $10 per share mark, a key level for most special purpose acquisition companies.

Elsewhere, other lidar providers didn't fare as well. Luminar Technologies (LAZR 7.27%) was down almost 3%, while Velodyne Lidar (VLDR -9.05%) suffered a 6% drop. Luminar has made ambitious plans to capture market share in the fast-growing niche. Meanwhile, Velodyne has struggled since a controversy arose that resulted in the company's founder being removed from his role as board chair, even as it tries to move forward with its own efforts to bulk up its manufacturing and shipping volumes of lidar units.

Electric vehicles and self-driving cars and trucks are getting a lot of attention from investors. But that doesn't mean that every stock in those industries will be a winner. Just because Innoviz is getting some positive attention today doesn't mean it will end up outpacing its competitors. What's more likely is that the more companies enter the same space, the harder it'll be for each of them to differentiate itself. That makes stock picking a lot more difficult and raises the stakes for every participant in the field.